Not all City of London office buildings are huge and flashy; Hugh Pearman enjoys a more human-scaled block on Moorgate which continues a neo-Georgian line with happy abstraction 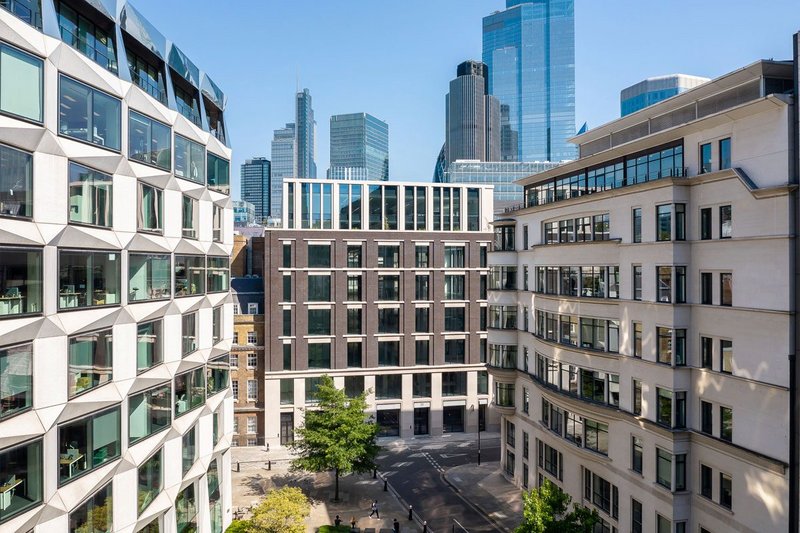 There are numerous Cities of London, in layers going back to the Romans, but existing side by side today are two in particular. There’s the long-distance, skyline, one, the one we view as a cluster of weird, ever taller and bulkier shapes, culminating for the moment in the mirror-glass slabs of 22 Bishopsgate by PLP, which is 202,000m2 of floorspace stacked 278m tall, sized to accommodate 12,000 people. Presumably deliberately visually recessive, it is quite literally the elevation of the banal. We can at any rate be thankful that it is not its abandoned predecessor, the Helter Skelter. Throwing down a gauntlet, surely this one will generate no nickname.

And then there is the other modern City – the tighter grained, midrise version, mostly away from the central cluster, where people are not encouraged to make XXL vertical extrusions and are content to play around with existing blocks and more traditional materials. Here’s a prime example: 77 Coleman Street, by Buckley Gray Yeoman, running through to Moorgate.

This is a familiar kind of architecture these days – the stripped-classical version of modernism, as practised in their various ways by Chipperfield, Parry, Squires, Howells, MacCreanor Lavington, Stanton Williams and others. The architectural historian Alan Powers has mischievously and astutely suggested that you can read some of these buildings as the latest iteration of neo-Georgian. If so, neo-geo has come a long way: 77 Coleman Street faces an early 1960s example of the genre, Girdlers' Hall, a livery company building of 1961 by Waterhouse & Ripley. That is a lifeless classicism-by-numbers exercise, too small, not helped by having an extra floor added in the 1980s.  77 Coleman Street is a statelier composition, abstracted of course.  It too is extended upwards, for despite being seemingly all-new, it is in fact built off the frame of an existing building.

Where Girdlers’ Hall is seen in the round, 77 Coleman Street is in a terrace. Therefore – apart from cheeks that become visible on the upper levels – it displays just a front and a back, and these are expressed differently, for good reason: the busy and intermittently grand thoroughfare of Moorgate has a very different feel to the quiet, almost traffic-free Coleman Street behind. Moorgate gets the full pale-limestone treatment, (Portuguese Moleanos, like Portland stone but denser). Coleman Street makes more of the tripartite-division principle: the same pale stone for a two story plinth, then grey-brown brick with stone dressings for the four levels above that, finally the set-back two-storey roof pavilion which opens up into an open loggia in the top storey of the Moorgate side.  Both sides are properly trabeated, with real depth. Vertical emphasis is given by implied full-height pilasters.

The set-back loggia is a more agreeable way to break down the bulk of a building than that old standby, the mansard roof. And in this case it is no apologetic gesture but a generously proportioned and built rooftop colonnade or long gallery. From up there you can gaze across the rooftops to 22 Bishopsgate and the rest of the central cluster’s architectural zoo. You are only eight floors up, but it feels like plenty.

The architecture of spec office buildings like this generally gets no further indoors than the reception and lift lobbies. The rest is the domain of the tenant fit-out firms. This building is no exception but these days office receptions are lavish, touchdown areas, frequently with a café as is the intention here. The general feel is Deco meets mid century modern. The original coffered concrete ceiling is exposed and extended.

There’s one final twist. The building reinstates one of the City’s little alleys, Nun Court, previously a dead-end yard, now a pedestrian route through from the front with its retail units to the back of the building marked with a rich green glazed ceramic sinusoidal wall. Of course it is permissive rather than truly public, but it’s a nice touch.

All this might seem straightforward but of course it was not. For instance the main entrance is now on Coleman Street rather than Moorgate, which necessitated moving the cores while retaining the frame. Even so, some 78% of the existing 1980s frame, with its usefully high ceilings, is kept: good use of all that embodied carbon.

This is a background rather than a landmark building but it is a considerable cut above the norm, makes all the right moves and is fluently composed and proportioned. At just 5.5% of the size of 22 Bishopsgate, this is the kind of City I feel much more at ease in.