Islamic-inspired gardens are the delight of Maki and Associates’ new Aga Khan Centre, so it’s a pity they are barely visible on the exterior 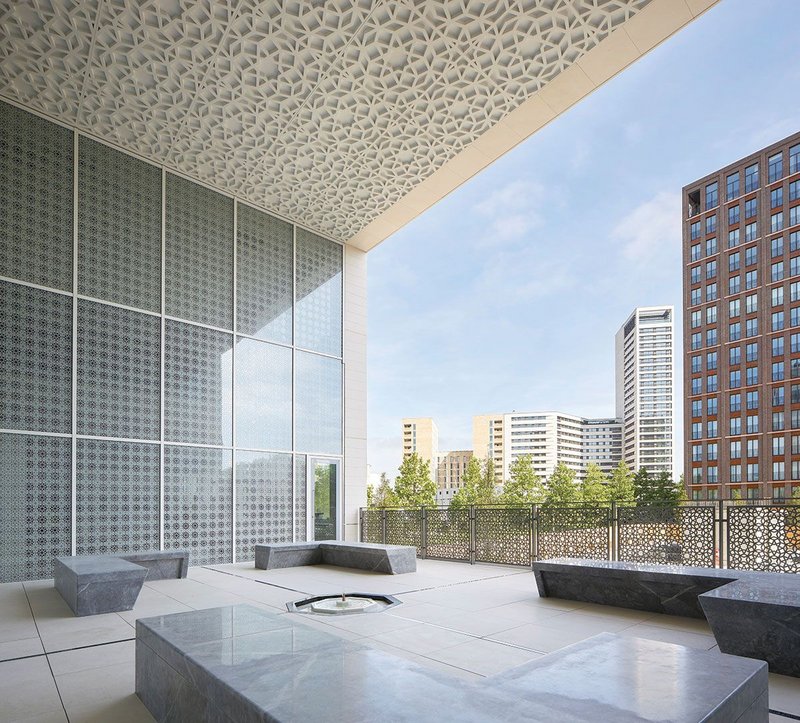 The first floor Garden of Tranquillity, like a covered loggia from Persia, will overlook Jellicoe Gardens below and already addresses the Aga Khan student halls designed by Stanton Williams to the north (brick building far left). Credit: Nick Hufton/Hufton+Crow

‘This is perhaps a strange question to leave to the end of a two-hour press tour,’ I say to one of the representatives who has accompanied the press group around the new eponymously named centre in King’s Cross, London, ‘but who exactly is the Aga Khan, where is he based, and how is he paying for this £50 million building with a “generous private donation”?’

The Aga Khan Centre has been hyped up over the past few years as one of the cultural assets drawn to King’s Cross alongside the Francis Crick Institute, Facebook and Google. When I first heard about the project in 2015 the buzz was that the building was going to be mightily impressive. But for me – and a lot of others on the tour  – it asked more questions than it answered. We’ve all heard of the Aga Khan Architecture Awards, even if we aren’t sure what precisely draws them together. It is legendary Japanese architect Fumihiko Maki’s first building in the UK – but what exactly has he built again?

Aga Khan is the 49th hereditary leader and religious Imam of the Nizari Ismaili Muslims, the second largest branch of Shia Islam. He is a prince, but doesn’t rule over a geographical area. He lives just north of Paris and from there presides over the estimated 10-15 million Nizari Ismaili Muslims worldwide, a denomination that emphasises human reasoning, pluralism and social justice. Now in his 80s, he has spent his later life expanding the Aga Khan Development Network (AKDN), a group of 10 private international agencies, many based in Switzerland but working a lot in the Middle East and Africa, that promote these values through research, education, medicine, the built environment and cultural programmes.

Fumihiko Maki, meanwhile, is the architect most famous for the eclectic aluminium and glass 1985 Spiral Building in Tokyo as well as the rather delightful three-decade Daikanyama mini city project, also in Tokyo, and various big North American-looking buildings all over the world from Shenzhen Sea World Culture and Arts Center in China to Isar Büro Park in Munich and public housing in Lima, Peru.

This latest building, commissioned to unite employees formerly split across rented sites in London, is the third project that Maki and Associates has designed for the Aga Khan. The first was The Delegation of The Ismaili Imamat in Ottawa (2008), followed by the Aga Khan Museum in Toronto in 2014 (RIBAJ, October 2014), both significant schemes larger than 8,000m2.

‘We are calling it the trilogy,’ says Gary Kamemoto, director at Maki and Associates, who has flown in from Japan to take us around the 10-storey, 10,175m2 project. Serving a primarily educational function with a library, offices and 200-plus researchers based there, the centre brings three of AKDN’s organisations under one roof for the first time: the Aga Khan Foundation, Aga Khan University’s Institute for the Study of Muslim Civilisations and the Institute for Ismaili Studies. 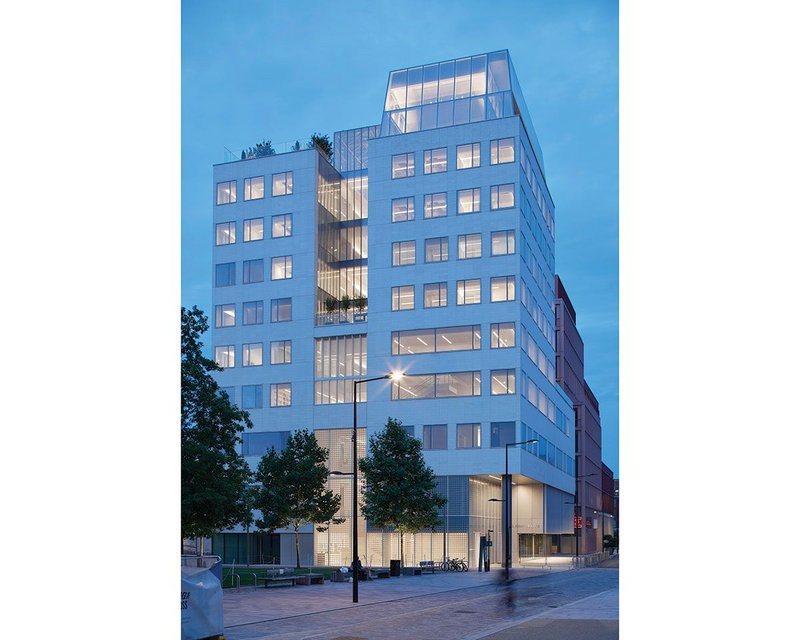 A tripartite composition with a top, middle and bottom. The roofspace is set back to allow light onto the street at ground level. Credit: Edmund Sumner

Along with nearby Victoria Hall, designed by Stanton Williams in 2016 as halls for Aga Khan students, the organisation has bought into the Argent development to be part of what has been dubbed the King’s Cross ‘knowledge quarter’ – to make, as Matt Reed, CEO of the Aga Khan Foundation UK reveals, the most of ‘opportunities in more deliberate and amplified ways’.

The building has, however, also been designed as an invitation for people to explore the history of Islam and the contemporary expression of Muslim civilisations and cultures. On the completely public ground floor, there is an exhibition space and a retail unit that will be a Turkish pizza bar, and six gardens and terraces dispersed across different levels of the block which are intended to become known as ‘the Islamic gardens of London’.

‘My expectation is that from this new home our education-oriented institutions will contribute powerfully to building new bridges of understanding across gulfs of ignorance and parentheses about the Muslim world,’ the Aga Khan explained at the building’s official opening the preceding day.

The site is located to the rear of Central St Martins art college, sandwiched between Duggan Morris’ bubble-gum pink R7 building and the textured black stone commercial S1 Building by Mossessian Architecture awaiting completion on Handyside Street. Maki’s approach, in common with most buildings at King’s Cross, has been to flood the site with volume and then cut away areas for an entrance loggia and the terraces – some shallow and tall, some low and wide. Within this method, Maki has also taken on a modern interpretation of a tripartite composition that is classical in outlook for the exterior: a glazed two-storey base, seven-storey stone middle and an aluminium crown to top the building off – with its angular sloping roof defined by the development’s light cones guidance that allows daylight to reach the streets at ground level. 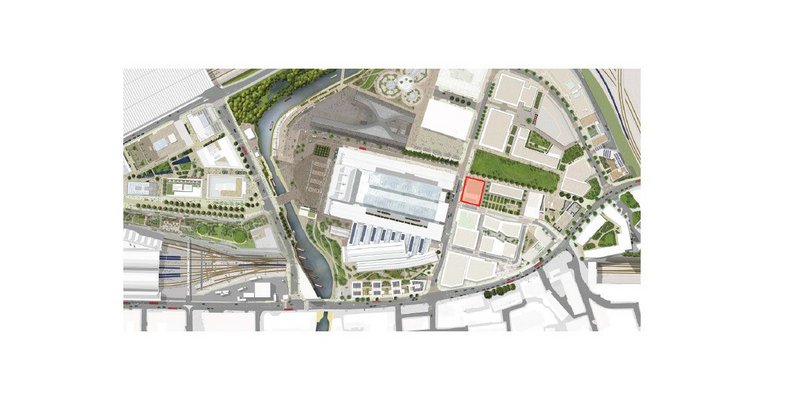 ‘We started by doing an architectural survey of the area,’ says Kamemoto, explaining how the Aga Khan Centre ended up being clad primarily in stone. ‘We found that many new buildings are in brick, but if you look closely at the details of old buildings like St Pancras and around London at buildings built by the Crown, which this is too [a reference to the Aga Khan’s royal status], they are in Portland stone.’ To improve durability, though, as well as use the cladding to meld Islamic culture into the building, the final choice is a very white stone from Andalusia that is incredibly uniform and granite-like. Windows have been pulled forwards to be flush with the facade and coated with a 47 per cent dot point ceramic frit to accentuate these characteristics overall.

Inside, the whiteness continues with plasterboarded white walls across all levels, indiscriminately of function. Entering from the Central St Martins side, the view is drawn past the reception up towards the first floor where the solidity of the building’s external appearance is relieved by a 39.5m tall central void. With two lifts pushed to one side, this rises through the floors, inspired by the central patio of the madrasa where classrooms are frequently arranged in small clusters around a large courtyard. Here, the levels open onto the atrium as balconied terraces.

While the ground floor is committed to public spaces, the first floor and second floors offer collective spaces such as staff and student lounges as well as conference and seminar rooms. In this vertical campus, the library sits in the middle on levels three and four, easily accessible both from below and the offices of the three institutions above – the university on levels 5 and 6, the Institute of Ismaili Studies on level 7 and the Aga Khan Foundation UK on level 8. The top floor is for ceremonial activities, including executive meeting rooms. Except for this floor, which has two more finely considered rooms, in general the interiors are defined more by their furniture and contents than by their architecture, appearing as white and non-specific as generic speculative accommodation. With so little to look at, though, it is impossible not to notice how beautifully detailed everything is. The only deviations from this pureness are the specially commissioned blue, red, yellow and green geometric artwork by Pakistani artist Rasheed Araeen, which saves the atrium from looking like an early 2000s hospital by throwing colour across the tallest wall; and perhaps the eight-sided pattern Maki composed for the scheme, which is used in different sizes on everything from glass frit to flooring and acoustic ceiling panels – though the motif is so mass-produced across the building that it too could be easily integrated to add interest to speculative offices in this computer generated and made age. 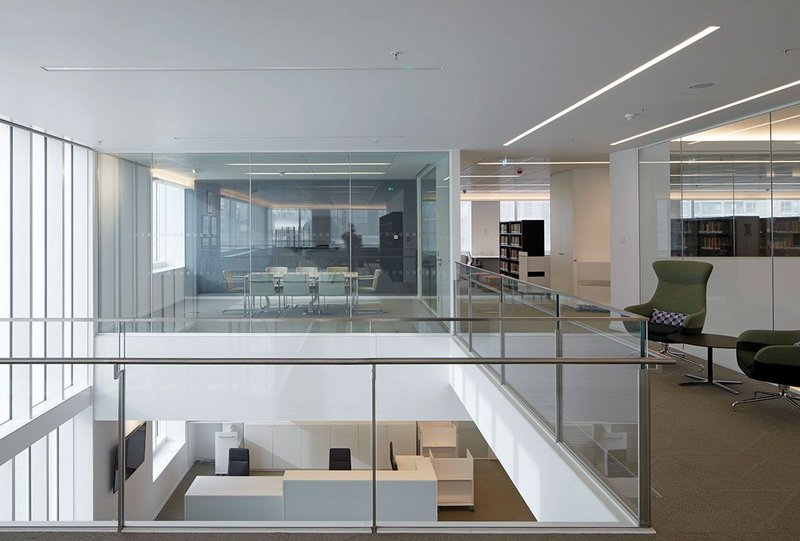 The upper level of the two-storey library in the middle of the building stack. Bookshelves are black to make glistening spines stand out. Credit: Edmund Sumner

The terraces, however, are the delight of the new Aga Khan Centre and lift it from being just another King’s Cross commercial or resi block into something unique. Every function in the building has an associated garden inspired by a different Islamic type from around the world. There are six in total and they create a sequence across the building, starting with the Garden of Tranquillity on the first floor which is inspired by the covered loggias of Persia and Egypt, a garden overlooking another garden, in this case the upcoming Jellicoe Gardens. The sequence ends with three gardens on the rooftop. The largest, the Garden of Life designed by Madison Cox, is a Mughal Empire inspired space with a Chadar waterfall through the centre, while the Garden of Light looks to the Islamic courtyards of Andalusia with patterned screens carved with extracts from the Qur’an and Persian poetry. The third, the Terrace of Discovery, is the most arresting. A long narrow sliver of a terrace on the southern aspect of the building, it is inspired by the Persian talar, a throne from which to address the congregation. Looking out over central London from this height, the majesty of the platform, with its blue and white tiled floor, does indeed make you feel as though you are addressing the city.

The only problem is, despite being planted with pomegranate trees, magnolias, quince and witch-hazel, the gardens are not really visible from the street. This means the best part of the building fails to illuminate the exterior, resulting in a perfectly palatable but plain building that won’t help people understand who the Aga Khan is, let alone the centre’s activities. It ends up lost among its fellow cuboid massed neighbours, within the restrictive parameters of the King’s Cross plan.

Except for those who know they could be sipping hibiscus juice on one of those terraces, the building is unlikely to remain the talking point it has been these past years. Indeed, you don’t really appreciate the building urbanistically until you see it from afar, pootling along the raised train tracks that circle King’s Cross. From there, in the brightness of the blue-sky summer heatwave, the brilliance of Aga Khan Centre’s flat white stone facade finally bristles with a kind of eye-catching excitement. That makes it worth it.