Cob Corner is a solid house with unexpected holes 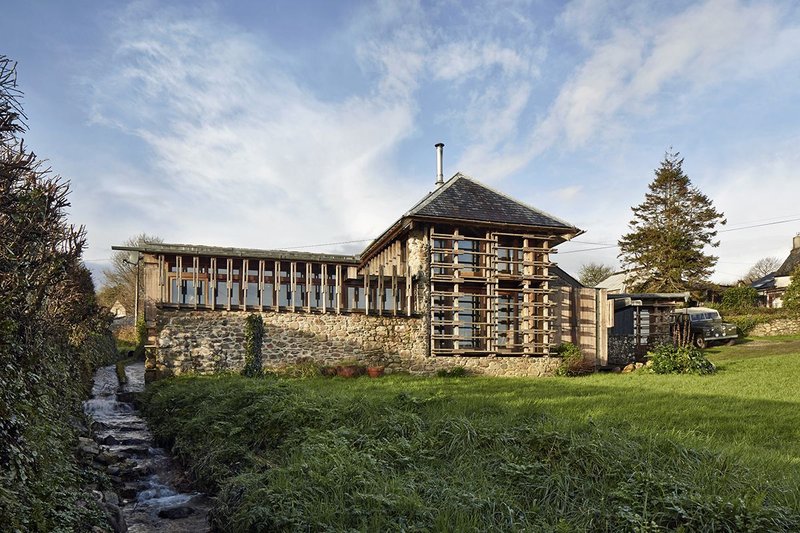 The three volumes of the original barn are still visible in the rebuilt Cob Corner. Credit: Joakim Borén

A steady sun warms the stones, sweetening the raspberries, drying meadow grasses. Cob Corner faces into it, patterns of deep wooden louvres turning the house into criss-crosses of light. Architect David Sheppard would love to design his own new home from scratch, by the sea. Here, for his home and studio in this inland corner of Devon, he inherited cob walls, the massing of barns, a rushing leat on their edge and the corner of a shallow valley.

But he actively chose these conditions – taking a risk on the site even after others had been refused planning under a regime that prohibited more than a 10% rebuilding of barns.

Sheppard put down a hefty deposit and agreed an option to buy from the farmer, if he got permission, then set about building a case that he was merely filling in the gaps between the barns’ dilapidated walls with glass. Not really wanting a glass home, he bought 250, 40mm thick, hardwood panels, previously used for stacking engine mountings, from a salvage yard and these layer the glass, acting as a foreground to the valley landscape.

The three segments of the old barns maintain a certain separation: a studio and courtyard; the main barn volume with kitchen below and living room above, both defined by the lumps and bumps of the cob wall; and to the side cellular spaces of small bedrooms. The crux between living and sleeping is a staircase of green oak, still massive though it has shrunk into place over the 15 years that this house has been in the making.

Repairs were in keeping but, like much in this house, expressive detail and the story of the making is kept visible. Perhaps this was easier as Sheppard’s brother was the carpenter in the early stages. Pegs securing the beams project rather than being sawn flush, and cross beams were added to the A frame in green oak to bolster the roof over the living room. This is craft hi-tech.

Cob Corner is a very solid house, with its river stone and cob walls, slate roof and wooden floors taking over from crumbling breeze blocks and rusty corrugated iron. Yet what marks it out are the gaps, the skipping syncopation of the timber louvres to the front of the house, the slim lines of glass delineating the panels of the studio walls, the spaces between shrunken green oak posts.

There are unexpected holes in walls, windows to the lane at ground level alongside the bedrooms and huge sliding doors and slatted hinged panels where the hay would have been loaded into the loft – now allowing the ­manoeuvring of a grand piano or Christmas tree into the first floor living room. The ­panels on the studio open onto the courtyard or close the building right down. The gappiest gap of all is the way the floors are pulled back from the cob wall at first floor level so that only the rafters visibly meet the wall, a reference to how stored hay used to be pushed over such an edge to animals below. These elements add a complexity that such a handmade building might miss out on in the logic of construction.

The marks of a loved home, with inventive detail, are visible in the sliced column of grinding stone making steps into the courtyard and the cross-section of tree trunk that pivots to cover the loo window for privacy.

Over time Sheppard and his wife have made other changes – interestingly, using permitted development for small additions that would probably not have got through in the original planning permission. One is the boot room and porch, which insulates the kitchen from draughts and damp coats, its glass roof cutting apparently unfeasibly into the stone wall (the 100mm seal helps). A semi-circular drum of vertical black-stained timber on the front of the bedroom wing has given two bedrooms their own showers. A switch of the sliding doors means French windows have become bathroom doors and a fixed panel looking onto the raspberry bed – though what sounds simple was obviously a complex combination of screws, sliders and rehanging so as not to waste this investment in good doors.

The green of the fields, visible from much of the house, is a reminder that water is as essential as sun to this agricultural landscape. No matter the weather you enter under an outsized lead gutter, which has its parallel in the leat at the other side of the house, and somehow embeds you in its landscape of the Erme Valley.