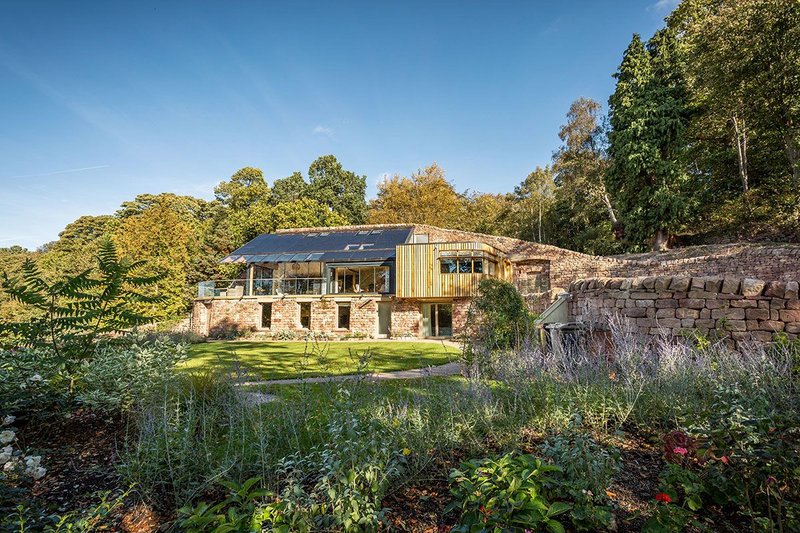 When you are an architect and the opportunity arises to design your own house on your own land, then how you express that says a lot about you. Derek Latham – founder of the highly successful, multiple award-winning Derby-based practice Lathams – took it as an opportunity for research into a practical very low energy house using local materials and labour. This was a project for himself and his family that he could take some time over: the project spanned his retirement from the practice. It is also designed as a ‘lifetime home’ so that it remains habitable and accessible as he and his wife – local MP Pauline Latham – get older.

I arrived on a day of rain and gales, but inside the thickly-insulated house all was calm. It is set up on a hillside in Derbyshire, on a lane running out of the village of Little Eaton. This is where the last foothills of the Pennines fade out into the Trent plain. Now something of a dormitory area for nearby Derby, Little Eaton used to be an industrial centre and to some extent still is, down by what was once a wharf. Here a branch of the long-defunct Derby canal terminated, to meet a horse gangroad descending from collieries and quarries up above. The horses, Latham recounts, would haul the empty wagons up the plateway into the hills and then – once they were loaded – would stand in their own trucks for a free gravity-powered ride back down. (As an aside this was an early example of containerisation: the coal containers were detached from their wagons and craned directly into either boats or road carts, returning later as empties).

A remnant of those extractive-industries days is a defunct quarry at the back of Latham’s land here. Long-term residents of the big Edwardian house just above, the Latham family had lived there for years, making various modifications. ‘We were always going to build a house in the garden, but this is Green Belt, so it was a case of getting planning permission as a Paragraph 55 house,’ he says.  That permission for exceptional design came eventually because of the earth-sheltered nature of the house with its green roof, expressed as an inhabited bulge in the drystone retaining wall that supports a garden terrace behind. The tilted monopitch photovoltaic roof is reminiscent of a glasshouse, the timber-clad kitchen section more fancifully like a shed – the idea being that these were the kinds of lean-to outbuildings that such a house with large grounds would have.

Latham financed the project by dividing the land in two, building the new house on the lower section and then selling the previous one. The Lathams, then, have downsized and down-gardened – though with grown-up children and guests in mind this is still a sizeable four-bedroom house. In the process they have discovered the positives and negatives of using sycamore as a building material and of being your own construction manager.

There was plenty of self-seeded sycamore in the old quarry, so Latham was curious to see if this usually overlooked timber could be used for something other than firewood. And in the end it was – made into laminated timber beams for the house’s roof structure and sawn into narrow planks for the flooring, used as cladding – but getting to that point was quite the saga.

The first tree they took down was cut up and sent for testing at the university of Derby. It behaved impeccably, with a strength similar to oak. ‘It worked a treat,’ says Latham, ‘but the next 30 didn’t.’  It transpired that English sycamore can be OK if it is growing straight up from a flat site, but that internal stresses in its spiralling structure build up if it is growing at an angle. In his quarry, trees growing at an angle were in the majority. The wood from such trees easily warps and cracks when cut. It seems the English variety of sycamore is more prone to this than those growing in colder climates. In the end only five out of 36 trees were stable enough to work, and even then there was a lot of wastage. He could have started a one-man firewood business.

Then there is the way that sycamore timber is prone to rot and insect attack, so you have to position and detail it carefully. But Latham doggedly stuck it out and eventually achieved his desired result, building a kiln in his joiner’s workshop to dry the timber before laminating it to make his beams and columns. Floorboards are narrow to reduce warping problems. More sycamore went to make built-in furniture. The effect is rather like maple. Elsewhere he uses cherrywood.

The timber, though, was only part of the story of the house. Latham had a contractor go bust which apart from all the usual misery, meant that his carefully-detailed photovoltaic-panel roof – part of the architecture rather than being a gob-on – never got certified. That in turn means that that he is not yet allowed to sell his power back to the grid. ‘This is probably an energy-positive house’ he muses, ‘but for now we can only call it a reduced-energy house’.  He then became in effect a management contractor, employing workers on a self-employed basis who had been laid off from the contractor. That wasn’t great either, as they had a tendency to take up steadier jobs elsewhere when they arose.

But, eventually and slowly, it all happened, with engineer Price and Myers doing the calculations. The sloping site – previously a vegetable garden – was levelled by digging into the slope behind and re-using the spoil in front. Two concrete slabs – one horizontal as raft foundation, the other vertical and very thick to act as a retaining wall to the land behind – are made with 60% PFA (pulverised fuel ash), with recycled aggregate and steel rebar. The vertical slab, with a thickness of 350mm, acts as a passive solar temperature regulator. ‘It has amazing thermal capacity but of course is very unresponsive. It took three months to get it warm.’

The main structure is timber frame. Internal walls are of Fibrecell compressed board on sycamore studs with hemp insulation. Insitu hemp lime composite forms the front wall core construction, while hemp lime composite pre-cast panels are used at first floor. As a technique, he says, hemp lime (or hempcrete) behaves less like concrete than a traditional material such as cob (or wattle and daub): fine for infill, good for insulation and carbon sequestration, no use structurally. The outer wall is made with stone from the quarry spoil – not good enough quality to make dressed blocks, but fine for the dry-stone walling technique. One man slowly did it all.

The house is arranged in three layers: bedrooms and bathrooms (and utility rooms and workshop) at lower garden level, living/kitchen/dining spaces on the main entrance level above, and then a curved mezzanine office level above that, looking out over the living area and through the glazing to the view beyond. That is made of a structural plywood hull, requiring very little support from below.

Other materials used include sheep’s wool insulation in the front roof (beneath the PV panels) and breathable lime plaster. The rear roof has a wildflower meadow over insulation over another ‘green’ concrete slab.  Stack-effect ventilation is pre-cooled (or warmed in winter) by an earth tube. There is an air-source heat pump, there are insulated shutters. Drinking water comes from a deep borehole, while rainwater is harvested for toilet flushing and garden irrigation. The house has its own small underground automated sewage treatment plant which produces a cleaner residue than a septic tank. So it is almost, but not quite, off-grid: an electricity connection is still required for two-way connection to the grid.

The overall construction cost was around £900,000, estimates Latham, for an ultra-bespoke house with an area of 2,500ft2 plus a garage (also set into the bank) of 500ft2.  I’m assuming he’s not including his own time as designer, contract manager and partial self-builder.

The house’s envelope is so efficient that he cannot have a wood burning stove (all that waste sycamore, remember) because it would produce too much heat. ‘I couldn’t get a wood burner with an output of less than 5kWh, which is all you need for the whole place,’ says Latham. ‘The heat in the house is so stable that a wood burner would simply overheat the place quickly. So either have air/ground source heating or a wood burner, but not both!  And a wood burner still puts carbon in the atmosphere.’ Instead he has a low-output alcohol-burning stove for occasional visual effect.

So there is a lot of ecological effort in this house, and as Latham notes, a lot of lessons too. He could not have treated a client’s house as such experimental project or taken the risks he did, nor suffer the delays. The materials and construction methods he used would have made getting a mortgage difficult, and there was quite a bit of negotiating when it came to Building Regulations. But an experienced architect trying new techniques on his own house is a fine thing. This part of Derbyshire has no shortage of prominently-sited flash hillside houses but this is not one of them. It emerges as if from the soil, which is pretty much exactly what it did. The sequence of interior spaces, and the relationship of the interior with its surroundings, is exemplary.  And at a time of concern among architects about their response to climate emergency and species extinction, it has a very light footprint.