La-la-land on the outside and Bat Cave within, RSHP’s new distillery and visitor centre for Macallan leaves the nose empty but the eyes popping 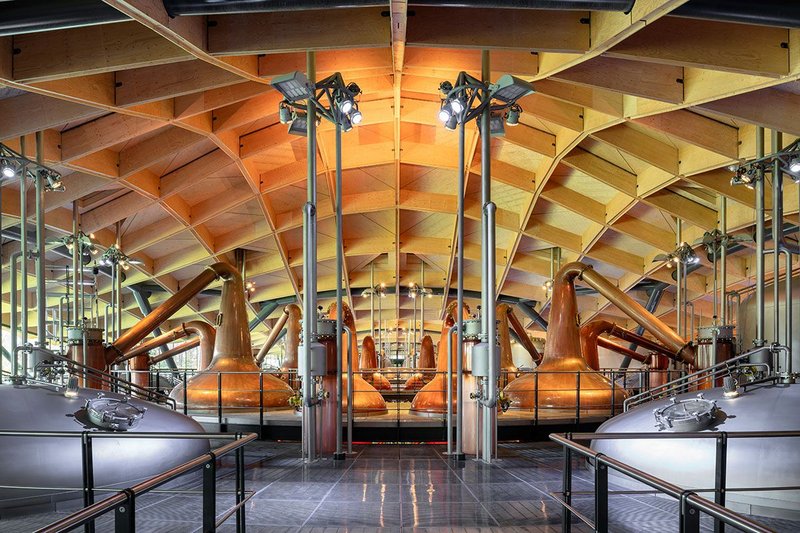 It’s a curious building that to ordinary members of the public, who have never heard of Richard Rogers or RSHP, combines Teletubby La-la-land architecture on the outside with the menacing darkness and subterranean drama of Christopher Nolan’s Bat Cave on the inside. The two images hardly go together. Add a layer of popular culture to perception of the Macallan brand – James Bond’s penchant for the drink and that scene from Skyfall where a tot of the fine smooth scotch is used as a target on top of actress Bérénice Marlohe’s head – and you end up with a staggering blend of references, as well as architecturally considerably confused.

But roll up the tartan and put away the tweed, because Rogers Stirk Harbour + Partners’ new £140 million distillery and visitor centre for premium whisky maker Macallan is a beguiling building designed to impress and overwhelm. Is it a giant rectangular meadow-topped magic carpet rippling over the crest of the hillside like a stingray along the ocean floor? Or a Soviet bunker semi-attempting to hide from view, rolling up over the hill from the banks of the gushing, bouldered river Spey which gives this whisky area north of the Cairngorms one of its principal ingredients?

Whatever the simile – and these are just from asking whoever happened to be around – grabbing public attention is the aim of this building. And, with its thrilling architectural mix of slow reveal and intensity, it is difficult not to come away fascinated by it as a building, by Macallan, and sans bottle of 12-year-old £60 first fill sherry-cask whisky in hand as a souvenir.

‘Over the past 20 years as the scotch market has become premiumised, Macallan has been constrained by the amount of liquid it was able to produce,’ explains Macallan’s engineering manager George McKenzie. ‘For the last five years we have not been able to increase volume of sales … but with some fairly clever sales and marketing, we have ridden the crest to take Macallan out with the luxury brands and beyond.’

The intentions for the new building, therefore, were twofold. First, to increase production to meet a seemingly insatiable global demand (90% of Macallan is exported), and second, to use the resulting distillery as an opportunity to enhance the magnetism and lustre of the brand.

‘We are now marketing ourselves alongside the likes of Bentley,’ continues McKenzie. ‘That allows us to command some really high prices, so the board wanted a home to reflect that status – a place for visitors, aficionados, entertaining overseas distributors and high net worth individuals.’

After investigating the option of building a basic distillery with a high-quality visitor centre attached (which would have cost £55 million), Macallan put the project out to competition, inviting 15 architects to submit expressions of interest. The brief was relatively open: it had to produce 15 million litres of whisky per year with the possibility of expanding to 20-25 million litres, the drink had to retain its character, and it had to be a world-class building and visitor attraction.

Fourteen practices replied, and over a year, these were whittled down to five, and then to two – RSHP and Herzog & de Meuron. In this area of great landscape value, where Macallan has become accustomed to burying and hiding to appease influential local landowners, an underground building seemed most appropriate. In contrast to Macallan’s previous visitor centre, which was more of a shop and a tour, RSHP’s approach was to combine both elements – distillery and visitor centre – in one building, the former in full view of the latter as a celebration of the modern distilling process.

‘It was very difficult to put a self-standing building in the landscape,’ explains architect Graham Stirk, ‘so it became a landscape building.’

Dug down 10m into a slope on the site of a former barley field, the 220m-long undulating row of five ‘mini Ben Rinneses’ burst through the slope on this side of the valley covered in wild flower meadow – parched at this moment.  Numbers one to four are raised as external expressions of the circular distilling cells inside while five, slightly taller than the rest at 17m, signifies the entrance and visitor hub. Around this floating island shafts of earth have been excavated to connect the building to features in the landscape – the 17th century Easter Elchies House, where Macallan’s story began, two new concrete chimneys (one for the CO2 by-product, the other for steam) cut adrift from the main body of the building at the end of polished concrete retaining walls, and the service road behind, sunk into the hill at the point of the building to make it disappear. Driving round the bend, following the rhythm of the roof between the pine trees to the entrance, the complexity of the building becomes apparent through the glazed curtain wall, enormous gable end warehouses rising like majestic terracotta soldiers behind. 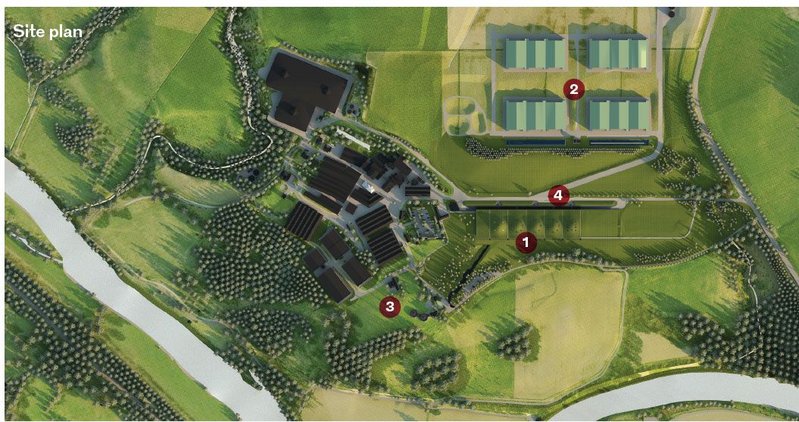 Through the deep, cave-like threshold you are transported from light, air and grassy nature into a below-ground experience of darkness, polished surfaces, moon doors and atmospheric coloured lighting thrown across walls, building guts, stills and pipes. Ahead the reception is recessed into a giant freestanding open top cylinder  containing a core for entertainment including a tasting bar, two VIP drinking lounges and a cellar, which sits like an enormous barrel below the exposed double parabolic glulam grid roof. To the left, a wall of whisky introduces Macallan’s 194-year history in bottles, alongside the ‘jewel box’ – a interactive exhibition space. To the right is a boutique arranged in glass cabinets like a museum and a view through a glazed separation wall into the mechanical underbelly of the distillery behind.

The typical tour begins upstairs. Under the vault of the roof, within the distillery itself, the full workings are on display, with grille floors showing the plethora of equipment underneath. You are hit by the intense heat and loud whirring of the machinery. Sparkling stainless steel and copper stills are arranged as a series of circular modules, one under each dome, of which three are in use, each producing 5m litres of spirit a year. The technology is Victorian in its appearance and its arrangement classical and temple-like in form. This module format means the building can, as per the brief, cleverly increase production in future by building more humps on, and indeed Macallan is already anticipating moving into the spare fourth pod in 2023.

Yet as McKenzie explains, ‘No engineer would dream of building a distillery in a circular fashion; normally the process would be separated into parts from one room to another for risk of explosion.’ The process is the same as before, using Macallan’s ‘curiously small stills’ – just in a configuration that enhances the theatricality of the experience.

And throughout, this sensationalising the image of the process through its architecture has been prioritised over displaying the raw genuine engineering of a distillery, because this is largely where the building ends. In the colour-lit cellar, for example, casks line the curved walls while a highly polished floor and ceiling give the illusion of an infinitely vertical space. It’s a marvel for entertaining high-paying guests with elaborate dinners, but far from the tightly packed, racked, creaky looming warehouses storing the bulk of Macallan’s stock behind. And trapped behind glass, at no point on the tour do you get to sniff the amazing aroma of scotch maturing in its barrel. That moment you’ve been waiting for never happens, leaving the experience a bit lacking compared with, say, visiting a winemaker’s cellar in Bordeaux, or a port distillery in Vila Nova de Gaia. Likewise, the filling station, blending and bottling all take place elsewhere so the visit is not comprehensive either.

Don’t get me wrong, Macallan’s new visitor centre and distillery is as crisply cut as a Savile Row suit – finished with an elegance that disguises the effort of its making. But what this means is some of the most interesting parts of the scheme – like the those warehouses which are being built at a rate of 6,000m2 per year,  the boiler room which took three people three years to design, and service yard with its 9m concrete retaining wall, crossing pipes and stairs – are the ones you don’t actually get to see. These parts, purely engineered, reveal the elsewhere indulgent showmanship of the architecture, although note that RSHP had to overcome hard challenges to achieve it, particularly around energy use and fire (the building is more similar to a petrochemical plant than a winery).

The drama and glamour nevertheless earn their own praise. Here we come back to Bond and the badass architecture of Batman, as well as Macallan’s public face. RSHP’s building is the biggest ‘clever marketing’ device I’ve ever seen. With it, Macallan has left the other 41 Speyside distilleries behind and propelled itself even further into the hyper luxury world of Virgin Galactica spaceports, Mclaren engineering centres and Rolex visitor hubs. Drunk on luxury, the building is part of a wider, often British architecture, that has become less pop and more suave, smooth and rich, like the maturing whisky here and the heads of practices that lead this type of work.

Taking in the curves and contours of the landscape, this architecture hijacks land art – those hills, excavations – for the purposes of commercialisation to create buildings designed to be seen from the cockpit of an aeroplane or the back seat of a helicopter – as no doubt aspirational visitors would prefer to arrive. Floating in this elite super realm above the ubiquity of brick, these architects are transforming an ecological movement to bring luxe to landscape that crashes into bling. Buildings like this don’t come around often and their critique must work on a different level too. I don’t feel like I’ve been to a whisky distillery. It was a distinctly unScottish experience. But the building is dramatic, disorienting, entertaining and leaves a lingering sensation of excitement and awe on the palate. From that point of view, and Macallan’s, the building cannot be considered anything but a resounding success.