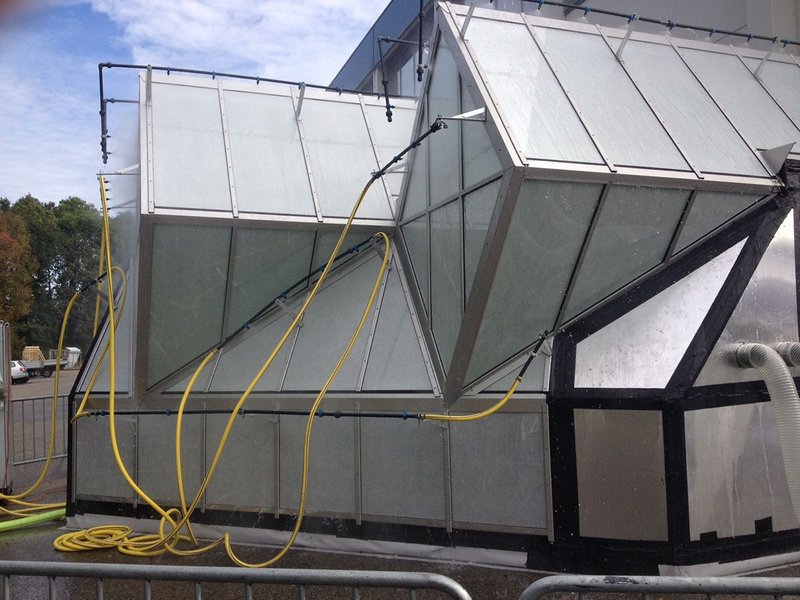 With its iconic red 12-storey tower and jagged flanking roofscape of diamond-shaped skylights, the grade II*-listed University of Leicester Engineering Building is one of the UK’s most easily recognisable buildings.

The factory-like construction was the first example of post modern architecture in the UK – a riposte to the postwar trend for glum functionalism – which made the reputations of James Stirling and James Gowan.

But the wild ambition of the design was far ahead of its technical performance. The complex roof, set at a 45° angle to bring north light into the workshops and research laboratories alongside the tower, was fabricated and installed on site by hand using a flimsy aluminium stick system. The glazing comprised just two thin sheets of float glass, separated by a fibre glass mat.

Over the years, the roof suffered from leaks, draughts and extremes of hot and cold, but a lack of safe access made it too risky to send anyone up to carry out repairs.

Now a £19.5 million project is under way to replace the 2,500 glass panels in the roof, and the glass facade of the laboratory block, with a precision-engineered weathertight skin able to comfortably house the engineering department for another 50 years.

The hugely complex refurbishment, part-funded by the university with a loan from the European Investment Bank, involves stripping back the original roof to its triangular trussed steel frame, then wrapping it in a high performance layer of glass and aluminium.

Peter Bale, project manager at the University of Leicester’s estates and facilities management division, says: ‘The project was a long time in gestation and the more we looked at it the more difficult it got. Essentially we are following the same path as the original architect but are also taking into account the large deviations and misalignments of an older structure, and much stricter performance and safety standards – all under the scrutiny of Historic England and the Twentieth Century Society.’

A £19.5 million price tag may sound steep for a roofing project – the same sum could have bought a new purpose-built engineering block – but the university was keen to keep the engineering faculty in its original home, which raised the specification level.

While students in the 1960s used workshops to carry out large scale experiments that were often set up and left to run, today’s use computers to develop designs and simulations, so need a comfortable environment with proper heating, cooling and ventilation.

There was some debate over the suitability of the solution, says Catherine Croft, director of the Twentieth Century Society: ‘Part of me thinks it would have been better to find a new use for the building that more closely matched the original use, perhaps a venue for bands where it would not matter if it was a bit chilly and a bit of rain got in, in which case a like-for-like replica could have been installed. However, it was hard not to be sympathetic with the engineering department’s desire to stay put, and a huge effort went into refining the system to make it as authentic to the original as possible.’

Like the original, the new roof is a stick system, comprising a prefabricated subframe of anodised aluminium, fitted with individually installed mullions, transoms, and insulated double glazed panels. It includes 84 ‘diamond ends’, geometrically complex frames located at the end of each truss with glass intersecting at various angles.

The glass and its support structure are robust enough to resist the weight of a person falling from above, without collapsing or shattering, and to prevent negative wind pressure from sucking the glass out – something that was never a problem for the draughty old roof.

A-rated double glazed units, manufactured by Ocalux, replicate the grey tint and interlayer of fibreglass matting used in the originals, but are over three times as thick, doubling the weight of glass on the building. As a result, the aluminium glazing bars are 6mm wider than the originals, at 38mm, but are still well below the equivalent standard facade.

Attention to detail has bordered on the obsessive. Discussions over what could be seen behind the line of the pressure plates on the glazing took almost two months to resolve

Every component of the structure had to be assessed and passed by the client or Historic England before installation. A plan to install automated windows to naturally ventilate the workshops in summer was rejected because the openings would be visible from the tower. Instead, replica versions of original air handling units, costing an eye-watering £27,000, and new chillers installed under the roof, will cool the interior.

Installing a complex roof, with multiple intersections, on top of a 1960s structure with large misalignments, tested the expertise of specialist Fill Metallbau.

Every double-glazed panel in the system had to be unique so the skin could mould to existing steel trusses. Yet Historic England insisted that all the original lines of geometry flow into one another across the entire skin, requiring installation tolerances of -2mm.

With limited wriggle room, a bespoke parametric modelling software was developed to monitor the installation procedure and identify any issues in real time. As each individual panel is temporarily fixed in position, the sample co-ordinates are relayed to Austria and run through the software to assess the impact on the overall system and ensure no cumulative errors emerge.

The complex nature of the project has resulted in a few teething problems, pushing the expected completion date back from the end of the year to March 2017. It’s a concern, given the already inflated budget, but perhaps inevitable for a landmark building that has resisted conventional heritage thinking.