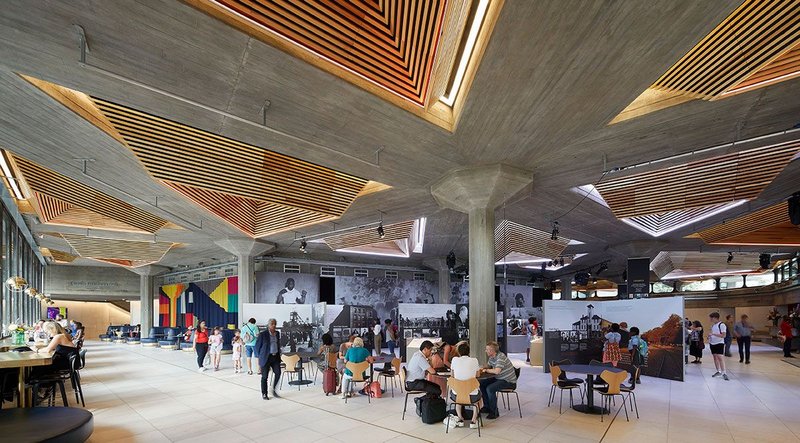 ‘We treated them as if they were listed. We took care of them,’ says Feilden Clegg Bradley Studios’ Richard Battye of the practice’s £35m refurbishment of the brutalist arts venues at London’s Southbank Centre. The listing reference is particularly pertinent given the recent decision by the Department for Culture, Media and Sport to turn down the complex for listing and instead issue a Certificate of Immunity, just a few years after the centre proposed, then abandoned, more extensive and controversial plans.

The recently completed refurbishment of the Hayward Gallery, Queen Elizabeth Hall (QEH) and Purcell Room was actually always part of that larger plan according to the architects, who say their appreciation of the 60s complex grew during the course of the project.

‘We liked it but we love it more now. We became more impressed with the robustness of it,’ says FCB Studios managing partner Ian Taylor of the Southbank buildings, adding that they’re of a quality that merits listing.

The radical complex was developed between 1963-1968 by the London County Council’s Special Works Group of architects, which included Archigram’s Warren Chalk and Ron Herron. There’s no denying that after 50 years, these buildings, however much they were admired for their cultural activities and – by many – for their brutalist concrete aesthetic, were in dire need of an overhaul. Half a century of use had affected building services in particular – cooling hadn’t been operational in the QEH since the 1980s, and in the Hayward staff sometimes preferred to leave gallery scene-setting lighting on overnight rather than trusting that it would turn on again the next day. Key design features had been compromised, for example the Hayward’s pyramid rooflights, which had long been obscured internally by a suspended ceiling.

That’s not to say that the changes weren’t significant. The brief was to overhaul everything, from front and back of house to performance spaces. At the QEH, the architects have ingeniously harvested former under­croft space at the rear to provide 300m2 of new back-of-house including dressing rooms and an artists’ entrance, the latter with dramatic views up of the building through a lightwell.

The always striking public foyer, shared with the Purcell Room, is greatly improved by the repositioning of the café bar. This enables the corner to the left of the entrance to be opened up with the insertion of new windows to the riverside, a bold intervention which nonetheless appears seamless.

The bar design by Archer Humphryes creates a far fresher and more sociable space with the inclusion of a new café and long bar plus new seating including plump banquettes and window seats along a shiny brass counter. With its hand-made tiles and zippy colours, it’s a sharp but generally pleasing contrast with the exposed concrete interior, which is quite strong enough to take it.

The practice sought to enhance the original character of both auditoria, which have been refurbished with new seat upholstery, production infrastructure, lighting rigs and services. Timber wall panelling was French polished again and the board-marked concrete restored, as it was in the Hayward. This shows off the high quality of the concrete, which was cast, FCB Studios discovered, using formwork crafted by a team of some 180 skilled site carpenters.

One of the biggest challenges was overhauling the services to create comfortable auditorium conditions with minimum intervention to the building fabric.

‘The thing that made the building difficult, and interesting, was that in the existing services strategy, the distribution of air was very much integral to the fabric and form in a way you don’t get with modern buildings,’ says Peter Creaney, an engineer at building services engineers Max Fordham. ‘The challenge was to reuse existing routes to bring them up to modern standards.’

In the QEH, this meant an ingenious reversal of the airflow to introduce air through redesigned grilles beneath the seats and discharge it at high level rather than the other way round. This lower-energy displacement system provides a more comfortable and stable auditorium environment. The small amount of extra plant involved has been elegantly contained in a glass enclosure on the roof. At the Purcell Room, the engineers replaced the air-conditioning and added cooling and humidification control.

At the Hayward, the design team faced several challenges: overhauling the fabric (notably the leaky rooflights); upgrading the services; and realising the gallery’s long-held desire to reintroduce top-lit lighting into its upper spaces. All this had to be achieved while providing optimum conditions for display. The design team succeeding in providing 50 percent relative humidity at a set point temperature of 20°C all year around.

The 66 single-glazed pyramid rooflights, so central to the Hayward’s visual identity, were too far gone to salvage and had to be completely replaced, although this was done so sensitively that few would now realise. But their replacements’ improved solar-shading functionality, in combination with adjustable blinds and acoustic coffers below, has enabled the galleries to be top-lit once again with controllable natural light. Post-refurb, the gallery uses 50 per cent of its pre-refurb energy. Throughout the galleries, the architects have replaced terrazzo floors and cleaned the walls.

Yet despite all these – beneficial – interventions, the architects have succeeded in their aim of retaining the essential ‘Haywardness’ of the gallery rather than producing a bland white cube. The Southbank Centre has also reorganised the Hayward’s foyer, shop, project spaces and café, the latter now relocated above the entrance.

FCB Studio’s refurbishment is now complete, but further changes to the setting of the centre are likely. While the Certificate of Immunity is disquieting for fans of the brutalist arts complex, for now it is probably looking  – and working – better than it has done at any time since it first opened. With summer crowds strolling along the South Bank enjoying the centre’s cultural and hospitality offerings, and with children frolicking in the fountains in the sunshine, it looks every bit the story of success and longevity.