There’s no question that this building is an appendage to a historic museum, but its monolithic travertine finish gives Bez + Kock’s design a presence all of its own 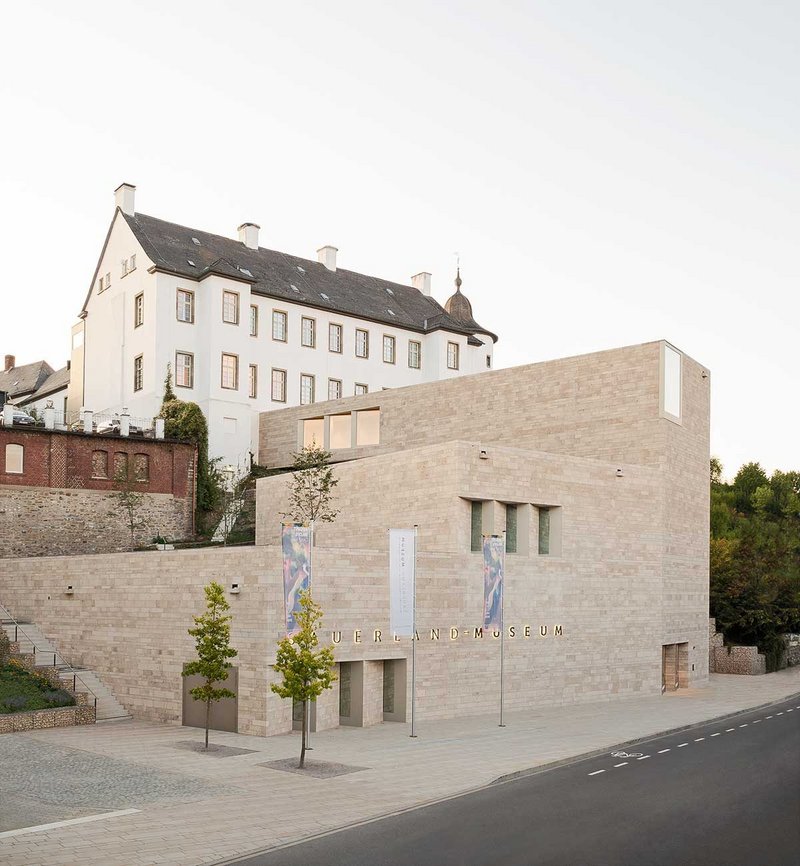 Sauerland museum’s monolithic, travertine-clad new building feels as much part of the landscape as it does an extension to the original. Credit: Brigida González

When geological complications scuppered the viability of Bez + Kock’s design to extend the Sauerland-Museum in Arnsberg, Germany, the architects had to start again. Judging from the completed building, what could have been a major blow turned out to be a blessing in disguise.

Resplendent in a 1,170 m² facade of textured travertine, the new addition is a positive civic presence, providing a elegant, poised form within the streetscape that deftly navigates the intersection between the historic and newer areas of the town.

It could all have been very different. In 2012 the museum, now known as the Museum and Cultural Forum South Westphalia, held a competition for an extension capable of staging large temporary exhibitions. These were impossible to house in the existing museum building, which dates back to 1605 and was not able to provide the necessary spatial or environmental conditions.

To enable it to expand, the museum, situated on a hill in the old town, acquired adjacent land to develop. However this site was down the hillside from the original building – presenting a drop of 19m between the ground floors of the old and new structures. Bez + Kock originally proposed to build the extension almost completely underground in order to preserve views to and from the heritage museum building, with the facade appearing as a stone-faced retaining wall within the streetscape. But the rising projected costs of the complex excavations required made the design financially unviable.

The architect decided to seize the ensuing redesign as an opportunity to confidently articulate the extension as a building, rather than conceal it within the hillside. The challenge was to do this without obscuring views of the original museum while also retaining the ‘English Promenade‘ historic public path that runs across the back of the site.

The revised extension remains subservient to the original with no main entrance of its own – visitors instead access it from the historic building via an attractive, 13m long elevated walkway. This ‘docks’ the new extension into the main museum at the latter’s first lower ground floor level rather than ground – any higher, and the extension would have ­obscured views of the main museum. This high level bridge also accommodates the Promenade, sailing over it. The new building contains 520m² of exhibition space including a main exhibition hall on the ground floor on Ruhrstrasse, and a multi-purpose hall at mezzanine level.

The three storey building appears monolithic, wrapped in a deep stone interrupted only by two trios of windows cut into the main elevation, their oblique form serving to emphasise the depth of the cladding. Another three are ­diagonally cut into the bridge link to frame splendid views towards the Brückenplatz square and River Ruhr, with a full-height window at the end of the link giving panoramic views of Arnsberg. A public terrace on the lower roof of the museum gives further views.

According to Bez + Kock project manager Meredith Atkinson, the architect was always keen to use natural stone, as something ‘massive and weighted’ which was seen as appropriate for the museum, and encouraged the idea of a building growing out of the hill. ‘We also wanted it to be light in colour and friendly,’ she adds.

Another factor was that the architects were keen to choose a relatively local stone: ‘We didn’t want to be shipping stone from India’.

The practice initially looked at using the same Grauwacke local stone that had been proposed for the original retaining wall design. But this was too dark and, with too much variation in colour, did not suit the new building form.

Instead, the decided on travertine from Gauinger in south Germany – a stone also used extensively at the Grimm Museum in Kassel, designed by Kada Wittfeld Architektur. Bez + Kock specified that it be rough sawn and then bush hammered on its facing surface to give a softly textured surface.

‘We were having an extensive amount of wall, so wanted to make sure there was enough texture so that it offered something to the eye,’ says Atkinson, adding that the colour had the required warmth and gentle amount of variation to avoid it looking too busy over such a large expanse of elevation.

When it came to the composition of the travertine cladding, it was ‘the horizontality that mattered,’ she says. The length of the stones was left random depending on what the quarry provided – a more economic option – and ranges from 20-70cm. These were configured in courses of three different heights – 12, 20 and 30cm – a range chosen to accommodate the various window and door openings on the elevation, and also to add variety.

The 9cm travertine blocks were laid ‘massive, like a brick’ with adjustable, stainless steel masonry support anchors – thermally separated from the wall – tying them back to the concrete frame roughly every 5m in height, and above all the door lintels and windows in the facade. The frame was cast in-situ with the exception of partially precast, waterproof concrete panels on the slope-facing back walls. The wall build-up between the frame and travertine also included 180mm mineral batting insulation with a 20mm cavity between the stones to accommodate the mason’s figures.

To further emphasise the horizontality, the travertine has a 10mm mortar joint horizontally, but only a minimal vertical joint, with the stones positioned hard up against each other. Expansion joints are sealed with tinted, sanded silicon.

Dealing with the window openings presented particular challenges due to both the different thermal coefficients of aluminium, stainless steel and stone and the different tolerances between how stonemasons and glaziers work, according to Atkinson.

‘We had fantastic contractors for both (Lauster for stone, Fuellbier for glazing) who were willing to work together for the best result.  The glaziers came up with the idea to build a guide out of wood on site for the stonemasons to follow.  The installation of the various components was carefully choreographed in terms of who went first, second, etc.  That was necessary because there was no chance for do-overs – the masonry and the aluminium cladding are permanent,’ she explains.

The stone clad walls have a thermal performance of 0.19 W/(m²K), with the glazed part of the facade performing at 1.30 W/(m²K). While the travertine certainly played its part in the thermal performance, the 250mm concrete frame and 180mm insulation were also significant, said Atkinson.

The redesign inevitably delayed the project, which completed last year some seven years after the initial competition for the extension, and included a refurbishment of the historic building. But, resplendent in its monolithic travertine cladding, it has surely been worth the wait – with the benefit of hindsight, the initial plan for a retaining wall could well have been a missed opportunity.

‘I think the success of the project was taking the new requirements and making the most of them. We thought ‘let’s use this opportunity to show this building’ rather than trying to hide it,’ says Atkinson.