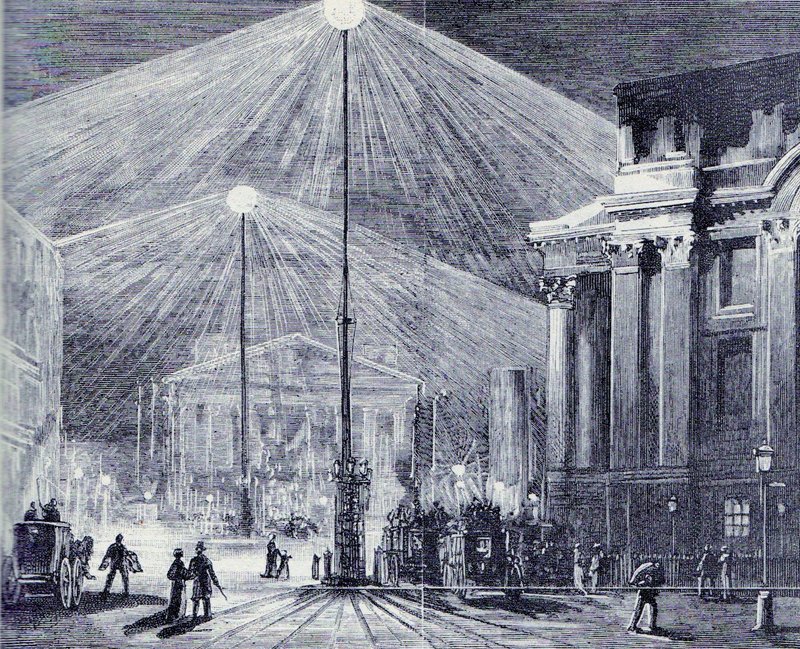 Siemens arc lights at Mansion House, 1881.
When the comedian Charlie Chaplain published his autobiography in 1964, many people thought that the appalling depiction of his childhood in late-Victorian and Edwardian London must be exaggerated. It wasn’t. The film star had been born to a music hall performing father who drank himself to death, after which the family fell into harshly bleak poverty, moving in and out of the workhouse. His mother was even sectioned. But Chaplin’s portrayal of London in these years, perhaps seen through the nostalgic lens of a staggeringly successful career in faraway Hollywood, was also lyrical and poignant: ‘This was the London of my childhood, of my moods and awakenings: memories of Lambeth in the spring; of trivial incidents and things; of riding with Mother on top of a horse-bus trying to touch passing lilac-trees – of the many coloured bus tickets, orange blue, pink and green, that bestrewed the pavement where the trams and buses stopped – of rubicund flower-girls at the corner of Westminster Bridge, making gay boutonnière, their adroit fingers manipulating tinsel and quivering fern… From such trivia I believe my soul was born.’
I thought of Chaplin a lot while reading London 1870-1914, a City at its Zenith – Andrew Saint’s pithy new social and architectural history of London during the years that the future film star was growing up there. The cover is decorated with one of Charles Booth’s poverty maps, published from 1889, which surveyed every street of the capital, colour-coding them from red or yellow for the homes of the well-to-do, to streaks of sinister black for the ‘vicious, semi criminal’. Booth was a Tory businessman, but even he became convinced that something more than church and charity was needed to deal with London’s poor.
One of the overarching narratives of the book is how growing social concern with poverty resulted in a veritable crusade of municipal and private initiatives. There is a moment in one of Conan Doyle’s novels where Sherlock Holmes and Dr Watson are looking from a train carriage window across the slate roofscape of London at the new Queen Anne board schools rising ‘like brick islands in a lead coloured sea’. Holmes proclaims that they are ‘Lighthouses! Beacons of the future! Capsules with hundreds of bright little seeds in each, out of which will spring the wiser, better England of the future.’ There were other capsules of a brighter future going up all over London, and Saint documents the new libraries, town halls, swimming baths, and council estates. For those accustomed to associating progressive politics with functional modernism, the architectural expression of these buildings might come as a surprise, with their picturesquely composed ornamental abundance of swags and putti, in pretty amalgamations of red brick, terracotta, and stone dressing.
Saint’s narrative is unashamedly celebratory of the period. As many of the processes he documents reached their culmination in the inter-war period, I am not convinced this was necessarily London ‘at its zenith’, as the book’s subtitle proclaims. Nevertheless, the book affably conveys the prodigious improvements for everyday Londoners in a city evolving multiple new ways of living. This upward trajectory goes beyond worthy advances for the poor. Saint is particularly strong on the burgeoning forms of having a good time, from the skating craze of the 1870s to the proliferation of pubs in the 1890s. The considerable social impacts of new technologies, from electricity to the motorcar, are also perceptively described. The book is particularly fascinating on many pioneering infrastructures of the period, including, inter alia, the department store, the polytechnic, street lighting, motorcars, or the fire station. Descriptions of buildings Saint loves, such as Westminster Cathedral or Selfridges, are infectious in their enthusiasm.
123

Saint covers an impressive amount of ground in this concise, copiously illustrated book. Explanations of complex historical processes are admirably succinct. The resulting depiction of London tends to be impressionistic, created out of a multitude of expressive details. The text is far more likely to quote contemporary novels than provide hard statistics or economic facts. Nevertheless, much of the writing is based on the penetrating research Saint did while general editor of the Survey of London, so even when he is making sweeping a generalisation, the  reader is confident it is bolstered by unrivalled knowledge of the particularities of the city and its buildings. This is a virtuoso urban history that I think Charlie Chaplin would have enjoyed. It tells the history of many of the places that formed him – not just the institutions that attempted to mitigate the worst of slum life, but also the music halls in which he learnt to perform, the pubs his father drank in, and the trams he rode. The London we leave in 1914, an industrial behemoth at the centre of a global empire, is obviously not the capital city of today, but it is part of Saint’s achievement to show the beginnings of many of the processes that continue to dictate the quality of urban life, for better and for worse.