A stimulating Architecture for All worked the Thames brilliantly, but missed the chance to really involve everyone

There was a big picture of London in Ellis Woodman's Architecture for All series on the Thames at Greenwich's Royal Naval College. Like a mirage, it called up an x-ray of the capital as vast building-site-cum-hotel, booming to service the semi-resident, speculative rich. The elusive comparisons with Venice, which hovered both in maps and images of our swampy mercantile territory and tales of booming economic realities, suggested both major threat – and potential, fragile opportunities for those of us residual audience residents, clinging to our home however we can.

And this was only the last of a (surely excellent) three-part series in which Woodman used the Thames to cut a strategic section through the city. Earlier talks had looked at building and living on the river, including the growth of Londoners living on boats (and even generating their own letting economy). Working the River, held just before Christmas, explored the working life of the river itself as a continuing history of London's constant redevelopments. 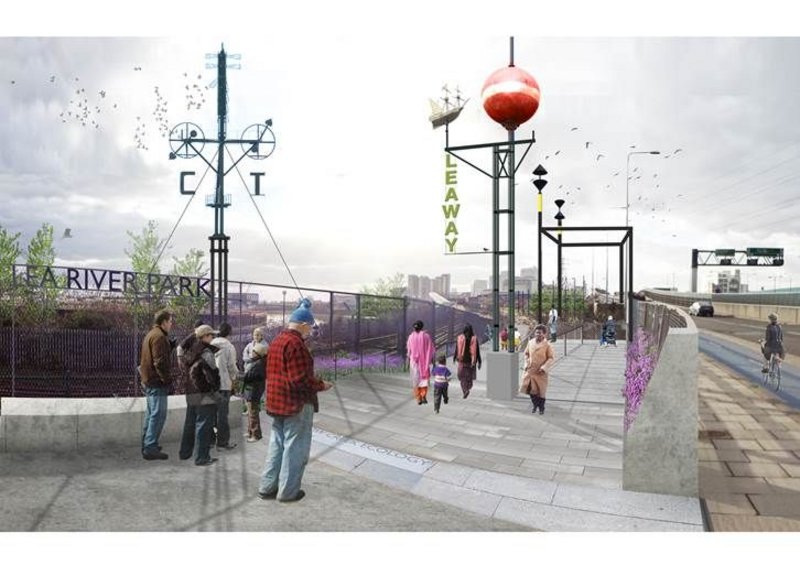 The Lower Lea Valley as conceived by 5th Studio.

The talk passed from archaeologist Mike Webber, exploring (and doing outreach from) the foreshore; Peter Guillery of the Survey of London, describing the heritage of Woolwich; Martin Garside of the Port of London Authority on the working river, to Tom Holbrook of 5th Studio, with its strategic proposals for the Lower Lea valley.

Cross-reading all this was utterly gripping.  You got a clear sense that architects, in the last 20-odd years, have seen Bazalgette (via Rogers, neither mentioned) as the one great model for riverside development – that single, long, serviced promenade, used for all occasions, and specially great for commercial development.  The obliterated historical models: stairs; wharves; piers; inlets – and their possible benefits: flooding overflow; a more varied economic landscape; actual access to boats – have been pretty well forgotten.

Not here. Those old river stairs turned up in almost all talks: Webber's crucial human access to the foreshore, Guillery's astonishing survivals of Woolwich's dockyard steps; and finally their reinvention in 5th Studio's ramped route through layers of fences (owned by different authorities) to give Lower Lea residents and workers access back to their landscape.

5th Studio's proactive proposal roughly embodied the collective intelligence of this series: the real problems and some lateral, strategic solutions. The public right of access to the tidal reach of the Thames foreshore itself, for example; or looking at how we can design our own city to benefit, however marginally, from such booming conditions.  The connections of ideas from different sources showed just how well this event was curated.

But… a big but. Those connections remained in the head, or in conversations in the semi-deserted bar.  Having overstacked their panel and overshot their mark, the protagonists carried themselves smartly off to supper, leaving the committed, troublesome, vastly well-informed audience fobbed off with some bottles of wine. C'mon, everyone.  Surely, that's not Architecture for All. This event was – and should have been – for a real public, which was heroically, committedly, on that last Friday night before Christmas, actually there.