Architecture in Antarctica is among the most cutting-edge built today, yet it is only a century since buildings were first constructed there. 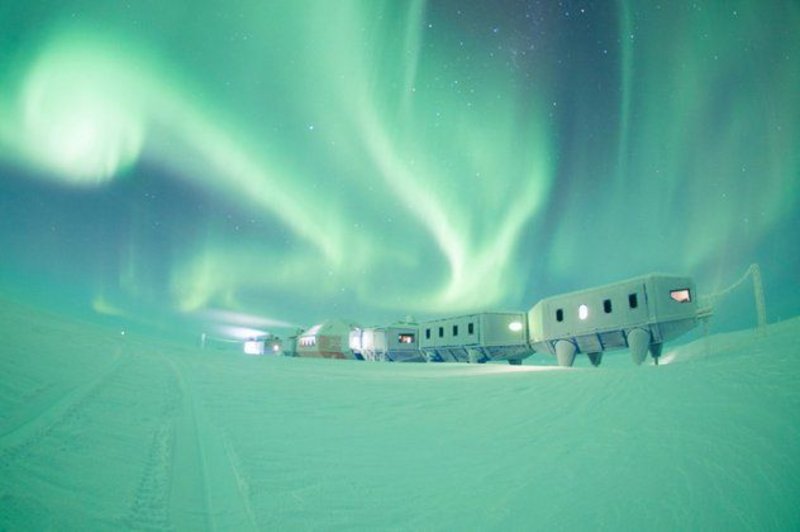 This fast learning curve, driven by extreme conditions more comparable with those found on other planets than elsewhere on earth, has resulted in some extraordinary designs including the British Antarctic Survey’s relocatable Halley VI to a proposal for a living station buried within an iceberg. These and others are celebrated in Ice Lab, a British Council touring exhibition opening this month in Manchester and curated by the Arts Catalyst.

Curator Sandra Ross was keen that the show, designed by We Made That, should convey the extreme difficulty of even reaching the Antarctica as well as its unique atmosphere, as well as the ingenuity of the design solutions. Artist Torsten Laushmann was commissioned to create two pieces for the show – the first, Ice Diamond, uses sounds and kalaidoscopic images to follow a ship making its way through ice to Antarctica.

“The sounds of the Icebreaker crashing into the ice is overwhelming. It’s a very poetic piece but also shows the massive determination required to conquer the logistical challenge of getting to Antarctica.” says Ross.

A haunting sound piece Whistlers creates eerie abstract noises derived from residues of sounds picked up by specialist equipment from elsewhere on the planet.

Five projects are featured in the show, along with references such as Archigram’s Walking City and details of the science undertaken. These buildings are truly a new genre of architecture, tackling extreme climatic conditions of not just cold but wind and dryness, and yielding impressively sustainable solutions. Function is king and every component has to work hard – often with several different uses – to justify the effort required to get it there.

The Polar Foundation’s Princess Elisabeth Antarctic utilises wind and solar power is the first zero-emission station in the polar region and needs no interior heating. The award-winning Halley VI, designed by Hugh Broughton Architects and engineered by AECOM, withstands freezing winter temperatures of minus 55ºC and is designed to impact minimally on the environment.

India’s Bharati Research Station designed by bof Architekten/IMS, is made from 134 prefabricated shipping containers wrapped in an aluminium case. Two further designs are not yet built. One, Jang Bogo Korea is due to open next year and will be one of the largest year-round bases, accommodating up to 60 personnel. Another, speculative, design is one of the most intriguing. MAP Architects of Denmark’s Iceberg Living Station suggests creating a research station within an iceberg, thus avoiding the need to bring building materials to the site.

The exhibition is expected to tour internationally after its Manchester showing.