How well do you know London – its past, its views, its details? Wander through time and everyday events at Guildhall Art Gallery 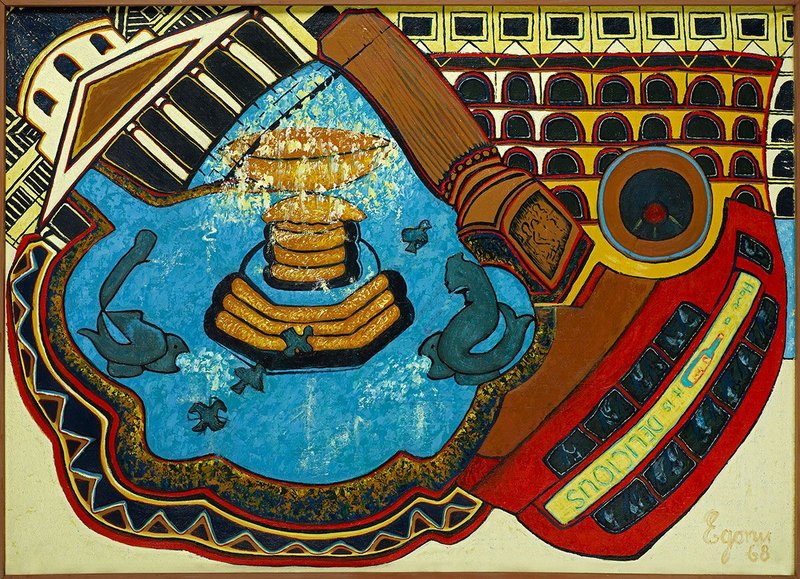 Trafalgar Square by Uzo Egonou, 1968. Credit: ©The estate of the artist

Standing in Greenwich Park and looking north over the river, the view of the massed towers of Docklands is startling. It’s something of a surprise, at the new Architecture of London exhibition, to see a 1678 painting by Jan Vorsteman of the view from Greenwich to the centre of London and realise that this vision of churches, towers and monuments, portrayed on a somewhat heightened scale in contrast to the otherwise low-rise city, must have seemed every bit as shocking to viewers at the time as the high rise redevelopment of Docklands does today.

One of the delights of this exhibition at the Guildhall Gallery is to time travel back to parts of the capital and see them anew in the full knowledge of what they have become today. Works by more than 60 artists, including Canaletto, Lucian Freud, Rachel Whiteread and Frank Auerbach, have been chosen from the Corporation of London’s own collection, supplemented by loans to reflect on the way the capital’s architecture has been depicted in art. Spanning 400 years to the present day, the City of London exhibition ranges from dramatic city panoramas to architectural details, from well-known landmarks to everyday streetscapes, from construction to destruction.

We see the South Bank before the National Theatre, the bomb-devastated ward of Cripplegate before the construction of the Barbican, and in Niels Møller Lund’s 1904 The Heart of Empire, a view of the city in its heyday before the decline of the empire and the Blitz.

Perhaps it’s not surprising that many artists chose to depict the Thames, conveying the river’s busy role as a commercial thoroughfare with myriad small boats and shore activities. The construction of London’s second bridge at Westminster was evidently a popular subject, judging by its presence in a cluster of paintings of that time. For compositional drama, Canaletto’s 1747 painting wins by a mile, looking through one of the arches down the river to St Paul’s and the City of London and painted during the bridge’s long construction. A couple of centuries later, Charles Ernest Cundall’s 1935 Demolition of Waterloo Bridge is a fascinating portrayal of the bridge’s demise, with workers swarming all over it as it is dismantled. Bringing us up to date, the exhibition also features (until 1 September) the Illuminated River project to light up London’s bridges, by artist Leo Villareal.

The section on construction and destruction is particularly compelling, whether depicting terrible fires such as the Great Fire of London or World War II bombing. Work by war artists including John Piper and Graham Sutherland capture scenes of damaged buildings such as Christ Church at Newgate. But for a vivid depiction of the immediate aftermath of a bombing, James Wallace’s Bombed Ruins near St Paul’s is most striking. In this, great plumes of water are sent into the rubble to quell the fire, which glows at the centre of the night time scene. For years, even decades, bomb sites remained visible and un-redeveloped in the city and continued to capture the imagination of artists.

While some of the city vistas are fascinating tour-de-forces of representation, it’s impossible not to be drawn to more emotive, impressionistic work such as Nigerian artist Uzo Egonu’s vivid portrayals of London landmarks. His Trafalgar Square, an energetic melee of National Gallery, Nelson’s Column, fountains and a London bus, are a vivid counterpoint to Ben Johnson’s meticulously precise Looking Back to Richmond House of a similar location. Others focus on the relatively mundane, whether Julian Perry’s views of Hackney Marshes and blocks of flats or Bryan Ingham’s bleak 1959 Landscape at Peckham, which depicts a terrace of soon-to-be demolished houses. Some are captivated by everyday architectural details such as Jonathan Pike’s evocative 1983 painting of rooftops, which fills the canvas with roofs, chimneys, slate and brick. Lucien Freud’s 1970-72 Wasteland with House, Paddington, depicts an unlovely pile-up of rubbish viewed from his window.

Some of the most powerful pieces are the more recent. Catherine Yass’s Last Stand is a film of a figure standing silent and still on top of a concrete core surveying the regeneration of Nine Elms – as the camera pans around we see the American Embassy in the background. It is, we learn, a ‘last stand against the privatisation of the sky’. Four photos by Rachel Whiteread’s document the demolition of high rise towers in Hackney, something that was mourned by some locals and celebrated by others. There is a beauty in David Hepher’s depiction of Albany flats 1977-1979, part of the Aylesbury estate now undergoing redevelopment in Southwark. He fills the painting with a frontal view of a building façade, in doing so drawing attention to both the large scale of the block and the myriad variations in the curtains and windows within the fine grain of the individual flats.

This highly enjoyable exhibition is part of the City of London’s Fantastic Feats: The building of London programme of events celebrating architecture, invention and engineering.