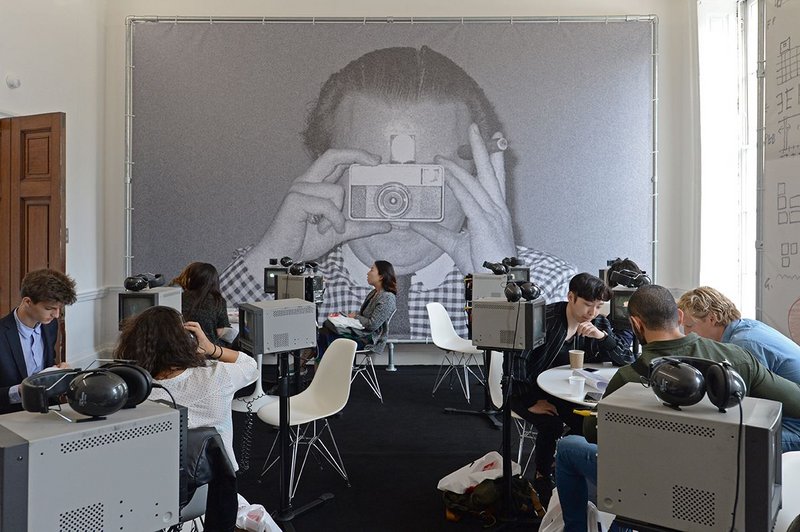 Many years ago in pursuit of a quirky architectural news story, I rang Cedric Price to ask him about a take-away cup he’d designed for the Crowbar café in London. Shamefully, I then knew little of the man or the work, but he treated my rather frivolous questions with more seriousness and consideration than they probably deserved.  I rather regret that this was my only interaction with him, especially after listening to the rich reminiscences of others in the Memory Bank installation at the Architectural Association.

Staged to coincide with the publication of the new book Cedric Price Works 1952-2003: A Forward-minded Retrospective by Samantha Hardingham, this installation is deceptively engrossing despite the rather spartan presentation. It consists of a dozen or so small monitors and headphones, each screening an interview with a friend or collaborator of Price. A couple of large-scale images of Price and a few drawings adorn the walls.

Listening to this installation isn’t something that can rushed. It rewards with a fascinating insight into the personality and work of Price and what he meant to those close to him. And although references to key visionary projects such as the Fun Palace, the Potteries Thinkbelt, and Magnet pepper the reminiscences, the interviewees are full of great anecdotes about everything from Price’s legendary alcohol-fuelled breakfast meetings to his retreat – a phone-free white room at the top of his office known as East Grinstead where Price went to escape distraction.

Samantha Hardingham’s recollections are particularly illuminating. She describes him as a ‘crescendo of paradoxes’ who was ebullient, fun and spontaneous but at the same time deceptively organised, with a strictly compartmentalised way of organising his day and activities. She discusses his fascination with people, and his interest in architecture being human-centric rather than form-centric. It was particularly important to him that architecture could delight and uplift and, above all, act as an enabler.

On the question of whether Price would have wanted to build more than he did she is sure that he would, and that there were always very good reasons why so many projects failed to be realised. Others offer different views. Will Alsop, who once worked for Price, thought that he didn’t really want to build, recalling his distinct lack of interest in questions of detail and building regulations.

‘He wasn’t afraid of building. He was just not very interested in building. What he was interested in were the ideas behind a building,’ says Paul Finch, who knew Price for several decades and warmly describes their regular meetings.

Price was, he says, a curiosity who was difficult to categorise. While he influenced and still influences architects, he was never part of a particular gang. Instead, he was a ‘cultivated maverick’.

Serpentine Galleries artistic director Hans Ulrich Obrist remembers how meetings with Price were like ‘going on a walk with him through his ideas’. And what ideas they were – he was particularly taken with a concept for giant umbrellas that pop up out of drains to cover the street when it rains.

‘The last thing he’d want is that we worship him,’ says Architectural Association director Brett Steele, who talks of Price’s 50 year ‘hidden career’ of architectural discovery. Though fond, this installation doesn’t do that. But it certainly whets the appetite to learn more about Price’s thinking and projects, and thankfully Hardingham’s new book can help with just that, providing a retrospective of a half-century of Price’s provocative and thoughtful works.

Memory Bank by Jan Nauta and Victor Vroegindeweij, until 29 October, Front Members’ Room, 36 Bedford Square, London; coinciding with the publication of Cedric Price Works 1952-2003: A Forward-minded Retrospective by Samantha Hardingham (co-published by the Architectural Association and the Canadian Centre for Architecture) Architectural Association. Available at ribabookshops.com