A tightly-knit creative gathering, Assemble is a practice that’s definitely not put together in the conventional way 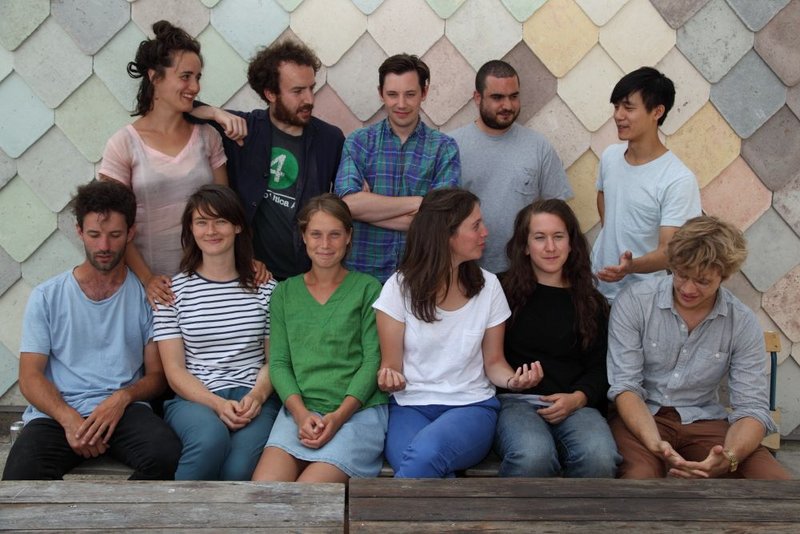 Very early in the conversation, Assemble says: ‘we never meant to start a practice’. In an age when many architects’ currency is the rhetoric of the grandiose and self-serving big slogan, it’s a relief to find a practice so loose and relaxed with itself. For an group purporting to have fallen into it, they’re unusually inventive with reimagining practice.

Graphic designer Alan Fletcher of Pentagram once said that the vehicle of practice – the organisation itself – was at least as important as any of his projects; this is certainly true of Assemble.

Curiously though, while in the 1960s reinventing working method was the norm, now every architect and his dog seems to want to chain themselves to a corporate office, rigid hierarchies and unthinking practice.

They ‘make’ because it is fun, relishing the give and take of working as a team and the negotiations needed to construct a building

Things are different at Assemble’s Sugarhouse Studios: they work out of a ramshackle light industrial building that is awaiting demolition, just off Stratford High Street. They secured the building in the interim on a peppercorn rent; it is complete with large multi-purpose spaces, tools and site gear, a welding workshop and a pink table tennis ­table. It is full of discombobulated bits of previous temporary projects, a kitchen where they take it in turns to cook lunch every day and, critically, a yard used for gatherings, full-scale fabrication or just hanging out.

Assemble acknowledges the ‘yard’ as an important part of the cultural history of this area of London – they talk of how the shared artisan yard is the essential component, rather than buildings. They also acknowledge the import of their place of work, and its sheer abundant space and the freedom it gives them to operate in a different way. Stonemasons, artists and carpenters also work in this building and the new adjacent Yardhouse Studios. Assemble’s Lewis Jones says: ‘We couldn’t do this from a little office in Clerkenwell.’ 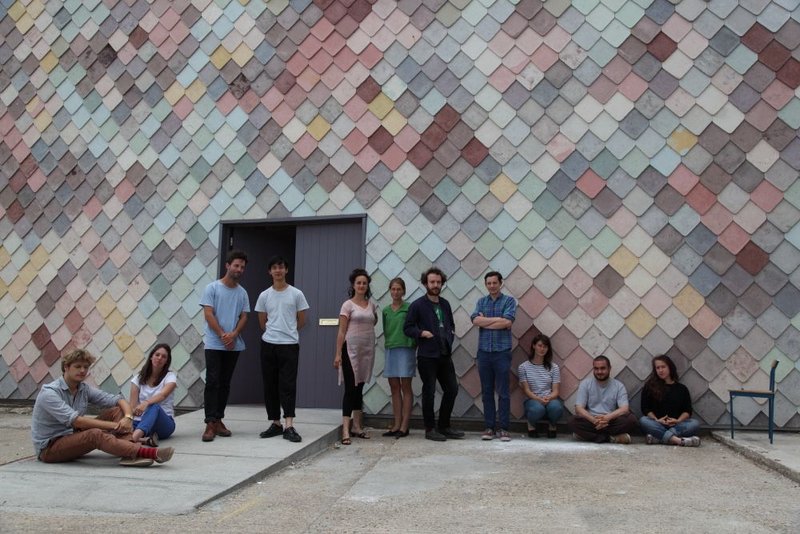 Assemble at its self-built Yardhouse in Hackney Wick, complete with coloured concrete shingles made on site.

The group is fascinated by the act and process of making – they have built many of their own projects including Folly for a Flyover and the Yardhouse Studios, but not in a pious Arts and Crafts way of obsessing over technique and detail – they ‘make’ because it is fun. Nor do they fuss about the material control and autonomy it gives them; instead relishing the give and take of working as a team and the negotiations needed to construct a building. This is another aspect of their can-do mentality.

More important, perhaps, is their focus on people and place, and how buildings and the process of delivery can act as catalysts for change. I mention Jeremy Till’s description of the consequence of buildings being more important than the buildings themselves, and Maria Lisogorskaya agrees – ‘absolutely – otherwise you’re limited to talking about what shape or colour a building is – and that gets pretty boring’.

Unlike many of their contemporaries who grab at every opportunity of appointment, regardless of the politics behind it or wider agenda beyond formal design, Assemble has little interest in private commissions unless bigger issues can be explored.

Formal beauty is only a tiny part of the picture. Creating a building that exists only as an object would never be enough for them

They grew out of the recession and widespread disgruntlement when many architects were bemoaning the profession’s ­increasing marginalisation. But while others did little to get work, Assemble generates its own – finding sites, raising funding, and, of course, building the project itself. This is all part of opening up the dialogue of architecture, and a leap away from a culture where architects are becoming outmoded, limited to styling objects. Assemble is entrepreneurial in the best sense, in that the group started a business to create the environment in which to operate – rather than merely being available for work on other people's terms.

The practice is a group of friends who studied together at Cambridge; not all did architecture, which Lewis hails as a relief. He says of the non-architects: ‘They can be so much more astute and direct than the rest of us who are loaded with the language of ­obfuscation and meaning with which architectural education indoctrinates you.’

Its first project was the ‘Cineroleum’ – a self-initiated scheme that transformed a derelict petrol station in Clerkenwell into a temporary cinema, demonstrating the potential to re-use the 4,000 empty petrol stations in the UK as new spaces for public use.

At the time, the Cineroleum was not even credited to Assemble – it didn’t exist then. The practice now describes it as a project that grew from some casual conversations about what the friends could do during the summer of 2010. The project was conceived and constructed in an impromptu way. It captured a zeitgeist about working quickly and instinctively and making the most of what you have. Importantly, it also successfully bypassed the conventional po-faced architectural rhetoric that litters contemporary discourse.

The same is true with its next project – the Folly for a Flyover, also temporary – which appropriated a disused motorway undercroft in Hackney Wick for a new public space. Built by Assemble with 200 volunteers, for nine weeks that summer the space was a venue that attracted over 40,000 visitors. When the project was disassembled, the London Legacy Development Corporation invested in allowing the site to continue as a public space because of the Folly’s success.

More recently, it built the nearby Yard­house project for £85,000 – £285 per m2 – with match funding from LLDC. Yardhouse grew out of the practice’s desire to provide the cheapest possible creative workspace – which is, by and large, the most important ingredient in allowing creative industries and artists to flourish. Lewis calls the project a simple ‘decorated shed’, and Assemble is delightfully unprecious about the fit-out which is left up to the tenants. Joe Halligan clearly takes pleasure in the way that the architecture has encouraged user occupation, saying gleefully: ‘It’s a bit shantytown now, but that’s how we like it’.

Music to my ears, as one who abhors the obsessive control most architects continue to have over how their buildings are occupied.

The relaxed way members talk about their work belies the fact that each project is perfectly realised, exquisitely beautiful and clever. Unlike much collaborative design, all Assemble’s projects are pert, playful, singular and inventive. But they are savvy enough to realise that formal beauty is only a tiny part of the picture. Creating a building that exists only as an object would never be enough for them. And they don’t moralise either – they are too busy getting on with what they do.

A big change, potentially, and a hint at a different direction is the recent win (through competition) for a new £1.8m gallery at Goldsmiths. The group seems remarkably unfazed by the leap in scale. Nor does it see the conventional procurement route as a hindrance, assuming it will still use its own yard for full-scale investigative fabrication. Even though the competition was won on the basis of a developed scheme, they talk about how Goldsmiths was hungry for a different way of doing things, and how it supports the practice’s ethos. Assemble also seems excited about a move away from the pop-up, and doesn’t want to become typecast by early projects.

The close-knit group of 12 plus part timers is pretty fixed. There are no interns or Part 1s; they can’t imagine taking on anyone who wasn’t one of the originals.

Their ambition is not to be defined by an aspiration towards growth – a relief in a climate where architect’s practices are often defined by size. They want to work in a way that is interesting and socially and culturally relevant, not world domination. I ask about the future and Joe says: ‘What if we didn’t grow, but stayed 12?’

Assemble has swiftly and skilfully formed a model for restating the relevance of architects. The last 20 years have been dominated by the globe-trotting starchitect as the aspirational role model for practitioners, and even those who started out as freer collectives are now rigid and corporate, often with multiple offices. The recession is usually the reason they give for having to straitjacket themselves into becoming flunkeys for straight-laced clients. Assemble on the other hand is showing that recession is not a reason to abandon an idealistic modus operandi, but an opportunity to develop it. Many practices start off as principled and experimental, but few stay like it. Assemble, however, just might.