Many of Brussel’s prolific examples of the style have been lost, altered or neglected, but the annual Banad Festival celebrates the survivors – and you’ll need to book to see them warns Isabelle Priest 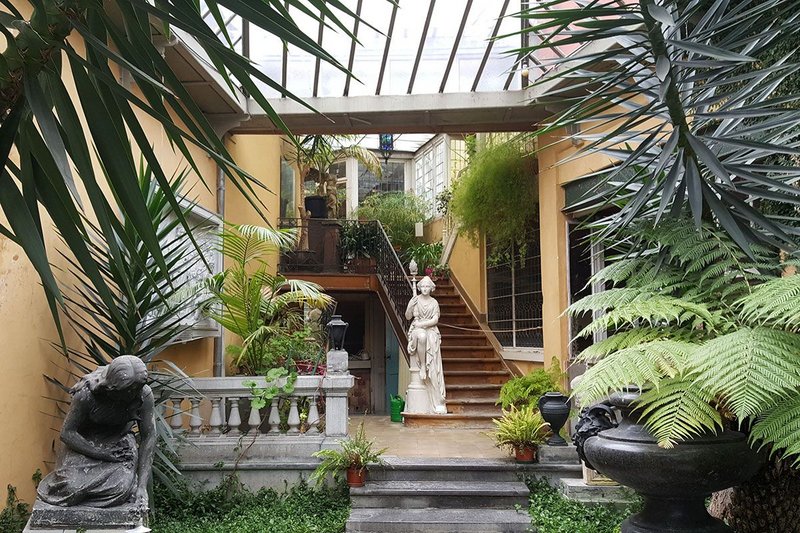 The studio of sculptor Ernest Salu located next to the Parvis Notre Dame. Credit: Isabelle Priest

As a city, Brussels is known for its art nouveau architecture. As the home of architect Victor Horta, who designed the first building in the style, Hôtel Tassel, the city is credited with inventing it.

At the time, a brief period falling roughly between 1880 and 1910, the Belgian economy was booming. Money was flowing in from the coal, iron, textile and chemical industries as well as from the Belgian colonies after rapid and dense industrialisation in the first half of the 19th century that closely followed Britain’s. The country was young and modernising. An early train network connected the resource-rich eastern and southern regions with the port city of Antwerp, allowing it to export its products all over the world. Although versions of art nouveau took hold in other countries too, including Austria and France, Belgium’s adoption of it was prolific. Its cities were expanding at pace and the newly wealthy were commissioning houses and workplaces for themselves and their staff in the developing suburbs.

Countless buildings have been constructed in the style, which took the arts and crafts idea of a closer union between the fine and decorative arts. You’ll find examples of art nouveau in any Belgian town, but nowhere more than Brussels, where its suburbs including Ixelles are a treasure trove of individually designed and unique manifestations, one after the other. You will see the name of the architect responsible engraved, in a way still prevalent on the Continent today, into the stone or granite by the front door. You can wander around compiling a mental map and analysis of each architect’s work in your head.

Each building is a carefully constructed ‘total work of art’ that implemented the design approach from the wall and floors to the furniture, light fittings, ceramics and textiles as a reaction against the mass manufactured manmade goods and building materials that had begun to flood into middle class homes as part of the process of an industrialising nation. Art nouveau designers wanted to create something that, unlike the prevalent styles of the decades before, was original, not revival. They used iron, a material associated with industrial buildings, and brick to create designs and compositions influenced, conversely, by the natural world as well as oriental and decorative styles. The designs encouraged a return to handcraftsmanship and traditional techniques, against the tide of fast industrialisation and mechanisation of Belgium’s workforce. Two strands of the same thinking developed, the curve art nouveau and geometric.

However, as in Britain, the mid-20th century did not look kindly on these late Victorian buildings, despite their obvious integrity, thoroughness and charm. During the 1950s and 1960s, more than half of all surviving art nouveau buildings in Brussels were demolished by uncontrolled, unscrupulous development to make way for new city blocks and towers; a type of development that became known as Brusselisation. The houses that weren’t destroyed were heavily altered and adapted by their owners as they had become so demoded.

Nevertheless, in the past few years Belgium has woken up to its rather extraordinary repository of art nouveau buildings. Many are listed (though many still aren’t) and there is a growing trend among the very wealthy to buy and restore them to their original plans and designs – a process that is likely to cost far more, relatively, than their initial construction. The owner of Hôtel Max Hallet has acquired multiple other examples, like an art collection.

On the public scene too, Belgium is starting to celebrate art nouveau again, against a contemporary backdrop that has been intensely focused on the severe and austere for the best part of 100 years. One means is the Banad Festival, a three-week long event held in March for the past three years. Private masterpieces – homes, schools, offices and more – are opened to the public for tours in the movement’s epicentre, Brussels. You need to book for slots and different buildings are open on each weekend.

This year’s event took place from the 16 to 31 March. Over the three weekends, 40 buildings opened their doors. Whizzing between the two main areas of the city developed during the period, and therefore containing the most sites, it’s possible to squeeze in three to four visits per day. The tours last between 25 and 45 minutes and are carried out in English, French and Dutch. The most famous all-encompassing art nouveau examples like the Max Hallet house (1904) are on offer, as well as lesser known houses where the style was only adopted partially.

Maison Boelpaepe and Maison Vanderveken are examples of these transitional style houses. Located within a few minutes’ walk of each other in the far western suburb of Sin-Agatha-Berchem, at the time the houses were built the area would have been a separate village in the Brussels countryside. For the Boelpaepe family, whose descendants still own the house, art nouveau merges with art deco. Maison Vanderveken, however, is more curious. A detached house set back from the road on a large plot with heavily overhanging eaves, from the outside it appears as a neo-regionalist building. Here, art nouveau is contained in interior details; brightly coloured stained glass pictorial scenes (currently being restored), tiled murals in the porch and hallway, door handles, fireplaces, floor tiles and cornicing. The house has been restored after suffering years of neglect.

Maison Blérot, on the other hand, is a fascinating example of a private house whose owner is reinterpreting art nouveau today. The building is not listed because many of its original features had been lost over time. Instead the owner has been commissioning contemporary craftsmen and architects to recreate, very effectively, an appropriate interior filled with cast iron railings, columns and fittings. At the studio of Ernest Salu, a sculptor who specialised in funerary art for the neighbouring Laeken Cemetery, you can see the motifs that were inspirational to the movement as a whole – irises, poppies – as well as all the mouldings, types of stone and different workshops. The building is much more informal and experimental than, say, the experience of Hotel Tassel, designed by Horta, which overwhelms in its grandeur although many of the components are the same; ironwork, atria that are neither fully inside nor fully outside but somewhere in between.

In all, only time will limit you during the Banad Festival. There is so much worth visiting – a fascinating peek into a private period more than a century ago. It’ll make you see Brussels and its built heritage, as well as Belgium’s cultural backdrop, in a completely different frame, and give you a deeper understanding of art nouveau. But start planning now for 2020 – slots book up very quickly.