If you know the remarkable preserved domestic interior of art collector Jim Ede’s house and gallery Kettle’s Yard in Cambridge, with its masterly (if externally mute) 1970 Leslie Martin extension, then you will know why Scottish-based concrete poet Ian Hamilton Finlay had a bit of a problem with it, and it with him. Ede was your classic good-taste music-recital soft-modern Cambridge aesthete,  if much more interesting than that implies. He was an inveterate arranger of pebbles, satirised by Finlay in a 1995 aphorism, incised inevitably on a pebble. It reads:  ‘KETTLE’S YARD CAMBRIDGE ENGLAND IS THE LOUVRE OF THE PEBBLE’. It is of course in this exhibition.

Ede and Finlay never fell out, it’s just that Ede didn’t really understand Finlay’s art, or the idea of concrete poetry at all. If you’re used to the naïve fishing-boat paintings of Alfred Wallis, say, or the abstraction of Ben Nicolson, then the idea of an arrangement of words and letters – let alone puzzling slogans – somehow becoming art must have seemed strange, especially in the mid 1960s when Ede first encountered Finlay.

Ede seems to have gamely attempted to get to grips with Sixties art experimentation, but by then he was 70. He knew what he liked and it was understandably enough mostly pre-war to the 1950s. Nor, as a modernist, did he have much sympathy with Finlay’s growing espousal of neoclassicism. Once, however,  he bought one of Finlay’s inscribed bowls. Obviously the whole point of such work is that you can see the inscription.  Ede filled the bowl with his pebbles, so negating it.  Then he wrote to Finlay to tell him so. It was this challenge that eventually led to Finlay’s inscribed pebble-Louvre jibe.

You might think, then, that Kettle’s Yard – now owned by Cambridge University, with its later temporary exhibitions gallery and plans for further extension by Jamie Fobert – is a strange milieu for an exhibition on Ian Hamilton Finlay, who died in 2005. But not at all, since there was a third, younger, individual, a friend of both men, whose personal collection forms the basis of this show: Cambridge art historian Professor Stephen Bann.  Just as Ede had collected artists he knew, so Bann acquired over time significant small-scale works by Finlay, mostly on paper.

‘As you know,’ Finlay wrote to Bann, ‘I am very fond of Jim, and don’t in the least mind that he doesn’t like my works. But you must not be disappointed  and you will remember, won’t you, that he has that particular firmness which is developed by vegetarians through Years of saying no, firmly, to meat-eating Hostesses.’ Now Kettle’s Yard has said Yes, and the domestic scale of its galleries are perfect for work of this kind.

Finlay is these days best known for his sculptural output – the concrete poetry expressed in actual concrete, if you will – especially as arranged in and around his house in the Pentland Hills near Edinburgh, which he named Little Sparta in sly opposition to the ‘Athens’ of Edinburgh. Here is where his often militaristic imagery – aircraft carriers, tanks, nuclear submarines – meets his utterly individualistic take on the French Revolution.  He takes the slogans and aphorisms of the Revolution and, more often than not, renders them absurd by re-imagining them. ‘Too much chatter sprains the soul’ is my favourite, one of his ‘Imaginary Speeches of Saint-Just’.

Sometimes just the visual joke is enough. A famous work at Little Sparta, shown in an early 1970s film here, is a tombstone-like inscription that reads ‘Bring Back the Birch’. The piece is overhung by a birch tree. The idea of humour in art was nothing new – Finlay always tipped his hat to the Dadaists – but his sloganising and monument-making started a movement of its own which continues in a lively fashion today. First-rank contemporary artists such as Nathan Coley owe much to him.

This is a modest, gentle, rewarding show, enlivened by Finlay’s loquacious letters to Bann that reveal his thought processes. For me his whole approach is summed up in one work – a Cambridge-blue scarf. Embroidered in one corner is a classic minimal Finlay word-piece, forming a perfect square:

Beauty and Revolution: the poetry and art of Ian Hamilton Finlay. Kettle’s Yard, Cambridge, until 1 March 2015 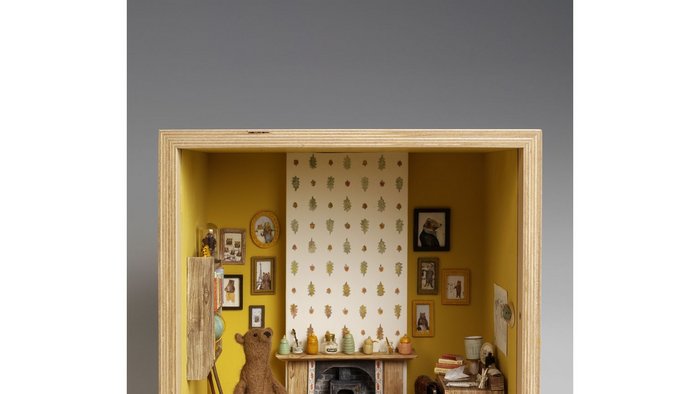 Rally of the dolls 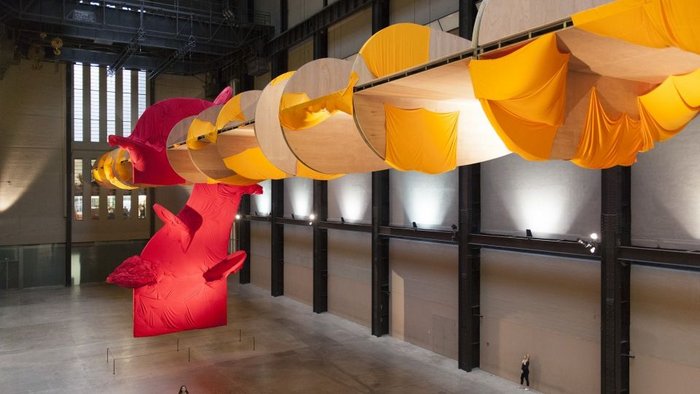 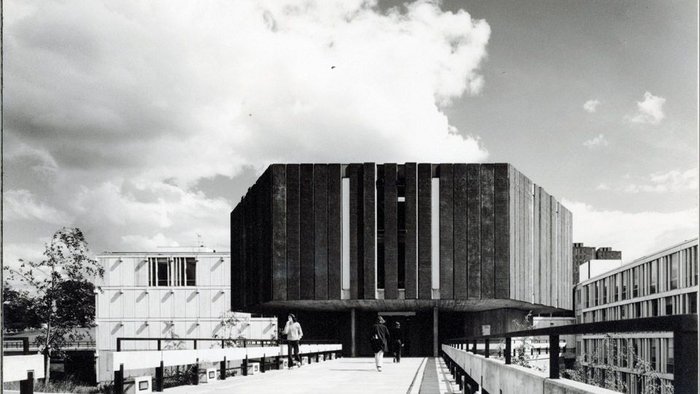