Bevk Perović Arhitekti's Islamic Religious and Cultural Centre centres around the mosque, but opens physically to Ljubljana to act as a social generator for the area, says Andrej Strehovec

The idea for an Islamic centre in Slovenia had been brewing for almost half a century before it came to life in early 2020. The Islamic Religious and Cultural Centre (IRCC) has been designed by acclaimed Ljubljana-based practice Bevk Perović Arhitekti and is an extraordinary architectural accomplishment, not only in local context but also, to an extent, in the global architectural and even social milieus. 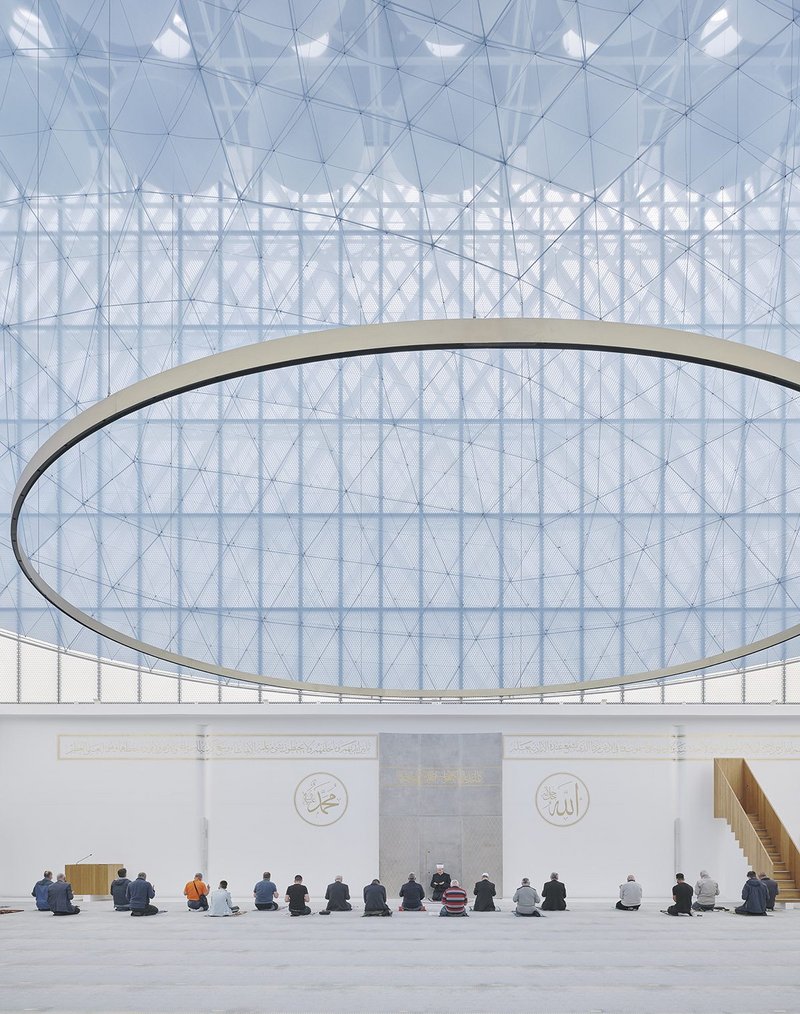 Under the textile dome in the mosque. The dome has a diameter of 19.3m. Credit: David Schreyer

One of the fundamental problems facing the project was finding an appropriate location within the modern Mittel Europaische Ljubljana. Co-architect Matija Bevk explained that the practice had not been part of the process of selecting the building’s location; that story began almost 40 years before the public tender was awarded in 2011. The project only progressed when Ljubljana’s Islamic community contacted the mayor and municipality and they decided to find a site together. The eventual idea was to use the project to revitalise a rundown area near the railway station, close to the city centre and next to the industrial zone.

One crucial thing for the architect was that it had the opportunity to design the entire area since the plot was not strictly defined by city planning and conservation parameters. (Ljubljana was an important city in the middle of a trade route between the northern Adriatic Sea and Danube region and it retains its historical buildings and street layouts.) Bevk Perović Arhitekti’s winning design was able to respond to the site as if it were a tabula rasa, referencing the railway and nearby industrial objects. The only limitation was the height of the minaret; everything else was intended to open up the area to its surroundings, which had been a key component of the brief from the client, the Islamic Community in the Republic of Slovenia.

The architect focused its attention on what the complex could offer visitors regarding two phenomena. The first included the observation of similar European and global Islamic centres, which had a tendency to be seen as introverted. In contrast, the investors wanted an open programme that connected with the city. The second phenomenon was the specific architecture of mosques and the example in Sarajevo where the whole arrangement of the mosque is physically more open and thus becomes a sort of social generator within the area. These intentions reveal themselves in the composition of the site as a scattering of displaced separate volumes. These buildings, with the mosque as the gravitational centre, create an open space around a slightly elevated courtyard that will, over time, fuse with the city.

Around this courtyard is the mosque itself plus the religious school and library building, a cultural hub and office and a residential building for community employees. The central 32m x 32m x 24m ‘mosque box’ is connected via a hall to a narrow service facility used for the washing ritual. The ground floor is traditionally reserved for men, while the space for women is on the gallery above. The other buildings also follow the same angular geometry of the courtyard platform and there is a triangular terraced park with a water feature and garden beds that progressively descend, according to the levelling of the plot. A relaxing view over this park can be admired from the restaurant next to the park and below the courtyard platform. A gym and parking are below ground level.

According to the architect, the openness of the centre, its extroversion and transparency were extensively discussed with the client, the community leader and Mufti, the highest religious representative of the country's Islamic community. This transparency was also desired by the Slovenian Islamic community, which wanted to achieve a kind of public recognition and a point of identification. The white concrete facades were selected to contrast with the surroundings, elevating it as a significant building – the whiteness is also both a principle of Islamic architecture and a feature of contemporary architecture.

The primary material applied in the finishing is the monolithic steel grille facade, welded together on-site, which results in a purist appearance. This construction grille was the most demanding part of the detailing to draw up because it is displaced to the outer layer, thus making glass the second layer. The architect also used special white concrete, terrazzo, wood, glass, and even textiles, working with what was locally available. Bevk is proud that they were able to build this kind of typically tradition-oriented building without resorting to stone.

It is Bevk Perović’s principle not to avoid the use of massive construction. The grille also carries the roof, so it is an ‘upside-down basket’ which lets the light flood the interior. Inside the mosque, the cupola is suspended from the ceiling, using a specially refined construction, which is covered in translucent blue textile and also carries a thin circular light within, creating a grandiose chandelier-like composition. The textile, a material that has a long and rich history in Islam, is an allegory of the blue sky, of the fragility of our world, but also a reference to the Istanbul Blue Mosque and even to contemporary art. ‘We are interested in the relationship between the compact and the fragile,’ explains Bevk.

The idea to put the cupola inside the construction box emerged somewhere in the middle of the tender process. So then the cupola became a creator of the inside space, a part of the interior design, a hidden symbol. This way the cupola also functions as an element of surprise. The same goes for the minaret tower, which is set deliberately as a separate object next to the building complex. Bevk didn’t want to just put the minaret on the top of the ‘mosque box’ as decoration – instead it is possible to get close to it and experience its full height.

On the mosque’s roof, there is a pixeled grid of skylight shafts which are shaded on the inside via miniature hemispherical insertions. This circular macro-texturisation is also present in the exterior paving. The architecture of objects surrounding the mosque reflects its façade features via rhomboid grid-shadings, wooden window framing, and sometimes by wooden facades and fine white concrete facade surfaces. Subtle inscriptions and minimalistic symbolic materials made of thin gold-plated metals are mounted on both the exterior and interior walls.

Discussing a broader professional picture, Bevk believes it is difficult to accomplish good architecture in our era, especially because of the large range of factors that must be taken into account. The architects faced the challenge of constantly changing and ever-stricter rules for detailing or other technical conditions. Challenged about Le Corbusier’s dilemma over being an atheist designing sacral objects, Bevk replies that it might be somewhat an illusionary question since if one wants to accomplish any architectural task one must know how to read the functions and also the emotions that go alongside. ‘Being only a religious person is not enough to be able to design sacral architecture,’ he says. ‘The ability lies elsewhere – in the imagination of the architect regarding the use of the building.’

Rather Bevk’s epilogue was about the nine-year-long process of designing and building the centre and the difficulty of keeping a common thread in those circumstances. He hopes time will reveal that the practice has managed to realise a project that is coherent and also a kind of encouragement to the Islamic community, as well as a contribution to Ljubljana and Slovenian society in a cultural, sociological, psychological and political sense.

Bevk Perović Arhitekti has recently been awarded the highest Slovenian architectural recognition for the project, the 2020 Plečnik Award, and the building is among those nominated for the 2022 EU Mies Award. As the centre was completed in February 2020 at the beginning of the Covid crisis, it has now been waiting a good year, as a ‘fresh clean slate of white’, for its broader activities to start taking place. 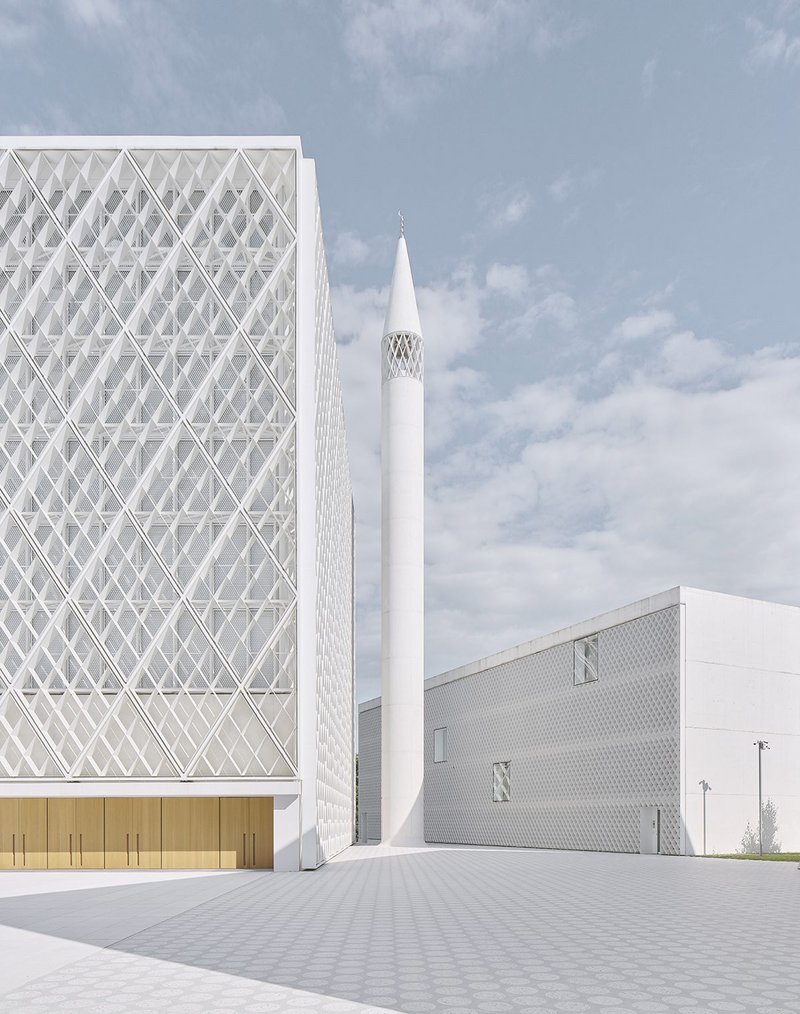 The 40m-tall minaret next to the mosque box – the project transforms a redundant area into a permanent home that establishes the presence of the Islamic community in Ljubljana and for Slovenia as a whole. Credit: David Schreyer

Andrej Strehovec is an architect, critic and writer based in Slovenia.