Glass and granite in Dublin 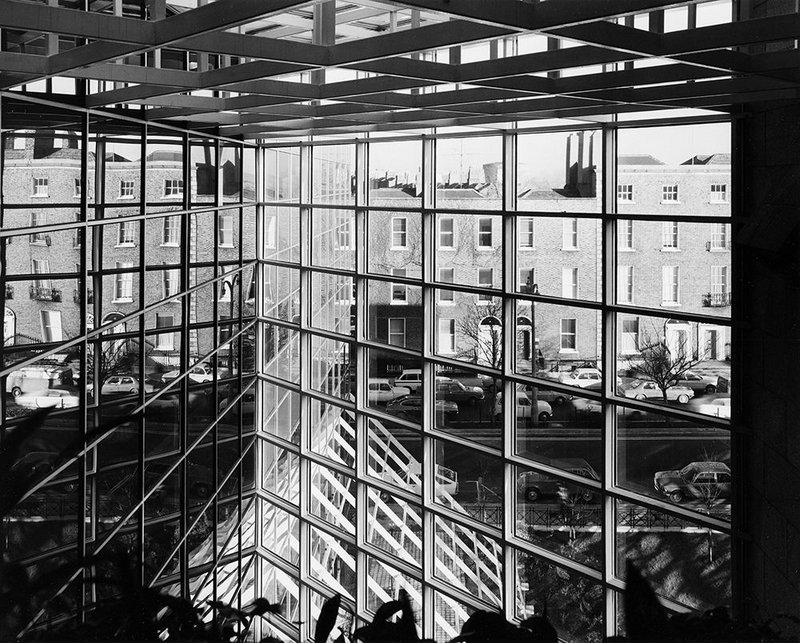 Dublin’s Baggot Street has a history of architectural experimentation. In the 1960s Scott Tallon Walker built the innovative but rather foreboding Bord Failte headquarters and later the monumental Bank of Ireland, setting the standard for modern office developments in the area.

Sam Stephenson’s 1978 building for Bord na Móna, the Irish peat harvesting company, followed suit: an unashamedly modern design juxtaposing angles and piers of hammered Wicklow granite with mirrored glass curtain walling. Its substantial bulk is tempered with a deep forecourt punctuated by an aluminium planting pergola and full, five storey glazed atrium. Unlike his contemporaneous Central Bank of Ireland building on the edge of the nearby Temple Bar district though, the relatively small scale and reflective cladding here seek to harmonise with its Georgian neighbours not overpower them.

The Central Bank, though impressive, remains a controversially bulky presence towering over the historic streets of the old city: very different from the subsequent Temple Bar framework plan worked up by O’Donnell + Tuomey and its fellow Group 91 Architects, which aimed to regenerate the area sympathetically and conserve the existing urban fabric.