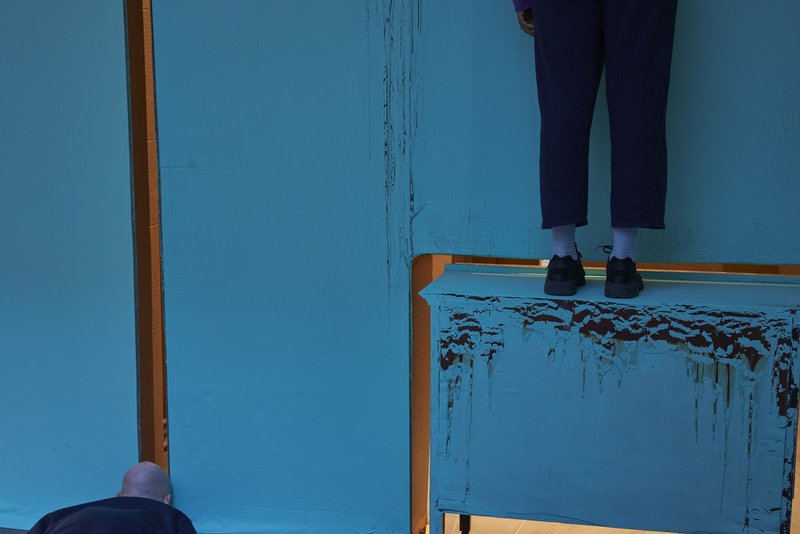 Entitled Something Necessary and Useful, the piece is an immersive installation that occupies all of Gallery 2, a double-height space that was once a library reading room. Bunga is known for his large-scale cardboard works that combine painting and spatial elements with temporality – pieces evolve throughout the exhibition as he moves, cuts and reconfigures them in a continuous process of change. This is again the case at the Whitechapel, with the added inclusion of pieces of furniture and occasional dance performances that will move through and interact with the structure.

Bunga, who has for many years lived in Barcelona, was not familiar with London’s East End before the commission. Visiting the gallery in preparation for the work, he was deeply struck by the intense gentrification under way in the area. In part, his installation is a response to this.

He likes to work in a responsive, highly experimental way, without the use of preparatory drawings and with no certainty of the outcome, inviting visitors to observe as he builds the transitory installation.

‘One of the strongest aspects of my work is process. If we are more conscious of the process, it changes our perception of the reality,’ he says.

Bunga sees visitors as activating his work as they move around the space and touch the surfaces.  Only when people are inside the space, he says, does the piece ‘start working’.

‘It’s alive. It’s organic, and is in a constant state of transformation between the dancers and myself and also the public…It’s a project that people can participate in and feel alive.’

He describes the installation as ‘like a very big painting in space’. This rather understates the many different things going on which make it such an engaging work.  He has created two gallery-high, wall-like structures, one white, one green to suggest the old and the new aspects of the area. These run in parallel the length of the space, with extra new columns being added to the existing ones, the artist enjoying the fact that visitors may not be sure what is old and what is new. The use of cardboard also gives these new city walls an air of fragility.

These walls are painted externally, using a technique of paint on areas of glue to create a distinctive distressed, cracked effect. This is, Bunga says, suggests not only ageing buildings but skin, with all its hairs, glands and imperfections, and mortality and time.

‘I want the work to represent organic imperfection,’ he says.

Slotted into spaces left within the walls are pieces of old furniture such as sewing tables, chests of drawers and mirrors, sourced in local junk shops and painted on one side to match the walls. On the inner side, the space and furniture is unpainted, revealing the true nature of the objects and giving this area more of a domestic atmosphere.

For the first time in his work Bunga references the Shakers, a movement he admires both for its interest in equality and its simple way of living, as a symbol of the home. Around the gallery wall he has installed a Shaker-style peg rail, with Shaker-influenced chairs and objects including tools and ladders hung up to create a domestic perimeter for his city-referencing cardboard structure. He sees the rail as both alluding to the area’s making history and as working like a frame for the installation. The title of the piece, Something Necessary and Useful, alludes to the Shaker philosophy.

Off the main gallery are paintings that incorporate vintage photos of the space as a reading room – Bunga says he was interested in conveying the ‘ghosts’ of this former use in his work. A further element is a subsidiary installation of suspended painted fabrics hanging in the nearby stairwell suggesting, he says, an abstract connection with the home.

He has no idea how the work will end up by the end of its time in the gallery, after his many adjustments and after the various dance performances, which will be choreographed by Joe Moran. He’s thinking of maybe shifting the walls across the gallery, while leaving traces of where they once were just as the cityscape bears traces of its past, hinting at ideas of movement and displacement. There are likely to be new cuts and new configurations, striking a chord with the frantic pace of gentrification going on all around. Perhaps it will be in a state of collapse.

It will be fascinating to come back again at the end of the installation to find out. But even then, for Bunga, the site-specific work is never really over.

‘I never accept that my work finishes. Even when it’s collapsed, there’s still what people say, and what people write [about it].’

His work is on a constant journey of experimentation and reiteration. At the Whitechapel installation, for the next seven months or so, we get the chance to hitch a ride.