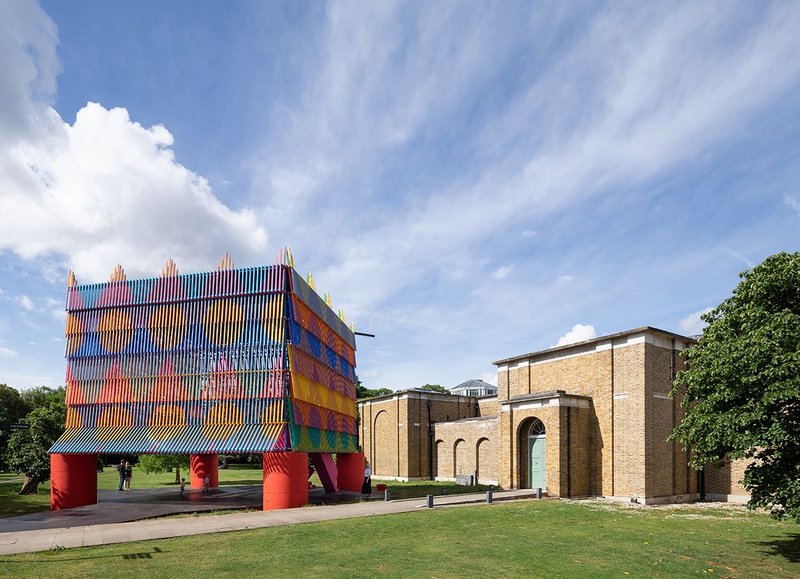 The Colour Palace, a summer pavilion designed by Pricegore and Yinka Ilori at the Dulwich Picture Gallery, 2019. Credit: Adam Scott

The Colour Palace, the second summer pavilion commissioned by Dulwich Picture Gallery, reveals itself some time before visitors enter the gallery grounds. As you approach the gallery entrance from nearby Dulwich Park there it is, visible above the perimeter wall in an uplifting burst of many colours topped by an array of triangular crenellations.

It’s not difficult to see why this highly engaging pavilion, designed by architect Pricegore with artist Yinka Ilori, impressed the competition jury, even if surprisingly it didn’t win the public vote.

Striking and exuberant, this is feel-good architecture that makes for a pleasing venue for the gallery’s summer events programme and, in doing so, an effective ambassador for the gallery’s efforts to engage new audiences. It has a friendly look about it – and with its short, chunky ‘legs’ you can almost imagine it setting off for a trundle around the grounds.

According to Pricegore co-founder Alex Gore, part of its appeal is that it is ambiguous enough to be interpreted in many different ways.

‘It can be whatever people think it is. It can be high culture. It can be pop culture. A mix of these things is good,’ he says.

The collaboration arose after the architects met Ilori, a British-Nigerian artist, when he moved into the artists studios they’d designed in Wealdstone. Based at the time in Peckham, the architects were keen to explore a culturally inclusive approach that reflected the diverse population of south east London in their proposal for Dulwich’s summer pavilion.

Challenged to create a temporary outdoor events pavilion for 100 people, the team quickly arrived at the idea of an approximately 10m3 cube form, inspired by the cubes and double cubes of Soane’s design for the Picture Gallery. Research into the tradition of lifting storage buildings off the ground – something common across Europe and Africa – led to an exploration of delicate structures raised on monumental bases. This informed the eventual incorporation of four stout legs at each corner to raise the structure. At the same time, the design team was exploring themes of geometric patterns in facade informed by both Pricegore’s European architectural education and Ilori’s Anglo-Nigerian heritage. Along the way, this took in everything from the Doge’s Palace in Venice to houses and gates in Lagos and west African textiles. Ilori created fabric patterns to express the intense feeling of the hustle, bustle and heat of his regular market in Lagos and then evolved these into a strong graphic pattern of triangles and circles. These are created on the outer, tiered facade of the pavilion using thousands of hand-painted battens of 50mm x 50mm pine, which then continue to form the crown-like crenellations.

‘It’s both monumental and delicate. It’s flat and graphic but also has depth,’ says Gore.

The team worked with engineer HRW to realise this vision of colour. In accordance with the tight £150,000 budget, the pavilion feet are formed of concrete manhole chambers painted bright red. The inner structure is of Douglas fir while the outer cladding is formed by seven tiers of 2m long pine battens, overlapped so that only the lower 1m of each is visible. The front face is painted to form the geometric pattern, while the sides are one solid colour per tier in different colours progressing up the pavilion. The aim, says Gore, is to evoke a layered, woven-like facade and encourage people to move around the pavilion and experience the different colour combinations.

Inside, two pink plywood staircases lead to a narrow gantry overlooking the inner space with views out through the timber cladding into the gardens. This pink is reminiscent of the handrails in Stirling and Gowan’s Engineering Building at Leicester, and Gore agrees that Stirling turned out, albeit unconsciously at the time, to have been an influence on the project. Everything is bolted together in the hope that the pavilion can be dismantled and re-used by a new owner after its stint at Dulwich.

Initially the design team conceived the pavilion running parallel with the gallery before deciding to twist it by 45 degrees to better address the visitors as they enter, a small but effective adjustment. Although the top of the pavilion is apparently no taller than the highest roof light on the gallery, the intervention, by dint of its form and colour, seems taller to the eye. Certainly the designers did not shy away from making a big impact alongside the more understated gallery.

‘We felt Soane would be okay with it. He was pretty radical,’ says Gore, who hopes that the design reflects the capital’s multi-cultural society and helps the gallery reach out to different audiences, as well as simply being an enjoyable place to spend time.

‘We think it is a provocation,’ he adds. ‘But a joyful one.’