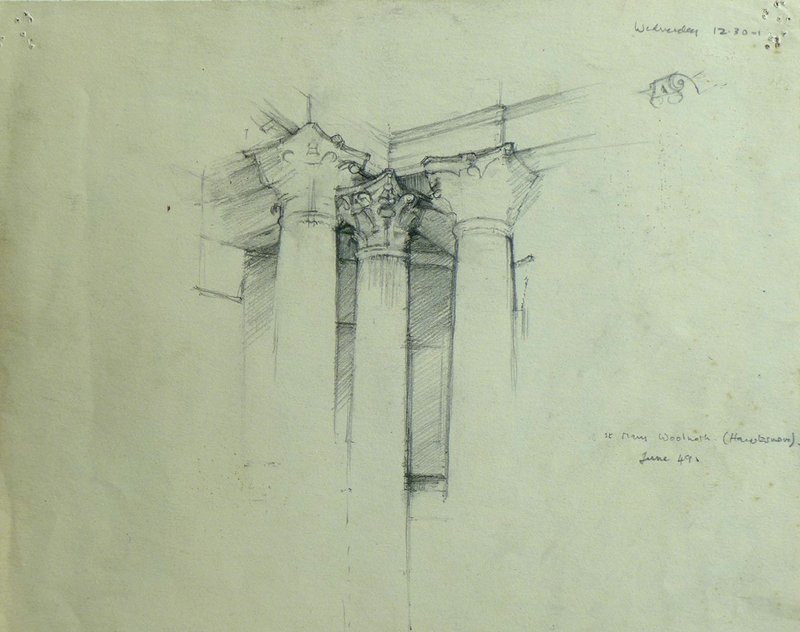 As a young art student in 1949, Anthony Eyton made a sketch of Nicholas Hawksmoor’s St Mary Woolnoth church in the City of London, concentrating on the massing of three columns. Now, decades on and following a distinguished career as an artist, he has returned to the subject of Hawksmoor’s churches in work for a new exhibition at the Eleven Spitalfields gallery.

Now in his nineties, Eyton has completed 25 pastels and oils for the exhibition since 2012. He is drawn to Hawksmoor because of the ‘grandeur and invention’ of his baroque designs and also the way that his buildings make the presence of man seem very small in comparison, just as Piranesi was to do in his work some 50 years later.

Most of the work is in pastels, a medium which the artist enjoys because of its immediacy and malleability. Eyton’s pastels focus on the churches amid the hustle and bustle of contemporary life.

‘You can pit traffic and people against the facade of Hawksmoor but Hawksmoor wins. He is dominant,’ says Eyton, who compares the architect to Bach in his assemblage of form and repetition.

As well as new work, the original sketch from 1949 is included in the show. Other subjects include St George’s, Bloomsbury, which Eyton is particularly enjoys, as well as Hawksmoor’s great masterpiece Christ’ Church Spitalfields, located close to the gallery. Eyton knows this well from the many years he spent living in the area, describing the church as ‘a bit like a white whale’.

‘There is a sense of awe when you come into its proximity,’ he adds.