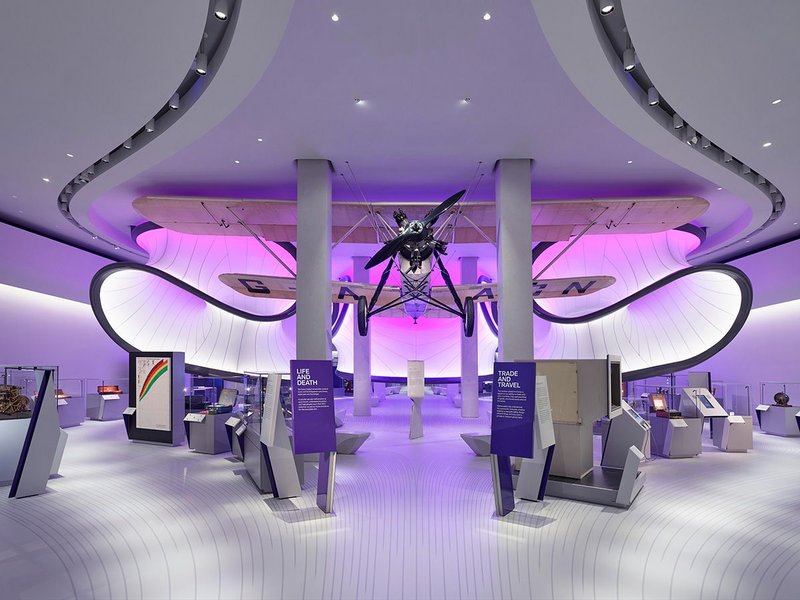 Mathematics: The Winton Gallery at the Science Museum designed by Zaha Hadid Architects. The exhibition design is inspired by the aerodynamic research behind the design of the 1929 Handley Page ‘Gugnunc’ aeroplane. Credit: Nick Guttridge

'Mathematics: The Winton Gallery' at the Science Museum is the first permanent gallery designed by Zaha Hadid Architects. It’s a real cracker, not only in terms of the dramatic sweeping design but in the extraordinary content that even the most maths-phobic visitor can appreciate – who could fail to be impressed at Britain’s oldest pocket calculator, which dates all the way back to 1670-95? The gallery aims to convey the great importance of mathematics to all sorts of aspects of our lives such as health, finance, peace, trade, form and beauty – and in this, it succeeds in style.

Given Hadid’s background studying mathematics, this was something of a dream project for her office, which won the commission in competition a couple of years ago. The design gets the balance right between the setting and the objects. For sure, the gallery’s extraordinary central feature grabs the attention initially. Created with tensile fabric stretched over an aluminium structure and resembling some strange exotic bloom, this flamboyant flourish is no mere affectation but is inspired by one of the key exhibits – the Handley Page ‘Gugnunc’ aeroplane. Built in 1929 for a competition to construct safe aircraft, the plane’s experimental design arose from pioneering aerodynamic research that helped reassure public of the safety of flying.  The gallery layout, canopy and contours are designed to represent the flow of air around the aircraft in flight.

‘The fluid dynamics gave us a tool that easily lent itself to organising the space,’ says Zaha Hadid Architects project senior associate Bidisha Sinha, adding that this central element is intended to provide a more intimate space and a ‘moment of pause’ as visitors progress around the gallery.  At the same time, the flowing nature of the form, amplified by the contours of the ceiling and the patterns of the resin floor, create a characteristically dynamic effect.

Yet elsewhere in the gallery, it’s the objects that take centre stage, and are so engaging that the visitor avoids being distracted by the exciting setting.  This gallery has the potential for a long-stay visit – and fortunately there are plenty of Ultra-High Performance Concrete (UHPC) benches on hand for those who want to take a breather from data crunching, codes, and probabilities of the many machines on show here, from Babbage & Lovelace’s early computers through to Enigma, tide predictors, pension calculators, and a huge dog racing tote machine. There’s even Guinevere, the National Lottery machine from the 1990s.

Many objects are fascinating not only for their mathematical value, but as beautiful artefacts in themselves (though this can’t be said for the 1970s cash till – were they really that huge and clunky?). Don’t miss the architects’ set of instruments from the section on Form and Beauty. Dating from 1800, this opulent boxed set opens out to reveal dozens of gleaming instruments from set squares to tools nestled in plush blue lining.

Other architectural exhibits include an architectonic sector from 1770, designed to aid calculations for drawing different architectural orders, a 1543 copy of Vitruvius and a 1920s sliderule for calculating reinforced concrete. I was also fascinated by the foreign weight depository from the Royal Mint from 1818-20. This huge cabinet was designed to hold different weights from all over the world to enable it to calculate the relative values compared with its own.

Science Museum director Ian Blatchford described the gallery as a ‘noble and lasting tribute’ to the vision of Zaha Hadid, who died in March. Anyone left wanting more Zaha can stroll up to Hyde Park where the Serpentine Sackler Gallery is showing an exhibition of her early paintings and drawings.