Deborah Saunt and David Hills, founders of DSDHA, refuse to be boxed up by specialisms 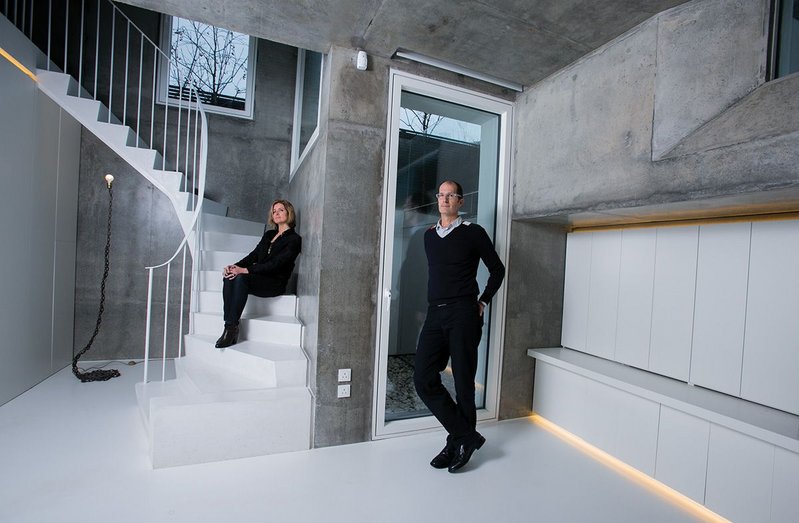 Not for nothing is the home of Deborah Saunt and David Hills in Clapham known as the Covert House. For a start, it is remarkably difficult to find – through a gate down an alley leading to a mysteriously landlocked Victorian house, then left through another gate into the backland between the gardens of the streets to either side. Finally you get to what appears at first to be a compact single-storey new dwelling on a plinth – white, its frame, window and door openings dematerialised by mirrored reveals. Closer up, it discloses itself as a two-storey house, sunk into the ground. Once through the front door, you find a stair plunging downwards. Saunt’s voice drifts up: ‘Make yourself at home.’ Our photographer is finishing his portraits. I take a seat on the Hans Wegner 1950s-designed sofa in the upstairs living room.

The Covert House – an exercise in monolithic in-situ cast concrete and the play of light in which, as Saunt says, ‘white becomes a material’ – is an object lesson in how a determined architect can achieve good results against all odds. The pair found the run-down hidden Victorian house with its big, wholly overgrown garden bristling with self-sown sycamores, persuaded the owners to sell, divided the site, built the new house in the former garden and sold the old one to friends. Needless to say this process was protracted, given some well-heeled neighbours inevitably inclined to object. Hence the self-effacing nature of the house, its edges deliberately ambiguous. Water, glass and polished stainless steel play games with transparency and reflectivity. The family finally moved in, finishing off the house around them, last year.

With a recent practice move to a new studio in Vauxhall converted from a Victorian industrial building (another savvy property purchase, right at the heart of what is a fast-regenerating area and close to the Vauxhall Pleasure Gardens park which they planned), and with a healthy office head count of 36, it’s a pivotal time for the practice. Fellow DSDHA directors Tom Greenall and Martin Pearson spread the client-relationship load, increasingly representing the practice themselves. ‘That’s the size we like it,’ says Hills, noting that to an extent they can regulate studio size by juggling projects they supervise and those in which they collaborate with other architects. Some clients – such as developers Derwent London or Berkeley Homes – have well-established working drawings and project-management procedures which to an extent make the size of the design practice irrelevant. For their large Berkeley Homes blocks in Westminster, they are working with EPR. ‘We don’t want a big back-of house’, confirms Saunt.

Saunt and Hills – she born in Australia but long UK based, he from Essex – set up officially in 2001. She had worked for Tony Fretton, he for Erick van Egeraat’s London office. Arguably these two strands of influence – the ultra-restrained versus the Dutch-flamboyant – have woven through their work ever since, sometimes manifesting themselves on the same building. Before that they had trained at Cambridge and both worked for MJ Long of Long and Kentish.

From the start, DSDHA was a name to note, not least because of Saunt’s engagement with public debate and, later, TV profile. Both set great store by teaching – at Cambridge of course, though more recently Saunt has moved allegiance to the Cass while Hills concentrates more on practice. The output was always interesting, from schools through housing to art and craft galleries. It has always looked beyond the confines of the building. Their teaching has tended to concentrate on urban planning, which helps explain why the practice is known for many public-space projects, especially parks. A key one at the moment is the ‘greening’ of areas of Camden, north of the impending Tottenham Court Road mega-interchange. One aspect of this is turning Alfred Place – running north from the Building Centre and New London Architecture – into a lush mini-park. This will work with other pocket parks and street modifications in the area – all commissioned by the Borough of Camden as part of its West End Project to help absorb and ameliorate conditions for the bustling population once Crossrail is in operation.

Other large housing schemes are under way in Camden’s Somers Town and Greenwich Peninsula, while they continue with smaller projects such as a second work premises for jeweller Alex Monroe. Talk of schools – a steady strand of their work – gets us onto two aspects of their approach which they feel strongly about – not being typecast, and needing real client feedback. DSDHA doesn’t have a house style or a particular specialist area of expertise – they are resolute general practitioners, and now large enough to offer multi-specialisms. ‘We didn’t really pursue BSF schools,’ remarks Hills at one point. ‘There wasn’t a conversation there. I’ve been to a lot of consultation meetings, and there can be a formula to them. But to let users inform the design in a real way is to take it right into the design process.’ The whole BSF programme was just too faceless for them. Besides, DSDHA famously prefers projects with a strong element of research, and to get those you don’t want clients that are too risk-averse. Yet it does land the clients: before it built the biggest residential building in the 2012 Olympic Village (now East Village), it had never done a housing block. 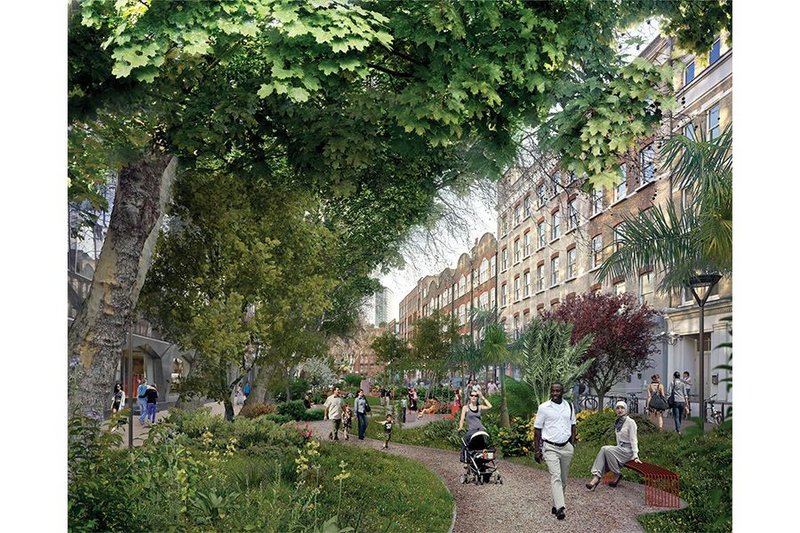 Alfred Place near Tottenham Court Road in London, redesigned by DSDHA as a pocket park.

Then it’s off in the Prius to see the new office, in an oasis-like urban yard at the heart of the Vauxhall fleshpots. ‘That’s a Korean knocking shop,’ says Saunt gleefully, peering out at a nearby building. Their own shop is a small four-storey hive of a building, originally an ‘essence’ or perfume works. It’s well packed with DSDHA people. Everyone takes part in charettes for competitions while the four directors lead design reviews every Wednesday. And if the two founders, still young by architecture’s standards, aren’t there, the reviews happen anyway. There’s a collegiate feel to the place.

So how, in the end, would one define a DSDHA project? Saunt has the answer: a dash of the unexpected, like the Covert House. ‘We want our buildings to slightly pull the rug out from under people,’ she says.