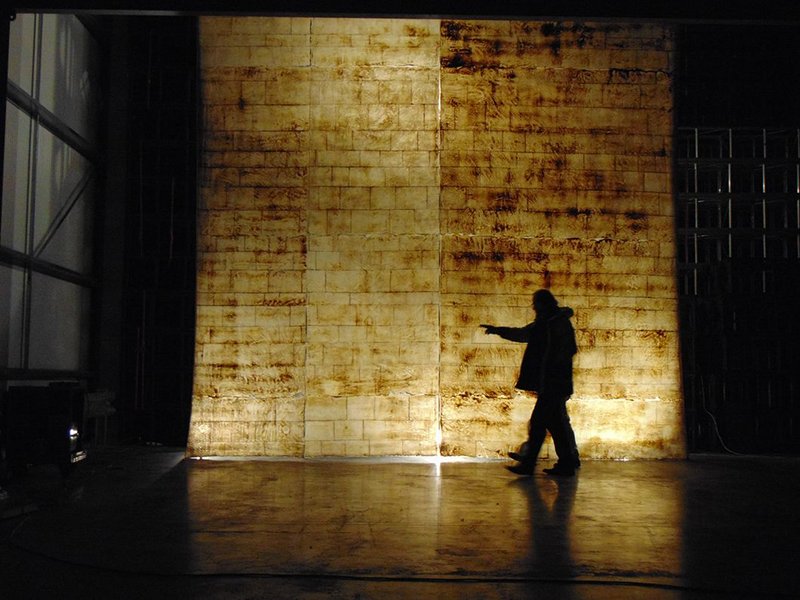 What does a thousand years of dust and pollution do to the inside of a building? Jorge Otero-Pailos’ installation The Ethics of Dust will show just this when it is unveiled on June 29 in Westminster Hall at the Houses of Parliament, London.

The project, the latest site-specific piece commissioned by Artangel, has been some six years in gestation. It is an extraordinary undertaking, creating a latex cast of the entire 50m long east internal wall in the Hall and suspending the resulting translucent curtain from the rafters. Completed in 1099, the Hall is the oldest part of the Houses of Parliament.

Otero-Pailos, an artist and architect based in New York, has long been fascinated with Westminster Hall as a result of his interest in John Ruskin’s obsession with both the Hall and the Doge’s Palace in Venice, and in particular their brushes with what Ruskin felt was inappropriate restoration.

The Westminster installation follows his latex casting of the Doge’s Palace in 2009, and explores his interest in the residual effects of environmental pollution on buildings such as dust, soot and dirt. His other castings include the inside of Trajan’s Column in Rome.

‘I’m interested in expanding notions of what we consider to be relevant history. People tend to associate Westminster Hall with big political history but there’s another history that these buildings register – the longer time frame of changes in the environment,’ he says, adding that Ruskin’s 1866 The Ethics of Dust publication made it clear that dust and the patina of time had an important historic value.

Through the casting process, Otero-Pailos hopes to make visible deposits previously seen as of little value and recast them as something worth recording.

Casting The Ethics of Dust has been a laborious process and is his largest casting to date, with a team working in the hall over the process of two years. Although the final installation will only show the east limestone wall, the project has cast all four walls in conjunction with the Houses of Parliament’s restoration team. The latex was applied as a liquid, which sucks up the dust and surface pollution into its own surface as it dries leaving the actual wall free of deposits and the latex encrusted. The thin cast is then peeled off and carefully stored in rolls before assembly.

The process was complicated by the need to be able to vacate the space with all scaffolding and latex within six hours if the Hall was suddenly needed for uses such as a lying in state. As a result, many smaller castings were made, although in theory it would have been possible – though difficult – to cast the wall in one go. All these were then pieced together into one hanging.

The wall casting will be suspended like a curtain from the hammerbeam roof just 4m away from the original wall, and will be illuminated from the dust side. As a result, one side will appear like a solid wall but the other will look translucent. It will hold a memory of its many centuries – with outline traces of where sculptures and other fixings were once attached, and with the blackening of historic smoke pollution most visible closest to the doors on the northern side.

Otero-Pailos hopes his installation will also bring attention to Westminster Hall itself, and its extraordinary survival, and perhaps prompt visitors to consider what buildings they want to survive in the future.

‘It’s important to showcase the building’s importance. My work is an invitation to do a double-take and take a second look at Westminster Hall. People talk about not the building but the events that have happened there. They barely engage with the building as this incredible vessel that’s survived for a Millennium in its original purpose,’ he says.

When the installation ends in September, Otero-Pailos hopes that the casting might be kept in the public realm in the UK. While the Westminster Hall casting concludes his original dialogue with Ruskin and the Doge’s Palace, he has become increasingly fascinated with the artistic possibilities of the deposits of environmental pollution and is already planning further castings.