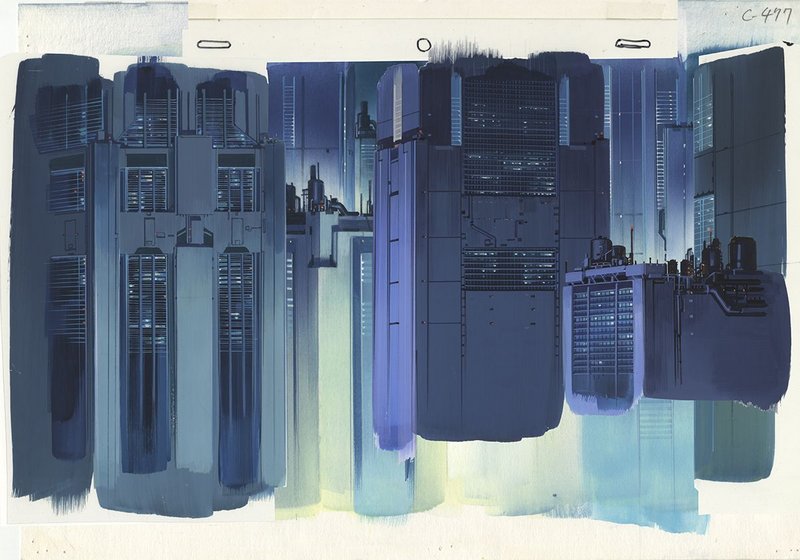 What inspired the futuristic cityscapes of Japanese anime (animation) films, and how were they created? The exhibition Anime Architecture: Backgrounds of Japan, seeks to reveal the virtuosity of the creative process behind some of the classic films from the 1990s heyday of the genre.

Shown at the House of Illustration, the exhibition is the first of its sort in the UK. While anime fans will no doubt love it, you don’t have to be familiar with the films to appreciate the level of artistry that goes into creating the architectural backdrops – the sets that are so fundamental to the design of these films.

The painstaking production process is explained through displays of more than 100 original technical drawings and illustrations from four films. Japanese anime dates back to 1917 and these late 20th/early 21st century works were made at the turning point between hand-drawn and digital artwork. Films such as Mamoru Oshii’s Ghost in the Shell (1995) make use of both. Nowadays, only a handful of studios produce manually painted backgrounds, with each highly specialised stage accomplished by different artists. 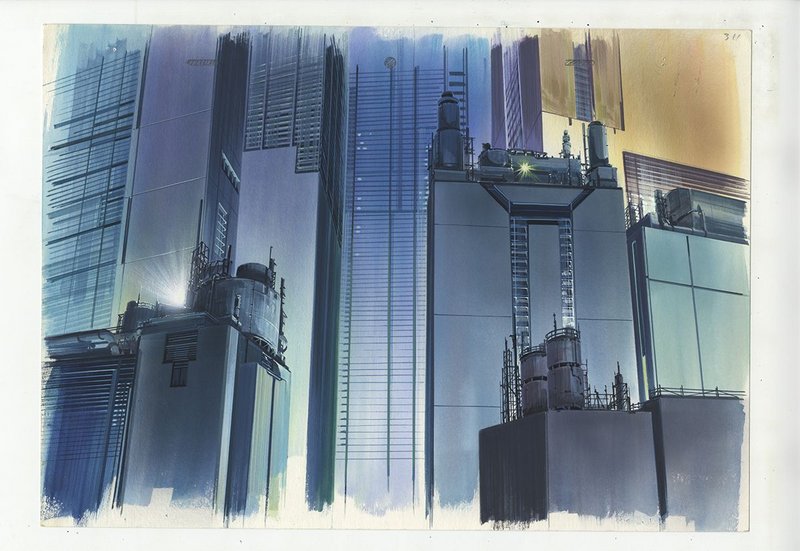 The settings for these films share common themes relating to the pace and scale of urban development, and specifically the replacement of humble, vernacular buildings with gleaming high-rises which loom, seemingly malevolently, in the background.  These were directly inspired by the fast-changing urban landscapes of real Asian cities. We learn how Oshii was the first anime director to use location photography as part of the creative process in the late 1980s and that his film Patlabor: The Movie (1989), was the first to give backgrounds as much importance as characters.  For this, location photography by Hawhiko Higami captured the forgotten canals and old, wooden houses of Tokyo, and these images in turn inspired the evocative backgrounds produced by art director Hiromasa Ogura. These are contrasted in the film with large-scale new development, the site of the action central to the plot.

Oshii’s Ghost in the Shell (remade as a live action film this year) is set in 2029. The cityscape was inspired by the fast-vanishing vernacular architecture of Hong Kong, which Oshii and his team visited several times as part of their research, and its contrast with the rapid new development. Photos of Hong Kong, produced in monochrome so as not to hamper the art director’s colour palette, inspired Ogura’s watercolour image boards and backgrounds, even incorporating the halo effect around the streetlights caused by a misted-up camera lens. These make clear the sharp contrast between the old and the futuristic new architectures, with the sense of unease mirroring the main character’s struggles with questions of identity and authenticity.  In the final anime, the old cityscape is depicted in warm colours and subdued lighting in sharp contrast to the cold blue tones of the new city.

Background design concepts and image boards were in turn the basis for the layout drawings, with the layout artist creating one line drawing per cut. The background painter then uses the architectural design of the set to create background images in the appropriate palette, and these are then photographed to appear in the final film.

Exhibition drawings include Takashi Watabe’s concept designs for the sequel Ghost in the Shell 2, showing the setting for the final showroom on the inside of a cyborg production facility on a ship in the ocean – a fantastically intricate mass of cables, pipes and tubes.

Directed by Rintaro, Metropolis was a 2001 anime derived from a manga version of the silent Metropolis film of 1927. The exhibition focuses on Watabe’s hugely detailed drawings of fictional settings for scene 10 – the only paper-based works in the film. These were scanned and coloured digitally by background designers. The exhibition shows how layout drawings were produced in layers – background, middle ground, fore ground – to enhance the sense of spatial depth on the futuristic urban setting.

Anime Architecture: Backgrounds of Japan deliberately focuses on what curator Stefan Riekeles describes as the ‘sheer beauty’ of the drawings and the worlds they create, rather than the plot or main characters. To see how this artwork fits into the final films, we have to wait until the last room, where a series of all-too-short excerpts are screened.

As eloquent as the artwork is, I could have done with rather more of the finished films as well, and maybe also a few interviews with some of the leading protagonists. But this exhibition is a great taster for the anime genre – and, armed with the knowledge of how these evocative backgrounds were created, left me wanting to track down the films to watch in their entirety.