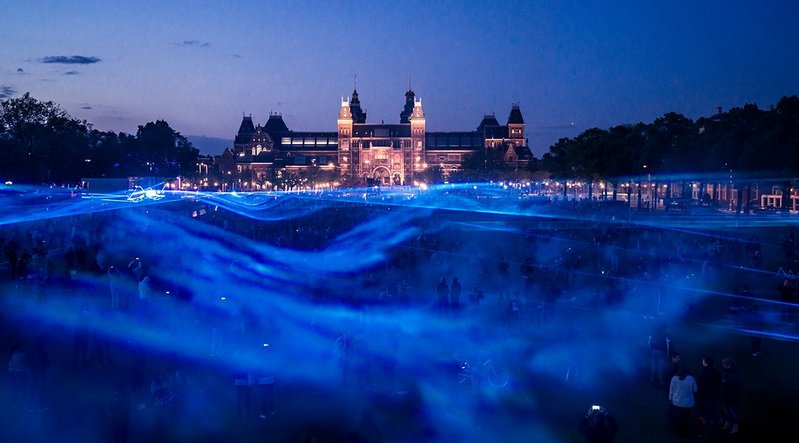 I’m rather taken with the word nightscaping – a term (new to me) that relates to the design/utilisation of the urban environment for night time activity. This is the main thrust of the exhibition Night Time is the Right Time, which showcases ideas from a competition ran by the Built Environment Trust and the Mayor of London for ways to help the nightlife of cities work better.

‘We have a city that’s exciting and bursting at the seams to achieve all it can. Yet it’s full of inefficiencies, with space oversubscribed at some times and undersubscribed at others,’ according to chair of the competition judging panel Lewis Blackwell.

The Building Centre exhibition makes a timely case for why there should be greater consideration of night time uses in response to changing behaviours. We learn that the UK’s nocturnal economy is worth £66 billion per year and employs 1.3 million people. Two factors in particular are identified for the increase in night time activity – globalisation and the digitalised post-industrial economy, which have both contributed to a re-shaping of work and social habits. Yet cities, including London, can be slow to respond to and nurture these trends as opportunities for the benefit of residents and visitors alike. Indeed, the capital lost 35% of its music venues between 2007-17.

Judging by the international nature of many of the competition entries, the art of nightscaping is being explored widely from inflatable nightclubs and energy-generating dancefloors through to streetlighting drones.

‘The quality [of entries] was extremely high. It was nice to have a mix of the very pragmatic alongside highly creative explorations of what nightscapes can look like,’ says Blackwell, adding that many places at night can seem unloved, underused, and a bit threatening.

Some ideas concentrate on making better use of underused building assets by suggesting additional uses for places that would otherwise not be used at night such as Battle McCarthy’s Night-Time Pop-up Station City, an idea for street markets for start-up companies in train stations. The myKanaal concept – which won the top prize in the competition – proposes an app-linked mobile canal street market, operating around the clock in London, which animates previously intimidating nocturnal towpaths.

There are also ephemeral pop-up ideas such as the Shelter inflatable night club by Bureau A in Geneva and the nicely named Carpe Noctem by DP Architects, a demountable pavilion designed to stimulate pop-up uses before being relocated to another part of the city to do the same again there.

Others tackle anti-social behaviour and seek to improve safety at night time. HCMA Architecture + Design’s Alley Oop project in Vancouver introduces lively new uses for alleys that may previously have been no-go areas. Faltazi’s Uritrottoir open-air urinal, already installed in some parts of Paris, is a novel way of dealing with troublesome street weeing – the liquid is absorbed by straw and sawdust in a composting bin, which can easily be emptied.

Several entries considered new ways of providing streetlighting. Direct Line’s Fleetlights concept deploys drones to illuminate areas without street lights when in night-time use. A very different street light solution was proposed by Glowee, which harnesses bioluminescent marine organisms. In the Dutch town of Eeneind, TV iLight’s sensor-based streetlights are activated by street usage to increase brightness from 20% to 100% in both the areas of use and their neighbouring lights when triggered. I like the idea of Jenny Sabin’s Lumen textile structure, which uses photo-luminescent and solar active yarns to provide ‘knitted light’ by night.

Many other creative interventions are proposed to enliven underutilised spaces, sometimes at the same time prompting regeneration by contributing to the branding of the city. Musical Swings is an illuminated swing/interactive musical instrument designed by interaction studio Daily Tous Les Jours to delight and encourage participation. Wabash Lights, proposed for the underside of elevated railway tracks in Chicago, is an app-driven interactive lighting installation. The Waterlicht installation by Studio Roosegaarde, used light to show how shockingly high Amsterdam’s water level would be in without dykes, and is now proposed for other cities. In London, we can look forward to the Illuminated River project to light up 17 bridges in the capital in 2018.

This is a small show, but it’s full of bright, stimulating ideas.