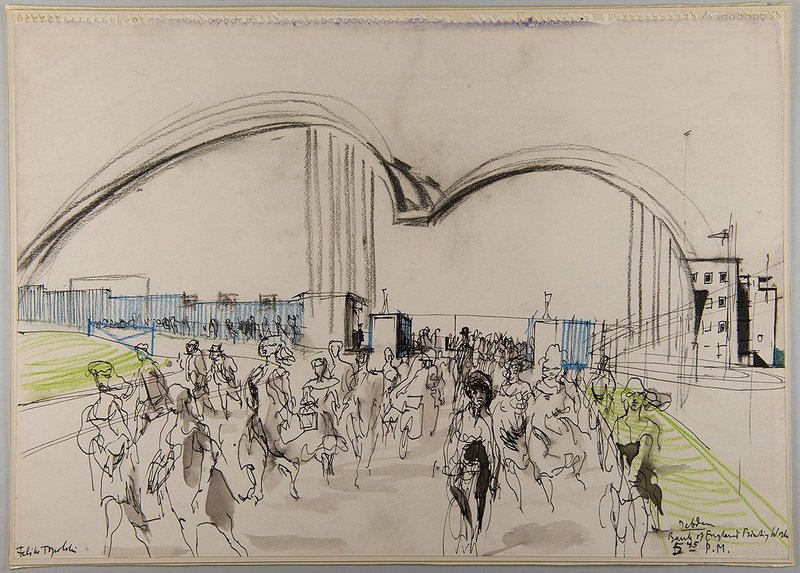 In 1941, a vivid image by London-based Polish artist Feliks Topolski of bomb damage outside the Bank of England in the City of London was deemed unsuitable for public consumption and was swiftly acquired by the Bank for out-of-sight safe keeping – Topolski’s expressionistic style had proved too candid for the Blitz-battered times. Sixteen years later, however, the Bank approached Topolski with a new commission – to celebrate its state-of-the-art banknote printing works at Debden in Essex, a major development for the Bank designed by architect Sir Howard Robertson and engineered by Ove Arup.

The results are on show at the Bank of England Museum in the fascinating exhibition Feliks Topolski: Drawing Debden, which features a collection of 27 drawings and three paintings. Several of these capture the dynamic roof form of the modern factory, an impressive mid century modern production facility that enabled all the key production stages of printing bank notes to take place in one 240m long space. This model of efficiency enabled the Bank to print three million more notes each year than before. What a change from the cramped facilities which Debden replaced, housed in the former St Luke’s Hospital for Lunatics near Old Street, designed by George Dance in the 18th century.

By the time of the commission, Topolski’s reputation had grown considerably. Building on his extensive work as war artist and at the Nuremberg Trials, it was to continue over the following decades with a mural at Buckingham Palace and many portraits of notable cultural figures. Topolski was highly impressed with the Debden building, remarking on the ‘uncompromising modernity’ of the works, which seemed to him to be a model of what an industrial plant should be.

While his drawings vividly captured the modernity of the building, it’s the workers that Topolski was really focused on – depicting them at work en masse in the great production hall and capturing the various stages of production from lithographic and plate printing to numbering, cutting and quality control. We see workers inspecting sheets of notes and individual batches – incredibly a checker would inspect thousands of notes per day – the charcoal sketches embellished by splashes of colour, in particular the blue of the staff uniforms. Some of the most engaging are those of the workers on their breaks enjoying the staff canteen and leisure facilities such as darts and table tennis. These include closely-observed depictions of real people, from older ladies knitting on their break, to the younger woman eagerly eating her lunch with one hand and stirring her tea with the other.

There is a real sense of workforce community, drawn from the many ex-Londoners attracted to Debden after the war by the new housing estate.

‘It’s a record of ordinary members of staff that you wouldn’t normally see captured by a big institution,’ said Bank of England Museum curator Jennifer Adam, adding that the drawings evocatively convey a sense of place and the people at a time of post-war social change.

Once again however, the reception was not wholly positive when the drawings were exhibited at the factory, with many of those depicted unhappy with the energetic style, that was not necessarily always sympathetic.

‘If you found yourself immortalized in an expressionistic sketch eating your lunch or scowling over your work, it would be a bit of shock,’ says Adam.

Today, however, these images appeal as engaging portraits of life in the works. What a refreshing contrast to the other more formal works of art that the Bank of England previously commissioned, some of which literally loom large about the Feliks Topolski exhibit. These include a painting of Sir Herbert Baker, the architect who rebuilt the Bank of England, pictured immaculately dressed with rolls of architectural drawings accompanied by a few of his greatest hits. The Debden drawings are quite a different kettle of fish – ordinary people going about their extraordinary work of making the nation’s money.