The V&A relives the sumptuous heyday of the ocean liners, the worlds they created and their ultimate decline in an alluring show 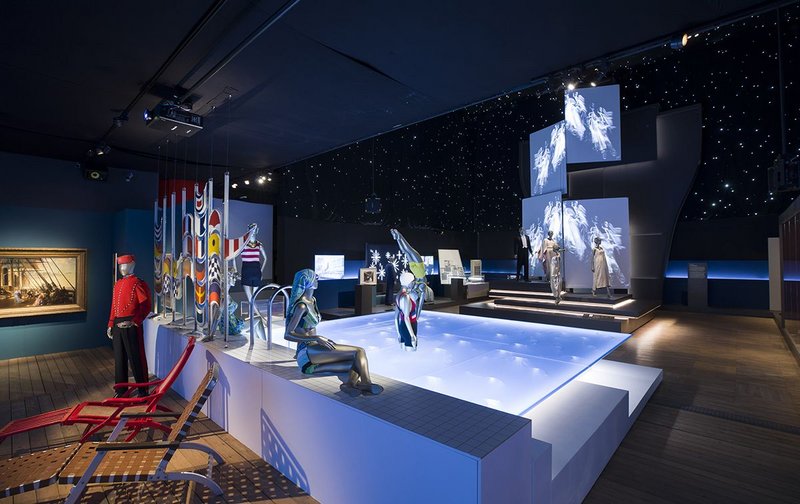 Yes, there’s a clip from Titanic and the recreation of a post-sinking raft adrift in the sea in Ocean Liners: Speed and Style, the new exhibition from the V&A. But don’t let that put you off. From immigration-enablers to pleasure palaces, military assets to symbols of modernity, ocean liners have been many things over their century-long heyday before the advent of mass air travel. At the same time, they were always feasts of design and craftsmanship, and this sumptuous show does full justice to this aspect in particular, with everything from vast golden lacquered panels to gorgeous flapper dresses and impossibly luxurious luggage.

Even allowing for the allure of the subject matter, exhibition designer Casson Mann have pulled out all the stops, particularly in the spectacular room that celebrates the liners’ Art Deco heyday. In here, at the entrance, they’ve simulated part of a swimming pool complete with divers. One wall is taken up with a huge moving image of an ocean liner on the waves, while in the centre, they’ve conjured up the theatre of the ‘grande descente’ to dinner, with multiple images of glamorous passengers making an entrance down the stairs in their finery. There’s footage of on-board activities from swimming to clay pigeon shooting showing everyone having a jolly fine time. Above everything, stretches a vast, starry sky. 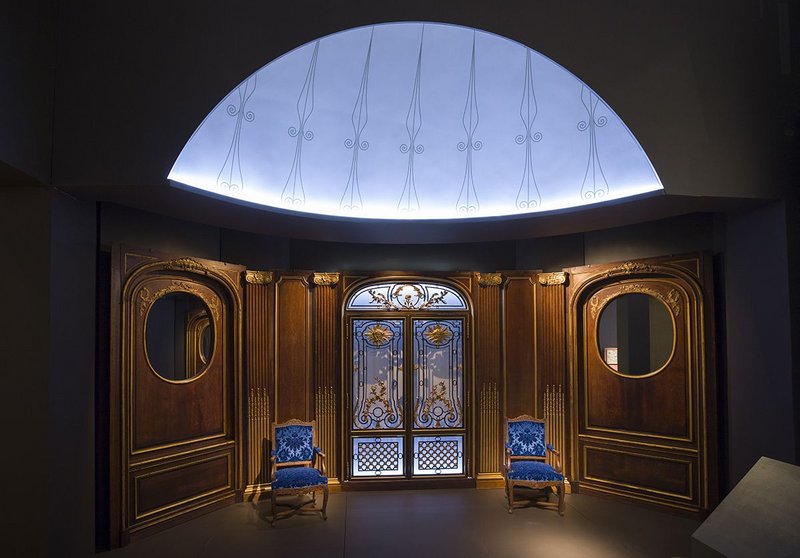 There are many other narratives beyond fun and glamour in this rather splendid exhibition, which roughly spans from 1850-1970. We learn about the role of trans-Atlantic ocean liners in facilitating immigration – in 1913 alone, 1.4million Europeans emigrated to North America – and how a switch of focus to the business and leisure market was fuelled by design-led re-branding.

This extended not just to the liners themselves but to everything that went into promoting them, from stylish posters, literature and advertisements to the design of the shipping office premises themselves. These efforts were highly successful: ‘In a few short years, travel by liners was transformed in the public image from a dirty and dangerous and sickening experience into a glamorous and aspirational activity.’

While ocean liners are most readily associated with the streamlined Art Deco era, this is only part of the design story. The exhibition also explores design from Beaux-Arts through to post-war modern, as liner companies sought to embody the very latest styles in this highly lucrative market.

The section on how these vast vessels were used as tools of state to express national prestige and identity is fascinating. In the 19th and early 20th centuries, lavish historical styles akin to that of grand hotels were popular, and shipowners employed the best architects and designers to make their liners stand out from the competition. Exhibits from the 1912 liner The France show paneled interiors with Sun King motifs that evoke the grandeur of the Louis XIV age. The Ile-de-France of 1927, then the most luxurious liner on the Trans-Atlantic route, is described as a ‘museum of modern French decorative arts’. Even these were out-glitzed by the Normandie, which for four short years was the pinnacle of Art Deco style – as demonstrated by the stunning golden lacquer work panels featured in this exhibition – before being turned into a troop ship in 1939.

Many liners reflected the heritage of the locations on their routes. Britain’s Queen Mary was known as ‘the ship of beautiful woods’ for its exotic marquetry and veneers that were chosen to promote products from the British colonies. The Nazi Cruise cruise ship the Robert Ley of 1939 is rather less grand, promoting a more frugal, modern design that incorporated depictions of figures in folk costumes.

While some ships were carrying immigrants towards the prospect of better lives, liners also reinforced class divisions through their vastly different standards of accommodation. Inevitably, however, it was the luxurious rather than the more basic furniture and fittings that survived, and the focus of the V&A’s opulent exhibition is not about capturing the experience of the poorer passenger. Nonetheless there are some hints of the different passenger experiences in the display of menus. As well as the extensive feasts advertised for the wealthier passenger – and an impressive-sounding menu for dogs travelling on the Normandie – there are rather less appealing menus for third class travellers. On a 1922 menu from the RMS Scytha, the last sustenance of the day was the Dickensian-sounding ‘gruel’.

In the Second World War, many liners were stripped and deployed as troop carriers – on the Queen Mary for example, two-person cabins were converted to hold 20 soldiers. Later, the comparatively restrained modernity of post-war liners is rather welcome after all the glitz of earlier vessels. There are exhibits from the QE2 and others, including work by Edward Bawden, Robert Heritage and Gio Ponti. Although by the 1960s it was possible for some liners to cross the Atlantic in just three and a half days, with air travel on the up, the era of the ocean liner was over.

Ship technology boffins will be drawn to the many models and the displays on engineering. Of more mainstream interest is the influence that liners had on popular culture, shown through the work of filmmakers, artists and architects. Exhibits include Ron Herron of Archigram’s Walking City in New York, which is shown as referencing the idea of a self-sufficient ocean liner. The ending is rather downbeat, with a genuine fragment (apparently the largest) from the Titanic, displayed as if floating.

After its London duration, Ocean Liners: Speed and Style will travel to Scotland as the inaugural exhibition of the V&A’s new Dundee outpost.