To slow climate crisis we must change our assumptions. Anna Liu explains how Flourish takes five outlooks and offers alternative ways to be 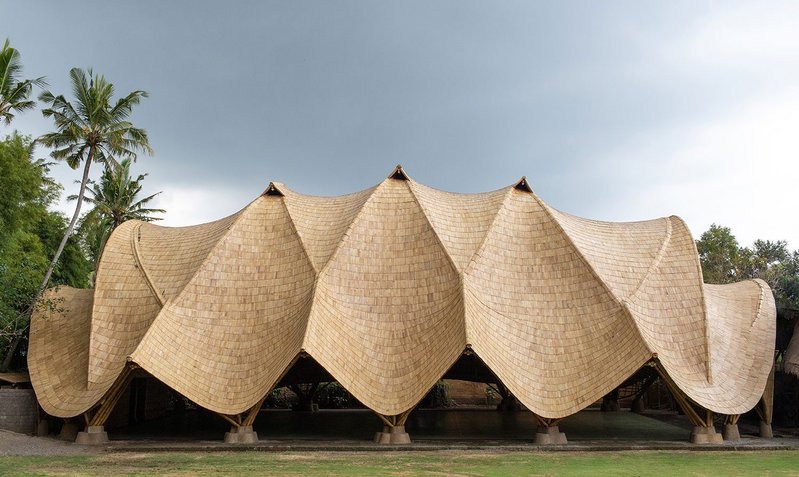 The Arc Building at the Green School, Bali, Indonesia is designed in bamboo with arches spanning up to 19m. Designed by IBUKU in collaboration with Jorg Stamm and Atelier One. Credit: Tommaso Riva

Flourish: Design Paradigms for our Planetary Emergency compels every one of us to act for our planet, at each and every scale, from the individual to the planetary. To do so, we must understand, challenge and change our own current mindset.

Read this book from the beginning to the end, surrender yourself to the inspirational words and deeds from thinkers and doers around the world. Each chapter is anchored with at least two voices, from sociologists, psychologists, linguists, cognitive neuroscientists, physicists, biologists, to anthropologists, artists, architects, historians, engineers, economists and activists.

If you are at all unclear about the facts of the climate challenges, the first chapter outlines them in a clear, succinct way. Unequivocal data, on our recent past and our imminent future, reinforce the authors’ point about the urgency of the present, for example: the past 35 years’ production of more than 50% of our total historical greenhouse gas emissions, the past 50 years’ extinction of two thirds of the non-human animal biomass by humans, the 2050 predicted 140 million climate migrants resulting from the 3ºC temperature rise.

The authors, Sarah Ichioka and Michael Pawlyn, endeavour to dismantle five myths, or paradigms, of our time, layer by layer, scale by scale, to create a new paradigm of action, courage, and hope. Given the urgency of our crisis, they propose we target the two highest leverage points outlined by American environmentalist Donella Meadows’ 12 leverage points. These relate to the most fundamental roots of our systems: to transcend paradigms and cultivate new ones.

The crisis is environmental, humanitarian, planetary, created by our own actions and inactions, built on a mindset with these five entrenched paradigms. These relate to: ourselves, nature, time, other human beings, and growth. Ichioka and Pawlyn demonstrate their sources and how they are now obsolete, damaging, and unfit for purpose. In their place, Ichioka and Pawlyn propose five new paradigms. 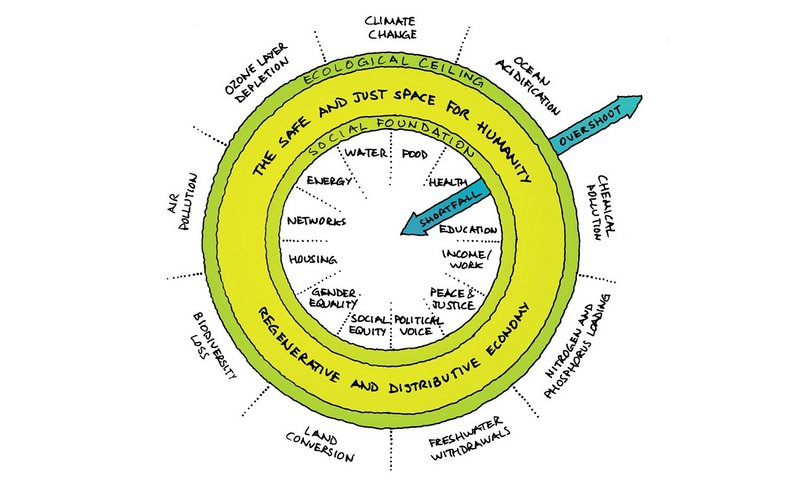 Based on a growing understanding of planetary limits, Doughnut Economics recognises that a number of parts of the world fall below the ‘social foundation’ of basic needs while, in richer parts of the world, people live in a way that breaches the ‘ecological ceiling’. Kate Raworth’s model describes the challenge: to rethink economics so we can bring everyone into the ‘safe and just space for humanity’. Image redrawn from Doughnut Economics, Creative Commons

Myth 1 About ourselves: We are powerless

Human beings should become ‘possibilists’ (Hans Roslings, public health expert). Pessimism, scepticism, conservatism, and cynicism are simply not acceptable options. Human ingenuity has time and again prevailed in the face of the most extreme challenges. The building industry’s reform in the past decades has been woefully slow. As architects we are well-placed to be among the leading possibilists. We are adaptive problem solvers and solution-makers, and possess a diverse set of tools capable of effecting change.

Myth 2 About nature: We are separate and opposite to nature – its conquerors, owners, profiteers, rulers

Human beings are all expressions of nature.  Even the most artificial human endeavour is ‘handiwork just as it is in the handiwork of the spider or the bee.’ (Freya Matthews). As architects we should design and think as nature would. Using biomimicry in design emulates not what nature ‘looks like,’ but ‘nature’s logics’ – its holistic systems.

Myth 3 About time: Time is a commodity, speed is of the essence

Roman Krznaric’s ‘legacy mindset’ requires thinking long term, and being accountable to future generations. Rather than short term gains, consider the ‘big here’ and a ‘long now’. (Brian Eno) Architects must stretch our thinking beyond the lifespan of buildings: compel ourselves, our clients, our team, our contractors to imagine the future of what we build, for hundreds of years to come. In doing so, we shall all become ‘good ancestors’ (Roman Krznaric) to our grandchildren, and our grandchildren’s grandchildren.

Myth 4 About other people: Survival of the fittest, we are all self-interested, competitive with and separate from other human beings

Each of us is integral to the existence of others (Freya Matthews). New species emerge through symbiogenesis (Lynn Margulis, evolutionary biologist), rather than purely Darwinian competitive differentiation. ‘Common welfare’ has long been a ‘pre-condition for one’s ultimate well-being’. (Alexis de Tocqueville, political theorist) Government investment is one example of ‘collective action’, in technology, education, infrastructure. As architects we should become ‘super collaborators’ with engineers and scientists, with the wisdom of vernacular architecture, and with the many initiatives emerging from grass-roots communities.

Myth 5 About growth: Economic and development growth are the priority

Just as an overgrown organism in time debilitates itself, perpetual growth leads to planetary illness. Care should replace growth as the primary aim, ‘nurturing the foundational connections of Society.’ (Kate Raworth). As architects we should commit to circularity, ‘localise production and globalise knowledge.’  We should conceive buildings as a mass of metals, minerals and synthetic materials, alongside other planetary resources, evolving within the limits of their technical and biological cycles. 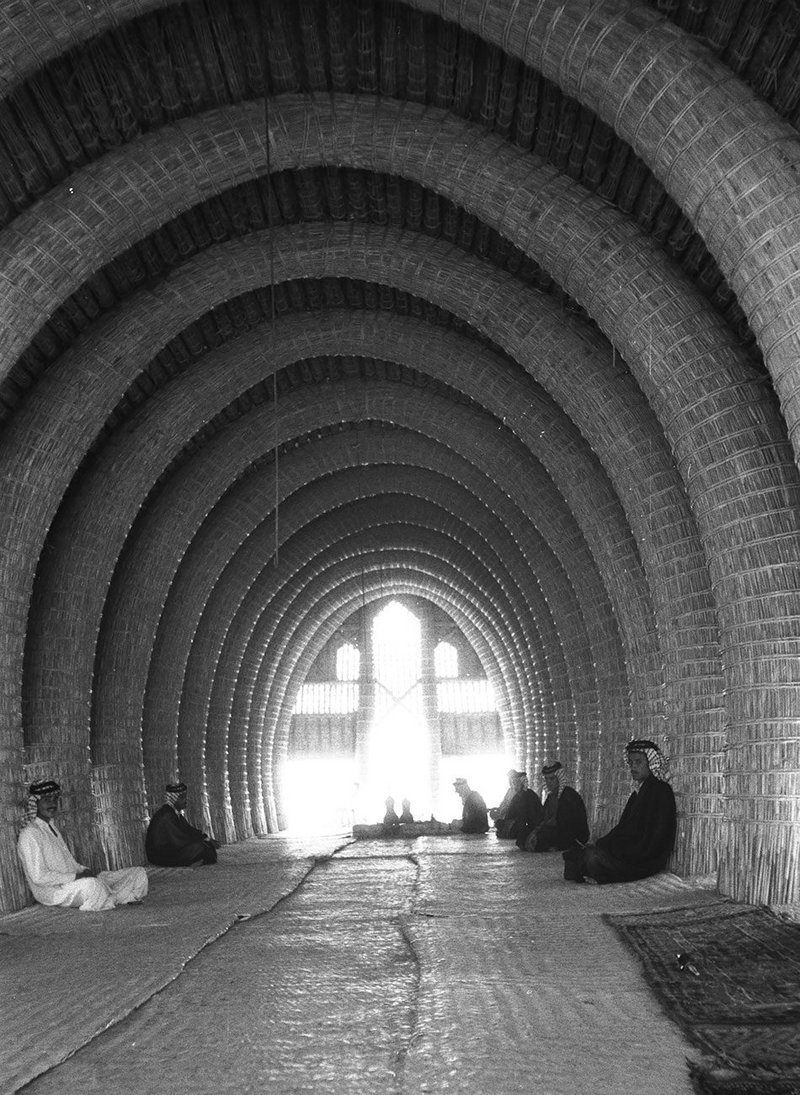 Interior of a ceremonial or guest house designed in reeds by the Marsh Arabs who have lived in Iraqs marshlands for thousands of years. This one was photographed in 1955. Pitt Rivers Museum, University of Oxford, accession number: 2004.130. 23203.1

The Anthropocene, sometimes called ‘Capitalocene,’ is for Glen Albrecht the ‘new abnormal’ in which ‘planetary distress… uncertainty, unpredictability, genuine chaos… have clearly resulted from human dominance of the planet. He ‘wants this period in history to become redundant as soon as possible.’  To varying degrees we have all accepted, passively and complicitly, something that in fact should be seen as an anomaly, rather than an inevitability, in human civilisation.  In thinking this way, we can give ourselves more agency, to catapult ourselves out of this lethargic and unquestioning state, as consumers, architects, global citizens, and become the much-needed ‘possibilists’ in these tumultuous times.

Our current economic, political and societal systems have remained wedded to that which was put in place in a bygone era, one that had only just begun to understand nature. Consumerism and Darwinian free-marketism have been entrenched since. Our present era – digital, post-industrial, post-colonial – has learned invaluable lessons, and now possesses more advanced tools than ever for understanding nature. The newfound insights and tools on nature’s intelligence and intricacies should amplify our responsibility and bolster innovations towards nature-informed, nature-inspired, nature-driven, regenerative architecture.