From the far end of the hall where I entered, I couldn’t quite see, but there was no avoiding the resonant booming of what sounded like Kodo drumming. It turns out all the noise was being created by two window fitters; who, once their drums had made way for the faster bpm of house music, began a curious synchronised choreography in tune with the beats; which, like Vivaldi, consisted of four movements. 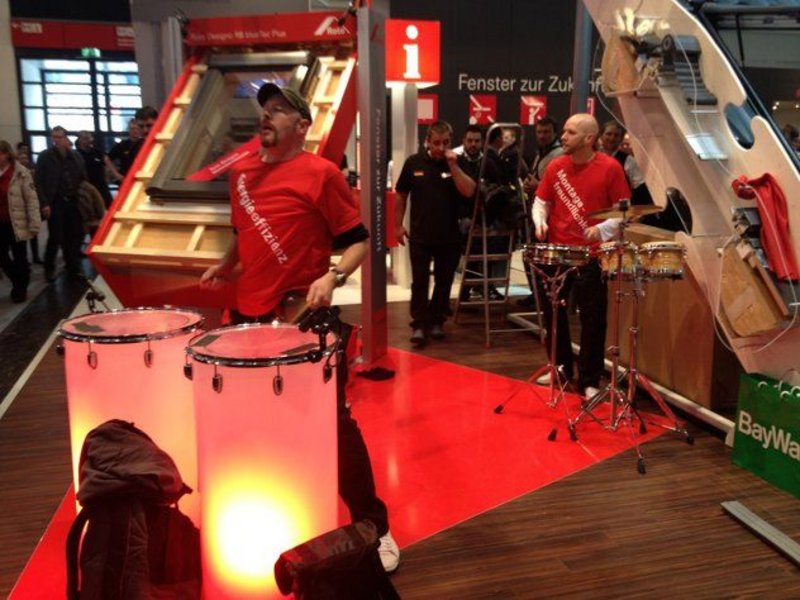 In the first, with cordless drills, they danced a rooflight firmly into its frame. In the second they flashdanced in the flashing. In the third was displayed the mechanised gymnastics of the rooflight itself, and the fourth another drummed crescendo- a paean to the window’s commodity and quality. The show over, they stopped and we all clapped. I’m not at the Stomp, but I could have been. No; that six minute piece of musical theatricality was in fact produced by German rooflight manufacturer Roto, drawing attention to their ‘Sunroof’ product, over the thousands of others at the 2013 BAU event at Munich Messe.

This is the second time I’ve been to BAU and its’ scale has not lost the power to impress. In 16 huge halls and covering over 180,000 sq.m of space, and drawing over a quarter of a million visitors over its five days, the event is one of the largest of its kind in the world. Stands are big- the Schueco one alone’s like wandering around a modernist village- but despite its undoubted size, there is something personable about this show that smaller events simply do not replicate. Part of that could be the all-encompassing nature of BAU- it covers the whole sector. Pass through one hall on decorative wall finishes and you might end up in the heavy duty hand tools section, or bathrooms and sanitaryware leading into façade access equipment. This eclectic approach leads to architects and interior designers brushing shoulders with road maintenance and construction workers- and with all of them straying into each others’ territories here, there’s something charged about it all.

Combine this with the fact that any stand worth its salted pretzel is equipped with a bar, and you’re looking at a heady mix. Yes, in the home of the Oktoberfest, they know how to get punters to not only look but dwell- and that’s beer. This is at times taken to a thrilling extreme. A stand in the construction tools hall; and by ‘stand’, I mean a big bar with a large number of plugged-in power tools around its perimeter, basically comprises operatives drinking, then maybe drilling, sawing and riveting away is a gloriously liberating sight- even as the wood shavings fly past as you walk by. The highly social nature of this gathering means that small German construction firms based in the middle of nowhere come to Munich and basically turn the event into their office jolly. At BAU it is quite common to see teams of skilled workers proudly walking around in their full traditional work gear of cord trousers, waistcoats and red cravattes. At one point I saw one such group at a bar jibing another crew dressed in what looked like formal Tyrolian regional costume. I didn’t understand a word of their banter, but honestly, I could have watched it all day. There is a real sense that people are here to enjoy themselves as well as be sold to.

With exhibitors from over 40 countries, it’s also far from being just a German event. And whilst there’s representations from firms that are also household names in the UK, you’ll also see products and materials that simply haven’t been released here in the UK yet- if at all- which makes it a hotbed of ideas for products and materials. And it all seems to be done on a scale and level of showmanship that, it could be argued, leaves us in the UK trailing. We haven’t had that referendum on splitting from the EU yet, the hotel prices are less than London, a return flight booked early to Munich with carbon offsetting is less than a cross country National Express ticket, and damn it, the beer’s great. I’d say check it out for yourself- just don’t forget your Lederhosen…