Bruno Taut-inspired coloured glass installation will play with your perceptions 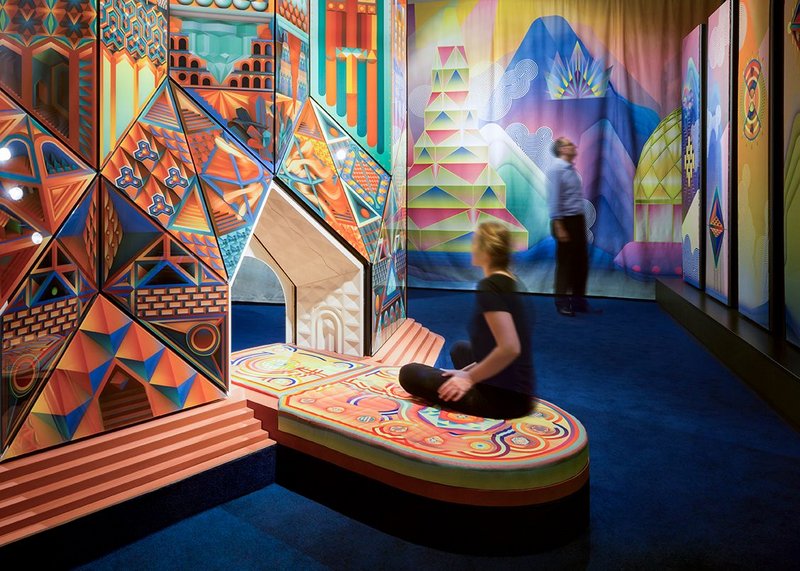 The Glass Chain, a new installation in London by Space Popular, is a feast for the eyes. Designed for Sto Werkstatt’s Clerkenwell showroom, the temporary piece creates a kaleidoscopically coloured glass structure full of rich pattern and trompe-l’oeil effects. It is mesmerizing.

Sto Werkstatt approached Space Popular, a multidisciplinary design and research practice led by architects Lara Lesmes and Fredrik Hellberg, to consider new building design possibilities for its product StoVentec Glass, a rainscreen cladding system with a glass-faced composite panel. The duo, who favour outfits every bit as colourful as their glass creation, teach at the Architectural Association and are interested in exploring visual perception and environmental psychology in architecture.

This is Space Popular’s first built UK project. The architects quickly settled on a concept inspired by The Glass Chain – the series of chain letters initiated by Bruno Taut. These set out utopian visions for fabulous new glass cities and were circulated around a select group of expressionist architects including Hans Scharoun and Walter Gropius. Correspondents envisaged glass as a key architectural material, used in vivid and intricate forms and colours for everything from furniture to crystalline cathedrals on mountaintops.

‘They thought the architecture would be so incredibly overwhelming that it would solve social problems,’ says Hellberg.

Space Popular shares this desire to broaden the way glass is used beyond its customary functional role in buildings. As the project progressed, the practice became interested in exploring how 2D treatment of opaque glass can support a virtual content by creating a perception of multi-dimensionality. This, says Lesmes, broadens the scope of what could be considered an alternative reality.

Working with curator Amy Croft of Sto Werkstatt, the practice created a folded structure of 21 opaque glass panels covered in intricate abstract patterns. The architects made the patterns using 3D computer modelling, working on different panels alongside each other so that they were always aware of the other’s designs. From a 3D image, they produced a flattened, 2D version which was printed onto the panels with ceramic ink using a bespoke printer. The printed colour was then fused with the glass during an enamelling process.

Illustration by Space Popular for the fabric panels at The Glass Chain.

The glass structure sits on a stepped podium on a blue carpet suggestive of water with a patterned seat projecting out from the entrance. On the reverse of the structure, the 23 opaque panels are left white and unembellished in sharp contrast to the splendour of the patterned side. The walls of the surrounding room are hung with designs inspired by Taut’s alpine visions.

In particular it’s the drawings in the Glass Chain letters that have inspired the designs. Each panel is unique and is patterned with various scales of abstract motifs including rusticated stonework, doorways, arches, staircases, pediments and building structure, all designed to draw the eye into the building by giving the illusion of three-dimensionality and questioning perceptions of space.

Once my eyes had recovered from the polychromatic shock, they were drawn to the only dynamic elements in the pattern, the swirling forms flowing in and out of frames above the entrance. This is something of a focal point, highlighted further by a clutch of crystals in the panels above. But there is interest, and conflicts of scale, everywhere, with the heady array of patterning united only by the common colour palette.

‘The panels seek attention equally. The colour application has been designed so that every little bit is screaming for attention,’ says Hellberg. ‘It’s meant to be joyful.’

Space Popular expects viewers to first be drawn to the brightest elements, then the most recognizable, before moving on to the more abstract ones.

‘It should be left to the viewer to make their own associations,’ says Lesmes, who hopes people will experience how architecture can provide an intricate and intense visual experience.

Space Popular and Sto Werkstatt are planning a virtual reality event during London Design Festival in September, where visitors can view the installation with VR headsets to heighten the experience of three-dimensionality.

‘The site of an architectural project is really the mind,’ says Hellberg.