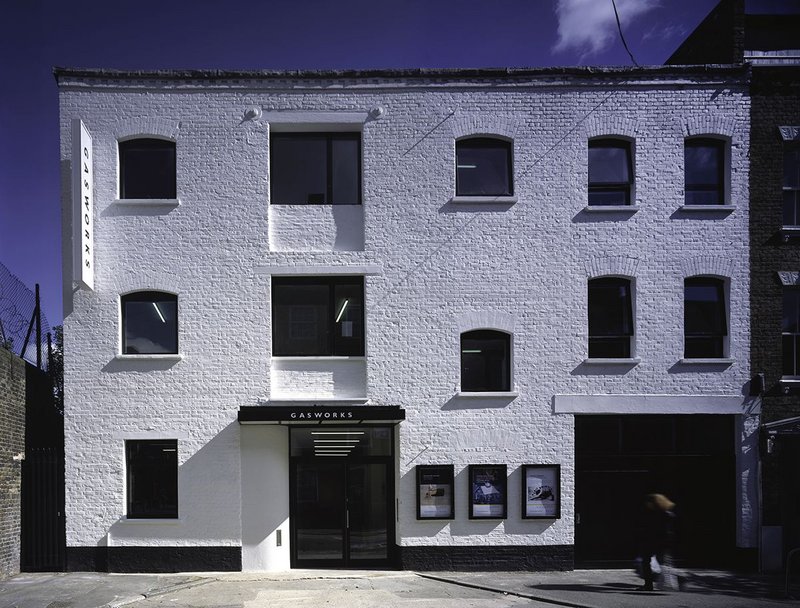 ‘That is Hat Projects’ trademark solution for bins,’ deadpans Hana Loftus as I puzzle over the grand cupboard doors fronting an office on the reordered facade of the Gasworks gallery in Kennington, south London.

It is not a predictable solution for a gallery and artists’ studios, but then this job has been about making a compromised and rather messy building work simply and elegantly. Inside, a clerestory over the bin store admits light into the office but not intrusive views, and below it the white tiled cut away, roofing the store, reflects even more.

This building, only just beyond the range of a cricket ball from the Oval cricket ground, probably started life as a manager’s house and works building for the gasometers next door. For 20 years it has been operating as studios, mixing up young London artists renting relatively inexpensively with artists’ residencies from all over the world and displaying the best of their work in the cramped ground floor.

Its street access was confusing and almost invisible. Now the facade has been clarified and with the single entrance clearly and graphically signposted with two elegant lightboxes, signalling the way to those even at the far end of the street. From the door the gallery is visible past the modestly reworked stair. A slice taken out on the corner of the stair tower gives a glimpse towards the studio-heart of the building – and lets reception staff keep an eye on those ascending.

It was the building’s imminent sale that was the catalyst for Gasworks’ application to the Arts Council for a capital grant for the purchase, with refurbishment thrown in. Before this investment was hard to come by with leaking roofs covered in black plastic and ad hoc additions, like the disabled toilet opening straight off the gallery. Much of the project’s budget went into dealing with these issues but Hat Projects has also brought order to the plan and the spaces with simple detailing, circulation canted, and the underside of the pitched roof exposed to lend height to the top floor studios. It is a pragmatic, calm composition. Including the bins.