Ideas in the Imagine Bath competition to improve the flaws of one of Britian’s most admired cities ranged from sublime to – well, crazy 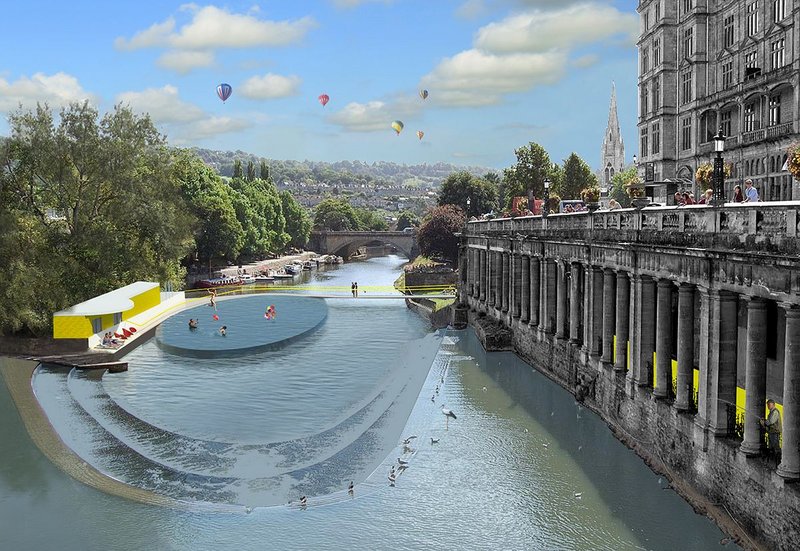 There is a classic picture of Bath, the elegant elliptical cascade of a weir with the windows of Robert Adam’s Pulteney Bridge looking down over the drop. It was the colonnades alongside the weir, reached by following the circuitous, descending Boat Stall Lane, that the people of Bath, its students and architects took over to reimagine the city.

On show were ideas to improve the city – the result of the Imagine Bath competition. The opening party brought together clients, councillors, those ideas and their originators, in the weir vaults which are rarely open to the public. It is an apt time for thinking about the future of Bath, which has recently seen the release of three old major Ministry of Defence sites on its edges, where the 60s huts and temporary buildings are even now being bulldozed for housing. To the north east is Robert Adam's vision of a new Bath of Warminster Road; to the south the 700-house Curo masterplan by HTA Design.

In the city centre the Georgian pastiche SouthGate shopping centre has bedded in, the grain feeding people naturally into the city from bus and train stations and delivering plenty of footfall to its tenants.  But there is still much work to be done along the River Avon, bounding the city’s centre. Subject of a river masterplan by Feilden Clegg Bradley Studio, it is still a corridor of potential. Meanwhile the industrial leftovers at Riverside are being replaced by non-descript blocks, leavened only a little by Alison Brooks' 27 more interesting, articulate homes.

Of course, on a foamboard panel anyone would struggle to encompass these issues. But the river and connectivity emerged as recurrent themes in the 90-plus entries. A vertical studio of first to third years at Bath Spa university delivered a number of heartfelt suggestions of how transport to its south-eastern edge campus might be improved on, over the packed circulating buses that currently define student life with a 40 minute commute. Andrew Nicolson presented a study of many years with a plan to link them into a Bath GreenWay – with the junctions between each existing path thought through and resolved, said the judges in their commendation.

The most eye catching ideas involved better use of the river; the commended entry Avon Ellipse proposed drawing a line to answer and echo that of the weir, with safe bathing held in it. How about using the many litres of warm water expelled from the thermal spa into the river for warm bathing, suggested another highly commended proposal. The craziest idea? To send tourists off on a monorail in a bathtub to explore the ancient underground world.

The contest was set up on the initiative of Chris Mackenzie of Bath-based practice Designscape, who had a hunch that many of those inhabiting Bath from day to day would have a little dream of how they would like to improve it. Along with RIBA South West, which organised the project, he is working to give a longer life to the winning proposals. These displayed a simple array of ideas that might shed a new light on Bath. A New Perspective on Bath by Farrah Morgan, Aissa Diallo, James Wright and Helen Zhang proposed using the city’s hilltop vantage points to set up a series of viewing points or follies. Searchlights and a museum to commemorate the city’s Blitz losses with a new city archive was the suggestion of the most architectural entry – by Mark Wray, Isaac Lim, Jamie Holmes. But the winner, The Waters of Bath by Rob Delius, was most notable for its humble approach to rehydrating the urban fabric,  with a strategy that could be achieved bit by bit with small scale interventions. ‘It should be part of the brief for any development in the city,’ said the judges.