Some kinds of architecture are so familiar, so generic and unchanging that they slip subliminally into our mental urban landscape. The greengrocer’s shop is a perfect example. Its essential components are always the same, just differently arranged each time and with a seeming artlessness that suggests little of interest for architects. 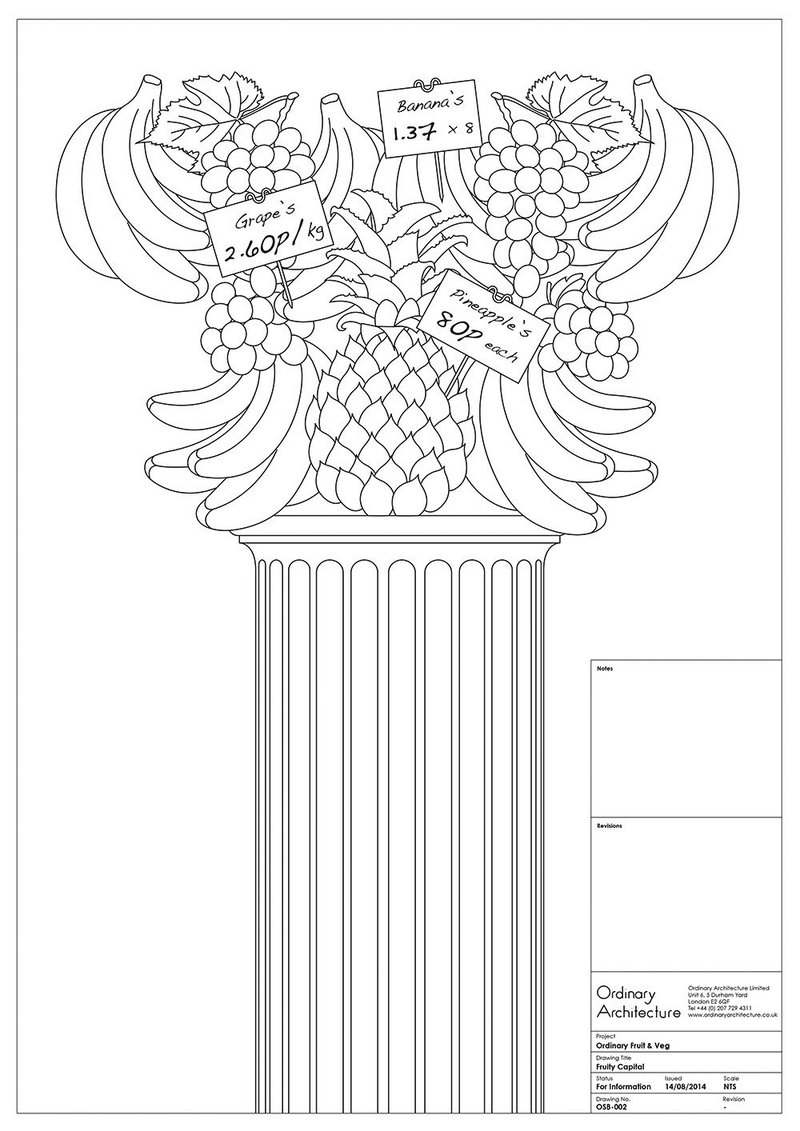 Living version of Corinthian capital. (Apostrophe abuse is a fundamental part of the greengrocer experience.)

The typical greengrocer’s is a shop descended from a market stall with an element of street theatre thrown in.  Reconstructed daily from upturned, stackable crates, it is decorated with abundant amounts of fruit and veg that spill out on to the street, giving mountainous form to the exterior. Bunches of bananas, grapes and pineapples become living versions of petrified Corinthian capitals.

In the midst of this raked facade covered in fake matted grass, there is usually a small island where the grocer resides, strategically positioned so as to be able to grab even the hardest-to-reach peach, and resembling, just for a moment, the god in his own garden of earthly delights.  Mirrors extend the visual boundaries of the space and increase the sense of abundance, suggesting boundless fruit and veg stretching on into infinity.

In a way that might have pleased John Ruskin, the objects on sale here form the structure, architecture and the ornamentation. The ‘shop’ behind is barely noticeable save for the awning sailing overhead, often striped, sometimes plain, perhaps emblazoned with the grocer’s name, always in a serif font.

In a way that might have pleased John Ruskin, the objects on sale here form the structure, architecture and the ornamentation

The Victorians defined the aesthetics of much of our domestic architectural landscape, and with it, our high-street shops too.  Often set into domestic–scale terraces, built for purpose with accommodation above, these familiar shops are highly versatile yet conform to a stable set of rules. Products and proprietors change but the elemental language stays the same.

The demise of this typical high street has been much discussed and lamented of late. Greengrocer’s, like all forms of architecture, are subject to the currents of social, economic and cultural change, and for a long time this has been running in the direction of the out-of-town supermarkets.

Recent years though have seen something of a greengrocer’s renaissance, at least in the more gentrified areas of our cities.  While the nouveau shops undoubtedly feel stagey and forced, with their overpriced ‘artisan’ vegetables and air of nostalgic austerity, the Turkish grocers of Dalston in east London provide an alternative source of affordable fruit and veg for cultures with shopping habits that resist the totalising efforts of supermarkets.

The greengrocer’s ultimate gift is in its generous offering to the pavement.  Though most definitely urban, it still manages to convey an image of the abundant fruits of nature. Even the most traffic-thrummed, tarmacked street can be relieved by the presence of a greengrocer’s.  And its stage set changes constantly.  After all, every tomato is unique, and each sack of spuds presents a form that differs to the last.

So the greengrocer’s artlessness is an illusion. It is actually a sophisticated piece of design.  As an architect, the temptation is always to reinvent, to develop new forms and experiment with new materials. Is this a world that architects should stay away from then, lest they render the countertop into a parametric object from which the apples will inevitably roll off?  Maybe, but an appreciation of the way familiar spaces work involves trying to understand what is successful; what already has a use.  It also requires an engagement with the codes and structures of popular meaning – not as a form of cultural conservatism, but as a starting point for learning from ordinary life.