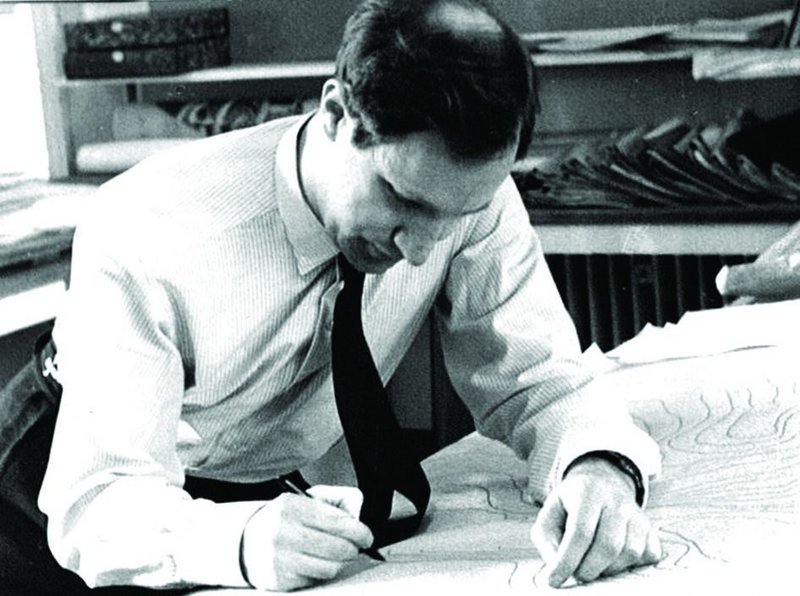 ‘Any fool can come up with a solution; the key is to find an elegant solution.’ This sums up the professional approach of Jack Lynn, one of the defining figures of post-war British architecture, who has died, aged 86.

The youngest of eight children to a mining family in Northumberland, he was born into poverty in the aftermath of the 1926 General Strike. Raised as much by his eldest sister as his parents, in a fervent Methodist home, he developed a lifelong belief in the value of a strong community and close family, and the basic right of working people to work, decent education, housing, and health provision.

Jack studied architecture at King’s College Durham during World War Two. Driven by a desire to be part of the newly-formed NHS, he first worked for the East Anglia Health Board in Cambridge, but Donald Gibson invited him to join Coventry City Council, where he began a career of intense dedication to the design of public housing.

Lewis Womersley asked Jack to form a new team at Sheffield City Council, and was persuaded also to employ Ivor Smith, who Jack knew from Cambridge. The two are credited with the planning, design and vision that led, over a decade, to the construction of Park Hill estate – the largest listed structure in Europe, shortlisted, after its recent reinvention, for the Stirling Prize. Jack believed the post-war reconstruction of working class housing deserved the same care and attention in design, the same elegance, as any grand country house – insisting on the involvement of artists John Forrester and Ben Nicholson in the composition, form and colour of Park Hill.

While in Sheffield, he met and married Mari Prendergast, an Irish nurse from a large family.

When Womersley left Sheffield to open an architectural practice in Manchester, Jack followed but quickly became disenchanted; after 18 months he and Mari and their two young children packed the car and drove north.

In 1963, what had been King’s College Durham was reconstituted to become the University of Newcastle upon Tyne, and he was appointed in 1966 to help with master-planning during a period of intensive expansion. With Donald Kendrick he established Kendrick & Lynn Associates in 1968, which maintained an innovative approach to social, student, and private housing.

He mentored, employed or influenced many of the next generation of architects; he knew Alison and Peter Smithson well and particularly appreciated James Stirling, admiring his skill with mass and form (he was no lover of high-tech architecture or excessive use of glass).

Jack was a valued friend of architect, author and disability rights campaigner Selwyn Goldsmith, whom he had met through Mari’s work with the Disablement Income Group. They developed ground-breaking ideas promoting inclusion, independence and choice, which Jack used in his work for the Calvert Trust at Kielder and for Disability North at the Dene Centre in Newcastle.

Jack and Mari retired in 1988, and in 1993 he re-modelled a pair of houses to form the home where they remained for the rest of their lives. Early in his retirement, Jack returned to his first passion for Greek architecture, researching in huge detail the 5th century BC rebuilding of the Athenian Parthenon and publishing two books. Later, he cared for Mari through her last illness and after her death in 2001, found mutual support and companionship with Fiona Manzeh-Longbone, herself the widow of an architect. Fiona died in September 2012.

From conversion to Roman Catholicism in 1968, he had a solid but argumentative relationship with the church; disagreeing with much of its hierarchy but retaining strong personal faith. He was a committed supporter of the Saint Vincent de Paul Society, and worked at local and national level for the rehabilitation of offenders.  He prepared designs for a number of unbuilt cathedrals, entering the competitions for Coventry and Liverpool Metropolitan cathedrals. The Diocese of Hexham and Newcastle became a regular client of his practice.

Jack Lynn is survived by his children Jon and Inez, and his grand-daughter Nicola.