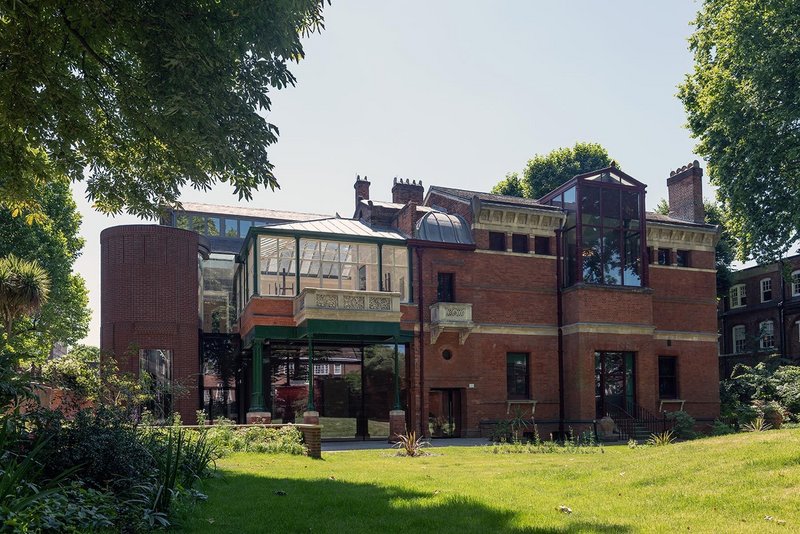 Leighton House exterior, with BDP’s new works to the left alongside the restored Winter Studio. The main studio is to the right. ©RBKC. Image courtesy of Jaron James

Although initially completed in 1866, Leighton House was, notes Robbins, a ‘slowly evolving piece’ with successive additions over a 20-year period as Leighton pioneered the idea of the house as a total work of art. BDP’s interventions mark another chapter, one that in many ways comes full circle by enabling Leighton’s vision for his grade II* listed house to shine again as the artist intended.

The multi-talented, multilinguist Leighton was something of a celebrity in late Victorian society, and was knighted in 1878. When still an unknown, his very first submission to the prestigious RA Summer Exhibition was not only successful but was bought by Queen Victoria on the opening day. His decision to settle in Holland Park seeded a whole enclave of fashionable artists keen to follow suit by building their own studio homes on nearby sites. 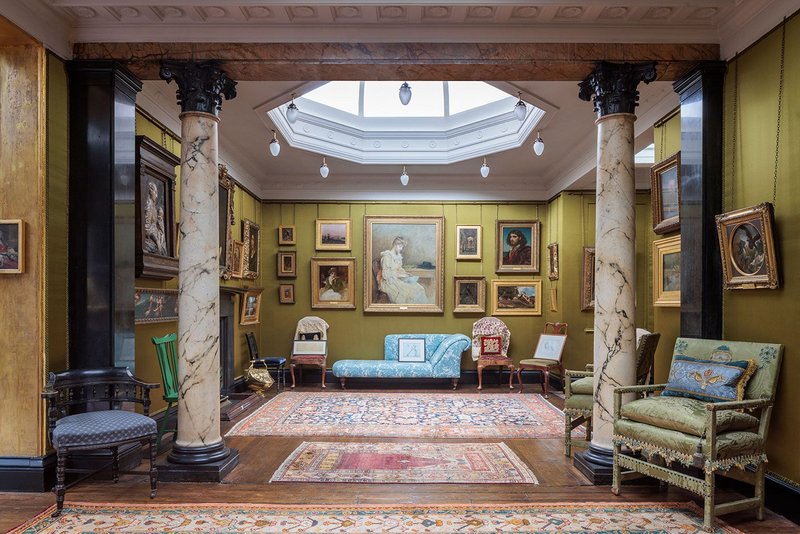 Designed by his friend George Aitchison, the building was initially a relatively modest red brick house and studio before the addition of a slim extension to the east (1869-70), the splendid Arab Hall to the west in 1877-81, inspired by Leighton’s travels to the Middle East, and the 1889-90 Winter Studio, dramatically elevated on columns to the east of the main studio.

Leighton’s last project was the Silk Room, completed shortly before his death. Extensions to the east in the 1920s (the Perrin Wing) and 1955, along with efforts over the years to integrate visitor and storage facilities and house the local children’s library, had somewhat compromised the historic house. In particular, the space beneath the elevated Winter Studio was infilled, bricking in the striking cast-iron supporting columns.

The problematic 20th century additions at the east of the house were therefore a good place for BDP to focus its activities (the heritage interiors had already been restored by Purcell in 2011). Tasked with creating new visitor, storage, exhibition and education facilities, BDP opted to remove the post-war infill, reconfigure the Perrin Wing, and make new additions to the east including extensive basement accommodation. These include an environmentally-controlled gallery for Leighton’s drawings, which would have been impossible to deliver above ground in such a sensitive context. In doing so, the practice has re-established visual connections with the garden, resolved circulation issues by providing a new helical staircase and lift, and taken the pressure off the heritage interiors by removing the burden of visitor facilities. This enabled the reinstatement of the entrance hall in the original house.

‘We wanted to let the house breathe,’ says BDP architect director David Artis, adding that it was important that all post-Leighton additions –- including BDP’s – are clearly perceived as subservient to what was commissioned by the artist.

‘The new pieces don’t shout too much. It’s all about the house,’ he says.

This is clear in the choice of a darker red brick for the new east additions. There was no attempt to replicate the original red brick – to the contrary, BDP wanted its extension to be complementary rather than matching. However, they drew inspiration from the Arab Hall dome for the brick detailing, and from the house’s stunning decorative tiles for the faience detailing.

The visible parts of the extension are generally respectfully unassuming in keeping with the modest first version of Leighton House – the new staircase tower is windowless to maintain the privacy of neighbours, and is conceived on the principal axis of the building as a counterpoint to the studio on the west.

On the inside, however, the top-lit staircase has a pleasing surprise: an 11m-high mural hand painted by Iranian artist Shahrzad Ghaffari, continuing Leighton’s tradition of commissioning artwork for his home. Another nice touch is the handmade furniture in the café and shop with marquetry inspired by a Syrian chest from Leighton’s collection.

The much-messed around with 1869-70 loggia and east wall have been restored with the latter now forming an inside wall to a new garden room café beneath the Winter Studio. Happily, the cast-iron columns below the Winter Studio have been released from their boxed-in captivity and painted green following paint analysis to determine their original colour. The original models’ entrance – kept separate from the main entrance in the interests of decorum – is once again visible.

BDP’s interventions succeed in their tricky dual mission of providing the required new facilities while righting the wrongs done to the house since Leighton’s death, and ensuring that the rich heritage interior remains the primary focus.

Leighton himself, as someone who regularly opened up his home to visitors for carefully choreographed open studio events, would surely have approved of a project that makes it easier to appreciate the splendours of the house he spent so much time and effort creating.

Leighton House and sister museum Sambourne House reopen to the public on October 15.