Let's ditch Homs and build a new one

I was among those who raced to see the aftermath of the bloody conflict in Old Homs after it was declared a ‘safe territory’. However, anyone who lives in Homs knows that this conflict extended much further than Old Homs to take in the whole city.

Although we were living around it day by day, neither I nor anyone else could have imagined the extent of the destruction until we stepped right into it.

Since the war first started, we had discussed the form and shape of the reconstruction process; how it could be done carefully without prejudice to anyone’s surviving property and memories, even if they now exist only in their minds. At our architectural portal, Arabic Gate for Architectural News, we acted instantly and actively to communicate with well-known intellectuals, such as British philosopher Roger Scruton, announcing an initiative with architects to figure out how to reconstruct Homs and other devastated cities in this ancient country.

Through all the controversy and discussions held, I see the solution as being different from what everybody else is considering. People are baffled by how to put right this mass destruction amid the frightening pressure of horrible suffering by millions of refugees and displaced families.

Think of it as you would any case of clinical death when there's absolutely no use in keeping the life-support machines on, and money and effort are wasted

Inhabitants of Syria know that the average Syrian citizen saves money all his life, huffing and puffing to own a decent home. Owning such a home is the critical criterion for proposing marriage, and a very important factor for establishing quality of life among the Syrians.

Those who live in the city know already just how enormous are the unregulated housing areas that have turned into a natural texture of the city. Such areas grew to make up one third of Homs’ inhabited areas, and half the urban areas in the whole country. They have developed with absolutely no government control, stimulated by corruption and real-estate mafia.

My plan for reconstruction is based on observing history, and touching on the desperate need of people to settle down and find a safe place to live. History constantly reminds us of cities abandoned through wars and disasters, leaving their people to build new cities next to the old ones. This solution is based on the simple fact that the cost of fixing the crushed old city is always far higher than building a new one. In most cases this would be more fitting because after destruction, it is not only the cities that change, but the people too. You definitely need new regulations for a new lifestyle.

For instance, the ancient city of Palmyra, administratively affiliated to the province of Homs, is a well-known historic site and, during the Great Roman Empire, was a kingdom in its own right. Tourists used to come and visit from around the world after its ancient people abandoned its ruins and built an adjacent new city in which to live. 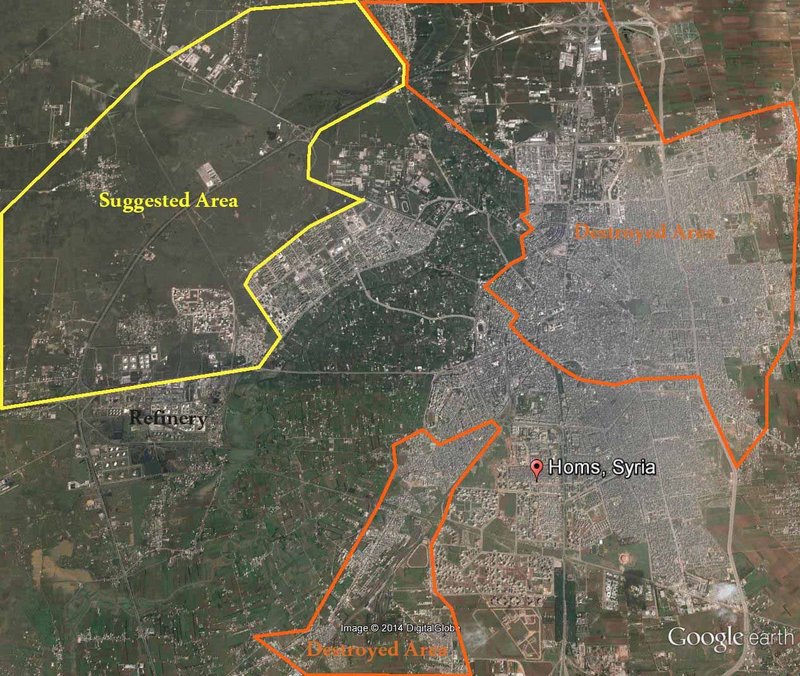 Proposal for a new Homs sited to the west of the war-ravaged city.

Before the war, the city of Homs had many issues to deal with. The most urgent and serious one was the existence of a petrol refinery to the west – the upwind side. This meant the people of Homs suffered from pollution and consequent illnesses. But there was another serious illness that also spread out in the city and the whole country: the administrative corruption that allowed the property speculators to build housing that did not meet the minimum health and safety requirements. As a result, many of the buildings were jammed all over each other in the old city and other neighborhoods, and were deprived of natural sunlight and fresh air. Those speculators also made the city centre unattainable: house prices reached over a million dollars in some parts of the old city.

With so much destruction and the urgent desperate state of people, I see the solution being to evacuate the old city and build an adjacent new city on the far western side of the petrol refinery - designed urbanistically to be the substitute new Homs. There, a new city centre, social activities and housing could all be built to replace the damaged and destroyed; to be like any civilised urban city of the 21st century. Instead of the government granting financial compensation it could not pay, it could instantly grant ownership of new housing in the new city. Those who have larger ownerships would be granted equivalent equities and shares.

The present, surprisingly restrictive building codes (such as a four-floor height limit within the city) could be changed where appropriate in the new Homs to encourage private-sector investment.

Of course, such a solution could only be implemented in the destroyed areas; the inhabited ones would stay the same. These are already close and could be connected to the new site. This plan is helped by the government’s ownership of the required site – in fact, prior to the conflict, urban development of that same site was suggested as a new expansion of the city of Homs. But in that proposal the new development would not have been connected to the current city, with only scattered building in between.

As for the destiny of the old city, I envisage the ancient part being transformed into traditional markets and hotels. The largest part could be given over to public parks and museums, the element that was totally absent and missed in Homs. There, original owners could own shares in the investments-to-be. Absolute assurance should be given to keeping, saving and restoring the old and ancient buildings, especially the religious ones such as Khaled Ibn Alwalid mosque and St Mary church, to name but of a few of the many examples.

In other words, we would create a cultural, educational and entertaining life that could keep the blood pumping in the veins of that old part and not turn it into ghost town – all in a modern, urban vision that preserved the traditional value of the ancient buildings, removed the destroyed housing, kept the traditional landmarks, and revived them through follow-on institutions and urban green landscape.

This solution would not only solve the urgent crisis of housing the displaced inhabitants who have become destitute, it would rapidly provide a suitable standard housing type for a very urgent situation. In addition, it would solve the long-pressing pollution problem, while, most importantly, providing the required investment to create what Homs needed in the first place to be alive.

I realise the radical nature of my suggestion and what a shock it would be for many. However, with a little bit of calmness and thinking, its logic becomes clear. Think of it as you would any case of clinical death when there's absolutely no use in keeping the life-support machines on, and money and effort are wasted. Facing the bitterness of reality is the perfect way to treat it. Trying to pump life into a dead body instead of picking up the life just next to it is totally in vain. So, I ask, isn't it more rational, more appropriate to declare the death of Old Homs and look for the birth of New Homs?

Ghassan Jansiz is an architect in Homs and the founder CEO of Arabic Gate for Architectural News.

Translated by Marwa al-Sabouni and edited by Hugh Pearman