With the usual June event postponed because of the pandemic, an online substitute promises a stimulating if very different experience 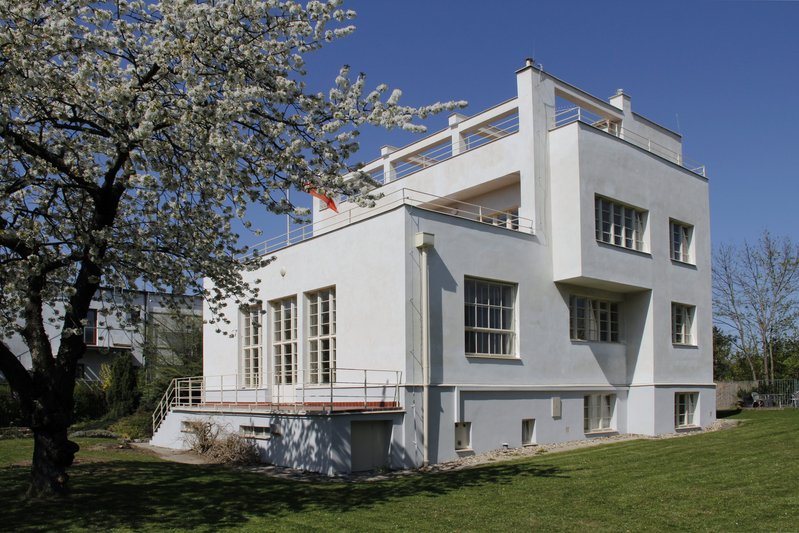 There will be a live streamed tour of Adolf Loos’ Villa Winternitz. Credit: David Cysar

How can you have an architecture festival during (semi) lockdown conditions?

The London Festival of Architecture is having a good go with its swiftly put together LFA Digital, an online event that runs throughout June following the deferment of its regular programme until later in the year due to Covid-19.

It’s certainly a challenge. The LFA experience has always been about a very physical engagement with the urban fabric, tracking down a happening that might take you to a previously unexplored part of the city, or enjoying some of the many pop-up pavilions and structures amid a busy throng of fellow festivalgoers.

While LFA Digital is a very different, and by necessity mainly home-based festival, it retains a lively eclecticism in its 120-strong programme of events. One advantage of the new circumstances is that there is now much more scope to look beyond the capital.

‘The festival goes beyond London and internationally, both in terms of the audience and events organisers – you don’t have to be London-based to take part,’ says LFA head of programme Rosa Rogina.

The international element includes events relating to reconstruction in the Syrian city of Aleppo and a talk by Camilla van Deurs, Copenhagen’s chief city architect, on the impact of the pandemic on urban space. Guided virtual tours of buildings include Adolf Loos’s Villa Winternitz in Prague and a number of brutalist structures in Tel Aviv.

This year’s theme of power comes through strongly. Truth to Power Café is a story-telling platform inviting participants to consider who has power over them and what they’d like to say to them in response.  For 30 Objects in 30 Days, a range of London architects, curators, artists, developers, politicians and educators are invited to talk about an object relating to architecture and power that means something to them.

The result is a diverse selection, from Wren’s Temple Bar monument marking the boundary between the cities of London and Westminster (Peter Murray) to The Education Act of 1962 (Mary Duggan), a hand pollinator from China (Jeremy Till) and the Black Females in Architecture Network (Neba Sere).

As well as the usual collection of light-hearted offerings such as the Great LFA Pub Quiz and an online Architecture Bake Off, several of the events tackle sustainability. These include Hawkins\Brown’s panel event Whole Life Design: a blueprint for a sustainable post-pandemic future, and FCB Studio’s Carbon Counts interactive online exhibition.

Below, we pick out a few other highlights. 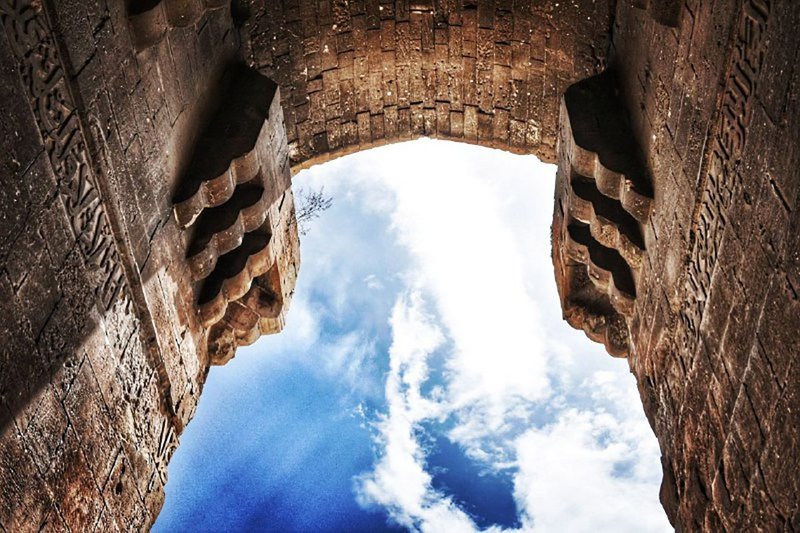 We’ve all seen news images of the destruction wreaked on the Syrian city of Aleppo by the recent civil war. These two events are a chance to explore some of the surviving architectural heritage in the ancient part of the city – a UNESCO World Heritage Site – and also hear from young architects who trained in Aleppo about the challenges of reconstructing the city.

Live from Aleppo is hosted by Muhammad Achour, who grew up in Aleppo and taught in the architecture school before relocating to Dublin where he founded Places of ARcture, a group using art and architecture to engage with young people in local communities and refugee camps. For two consecutive days he will host an event with live-streamed tours by local architects of key Aleppo sites. These include the Bab Antakya, one of the gates to the ancient citadel, and one of the extensive covered souks.

The tours will be followed by Q&As. Achour says the idea is to explore the cultural and human stories beyond the architecture.

'I want the audience to see not just the sites of destruction that are on the news, but the unique architecture that’s still there. We’ll be talking about the history of places and the connection between them and the people of the city,’ he says.

The events will also consider the challenges of the restoration, which is ongoing.

The events are also a chance to hear from some of the architects who somehow managed to complete their training during the conflict. They will screen films they have made about their hopes for reconstruction and take part in a Q&A chaired by Salah Haj Ismail, a former professor at Aleppo University.

‘They are a crop of young Syrian architects who studied architecture during the war, which wasn’t easy – it was hard to find resources like electricity, printing and internet,’ said Achour. ‘But they kept struggling and finished their architectural studies so that they could start on their dream of planning how to rebuild Aleppo.’

Log-in details can be found via the LFA website above. 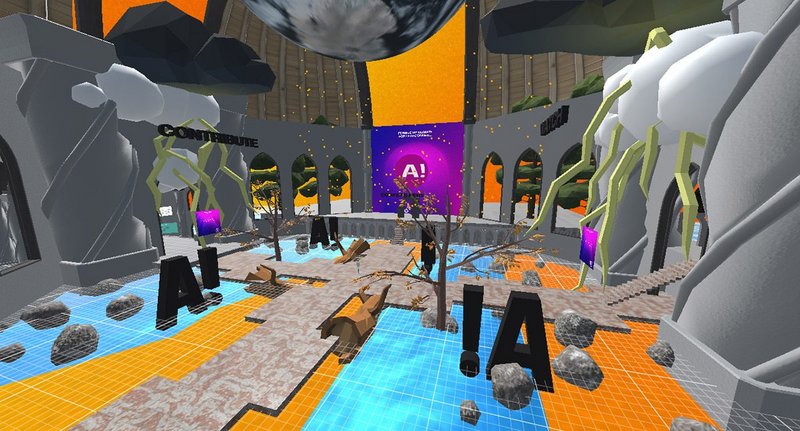 Forgive me climate for I have sinned... there can’t be many architects who, however principled and good their intentions, don’t have a few transgressions to confess when it comes to sustainability. Perhaps it’s failing to persuade a client that retrofit would be better than a more straightforward, but carbon-heavy new build. Or settling for easy and cheap tospecify products from overseas rather than diligently tracking down locally produced materials? Or maybe it’s simply loving concrete too much.

Now – or at least during LFA Digital – there is a place where architects can go to confess. For the event, ACAN (Architects Climate Action Network) has developed its previously trialled physical confession box concept into an online virtual reality booth. The setting resembles a post-apocalypse cathedral, with an angry red sky and flooded walkways, although ACAN points out that the inclusion of green trees is a sign of hope. Confessors cross the space and make their way up to the stage/altar, where they can make their anonymous confession in writing.

These will be collated each day by ACAN.  There are also plans for a ‘Sunday service’ event within the space.

‘The booth will expose how architects can be in contradictory situations as they go about their practice,’ says ACAN’s Jack Taylor, who led work on the Architects Admit project.

Participants can also move to other parts of the building to access a video of an ACAN meeting. The network is keen to take advantage of LFA Digital to spread the word, and to further use online platforms to reach out to people in other cities and countries.

‘It’s a fine balance between a serious topic and creating something that’s quite fun for people to engage with,’ says ACAN’s Bobby Jewell. 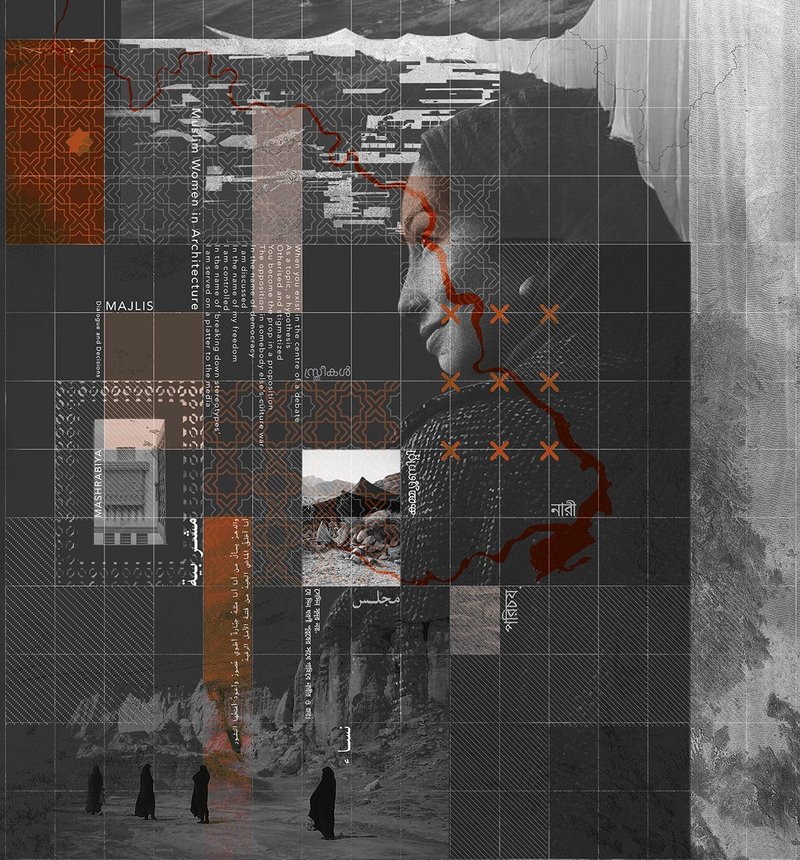 LFA Digital sees the official launch of the new network Muslim Women in Architecture. The organisation was set up by Rim Kalsoum, Tahin Khan and Zahra Mansoor, who met while studying at the University of Westminster.

‘We always felt that there was an under-representation of women in architecture of our backgrounds. We never had that network of women who look like us who we could look up to and reach out to,’ says Kalsoum, who is a Part II architectural assistant at Golzari NG Architects. ‘I personally knew only two Muslim women architects, one of whom was my tutor, Yara Sharif.’

The network hopes to reach out to girls who are interested in studying architecture as well as to women already in architecture schools or in practice, and to understand how certain cultural and societal factors can hinder the progress of Muslim women in architecture.

‘There can be cultural expectations that marriage and family are the only route for Muslim women once they hit a certain age, however our Islamic history teaches us otherwise’ says Khan, a Part II architectural assistant at David Ogunmuyiwa’s practice ArchitectureDoingPlace. ‘There is a rich history of empowered Muslim women, we just never hear of them as they were almost always underrepresented. We don't want this to become an endless cycle. By starting this initiative, Muslim women in architecture can be celebrated for what they are doing in the built environment.'

The network plans a series of weekly online ‘majlis’ – an Arabic and Persian term for assembly – plus lectures and an online exhibition of Muslim women who have succeeded in architecture. The majlis will offer a ‘safe space’ where participants can share their narratives and talk about the aims and their experiences in architecture, including any struggles that they may have had.

Over the years, Khan has been told several times by different people that wearing her headscarf would hold her back. ‘I want to set an example that I can wear hijab and still achieve success,’ she says.

The trio decided to set up the network after organising successful MegaCrit and MegaParty events as part of the Westminster Architecture Society last year. Zahra Mansoor is currently working as a Part 1 architectural assistant in the UAE and will be building the MWA network both there and in India, where she was born.

‘We want to encourage women and girls with a Muslim background to pursue their dreams and not let anything stand in their way,’ says Kalsoum.

As part of LFA the RIBA is hosting an RIBA + VITRA talk with Atelier Deshaus on 29 June. The event will be live-streamed from Shanghai with Liu Yichun, practice principle and feature highlights from the practice’s last 20 years designing iconic educational, cultural and domestic buildings, including the Long Museum (2015) in Shanghai’s West Bund. Find out more and buy tickets here.