Lubaina Himid’s lively paintings explore the effect of architecture on the body, inviting the viewer to interpret and consider the different understandings their stories seem to offer 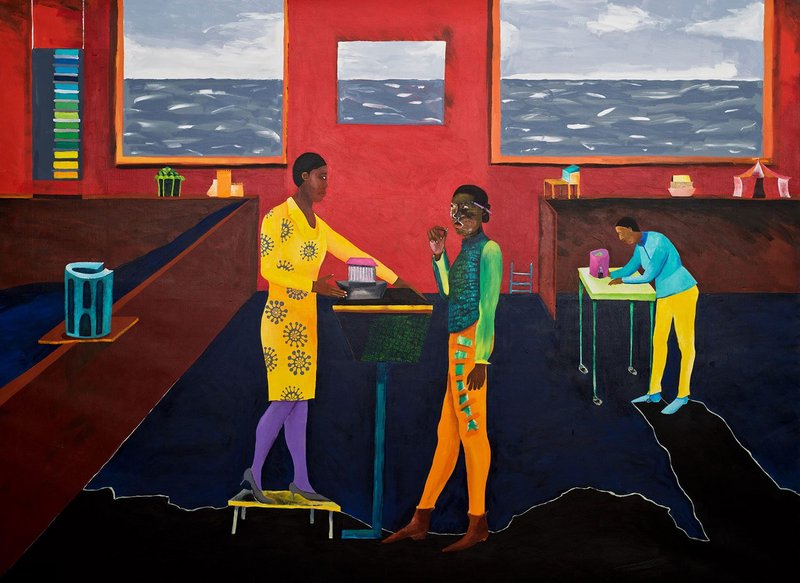 ‘We live in clothes, we live in buildings – do they fit us? asks Lubaina Himid in a wall slogan near the start of her new exhibition at the Tate Modern.

Textiles, architecture and their relationship to the body are some of the persistent themes in this thought-provoking show from the 2017 Turner Prize winner. Born in Zanzibar, she came to England as a child and is perhaps best known for her vibrant paintings that celebrate black creativity and people of the African diaspora.

Himid has been exploring buildings and architecture as part of her work since the 1990s, in paintings that question what kind of buildings women want. In doing so, these consider issues of autonomy in how we all choose to shape our environments and live our lives. Several of these works are in the exhibition’s first main space, which has a mainly architectural theme. These include Country House and East Wing West Wing (1997-18), which both have curvaceous, sheltering forms in intense bold colours.

A more recent work, Three Architects (2019), is on the face of it a depiction of a design studio. In this, two of the protagonists are discussing an architectural model, with one elevated on a step to give a sense of authority, while a third is working away quietly on her own. As in many of Himid’s paintings, we are invited to consider the power dynamics going on, and wonder what happens next. Rather than a sense of harmonious collaboration, it is, as assistant curator Amrita Dhallu, puts it ‘women strategising but not necessary agreeing on the same strategy’.

Himid explored similar territory in The Operating Table (2017-18), where three women, presumably designers, discuss what looks like a masterplan for a building project. One has a dice in her hand, suggesting a less than methodical approach to the project under discussion.  Similar territory is explored in the Six Tailors (2019). In both, Himid is questioning whether what surrounds us – whether built structures or clothes - are tailored to our needs.

This first gallery also contains elements of Himid’s 2010 installation Jelly Mould Pavilions for Liverpool, which tackles the nature of public monuments. Struck by the lack of monuments that reflected the continuing contribution of the African diaspora to the city, she imagined entries in a fictional architectural competition with entrants from 30 African countries. In a twist, these vividly-decorated maquettes take the form of repurposed ceramic Victorian jelly moulds, a reference to the sugar that was so central to the slavery trade, but also an opportunity to rethink what an architecture of pleasure and celebration might look like in the city. In this way, says Dhallu, they can become ‘beacons of hope’ in the landscape.

Embedded in the gallery wall are nine works on metal plates, Metal Handkerchiefs (2019), depicting tools such as saws and screwdrivers along with slogans that while on the one hand seem relevant to construction, could equally apply to life in general: ‘Ensure Sufficient Space’, ‘Give Warning of Undue Strains’ and ‘Keep Moving Parts Lubricated’.

The sea, and the journeys people make on it, is perhaps the strongest theme. Several paintings show houses empty of their inhabitants, sometimes in desolate settings with an inhospitable-looking sea, sometimes combined with testimonies of people’s journeys. In Old Boat New Money, a series of long planks leaning against the wall with a sea soundscape conjures up the idea of travelling on the ocean. Paintings from the Le Rodeur series (2016-18) were inspired by the story of slaves being thrown overboard in response to an illness in the crew, but tackle this grim subject in an unexpected and hard-to-fathom way.

There are many paintings with small groups of young men often awkwardly interacting, inviting the viewer to speculate on what’s going on. Other portraits are incorporated into vintage wooden furniture. The show also includes the early installation work A Fashionable Marriage (1984) a pastiche of William Hogarth’s Marriage A-La-Mode. A comment on power structures in the art world, Himid places herself at the centre of the tableau in the role of the black servant.

Often heavy subjects are enlivened by the vivid colours and patterns, and by moments of empowerment and exuberance, most notably in Freedom and Change (1984), in which two black women run forward hand-in-hand as if liberated, their images created on fabric which is suspended like a sail.

This often uplifting exhibition keeps the viewer thinking about meaning – everything is nuanced and open to interpretation. And while the exhibition also includes numerous sound pieces and the less engaging new installation work Do You Want An Easy Life, it’s the vibrancy of the paintings and their enigmatic subjects that lives on in the memory.