Pleasing enough to be a compositional element in a facade, the ancient Diocletian window’s high light intake has ensured its longevity

Derived from the Baths of Diocletian in Rome 306AD – the only Roman baths to survive intact from antiquity – Diocletian or Thermal windows (known as ‘lunettes’ when missing the characteristic pair of mullions) are semi-circular openings formed within the intersection of the sides of a vault and its enclosing wall. Simultaneously celebrating the pure geometry of the internal span as well as acting as a distinct compositional element on the facade, they maximise the intake of light by removing all unnecessary material in a capacious but delimited classical equivalent of the gothic window. The form has found continuous use in western architecture since Michelangelo’s remodelling of the Frigidarium of the Baths of Diocletian into the Basilica of Santa Maria degli Angeli in 1561-1564; though, as we see below, other architects – notably Palladio – were starting to use the form at this time. Retained on the one hand as an architectural signifier of continuity within certain tectonic traditions, and on the other as a practical solution that remains relevant for lighting large structures, Diocletian windows and lunettes, in all shapes and sizes, have a long and illustrious architectural lineage. 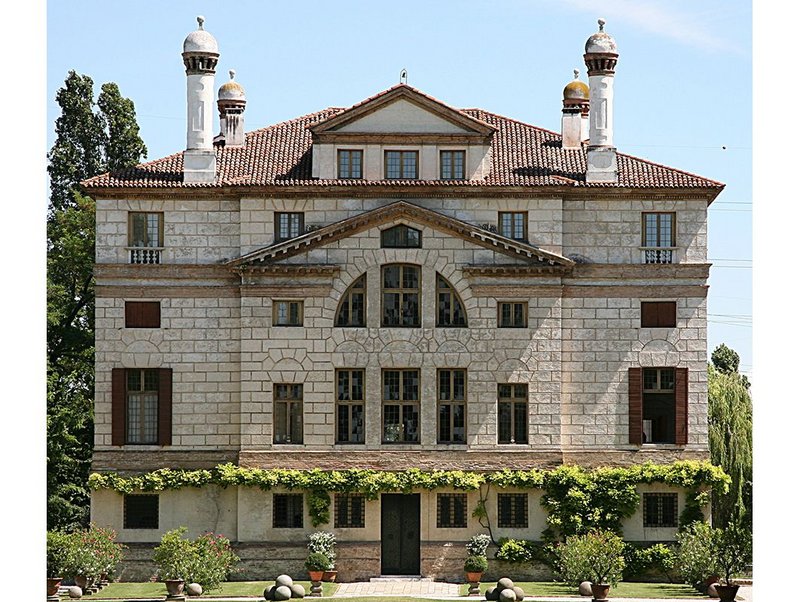 Together with Santa Maria degli Angeli, the southern facade of the Malcontenta marked the full return of this window type. In characteristically unorthodox, re-combinatory fashion, instead of being a subsidiary device for illuminating an interior, Palladio made the Diocletian window the focus of his entire composition, punching it through the villa’s pediment and framing it with a lively staccato of rustication. The window, and its three subordinates below, are used to flood the cruciform hall inside with southern light. 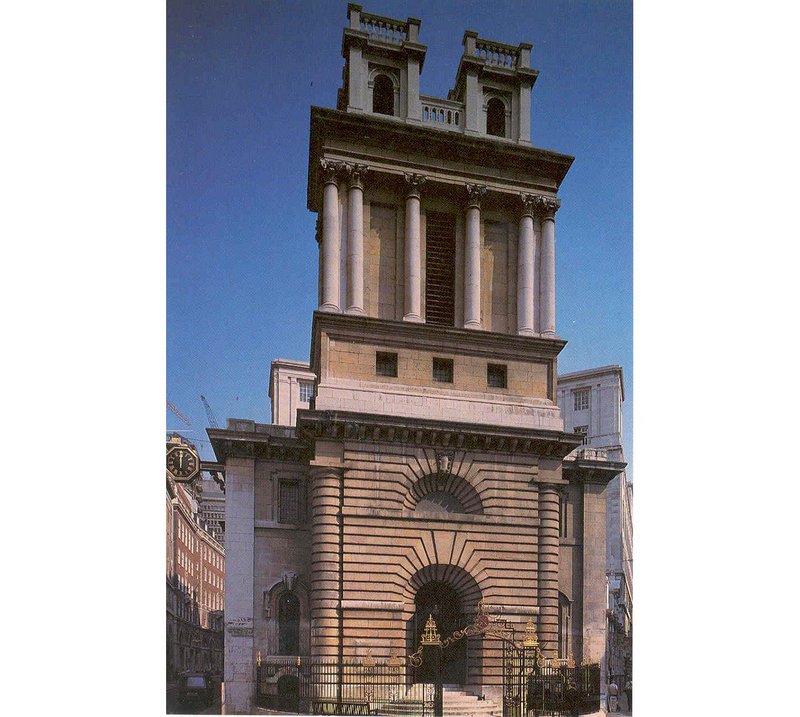 Again used as a singular central feature in an important façade, the west lunette of St Mary Woolnoth rather counter-intuitively lights a small parish room, its form dramatically emphasised by the use of resolute, channelled rustication and a deeply concave surround. On the interior, however, he used the lunette as the principal form of lighting; the site of the church, surrounded by busy streets, was particularly noisy, so conventional window openings were largely rejected in favour of four vast lunettes set on each side of a central clerestory. 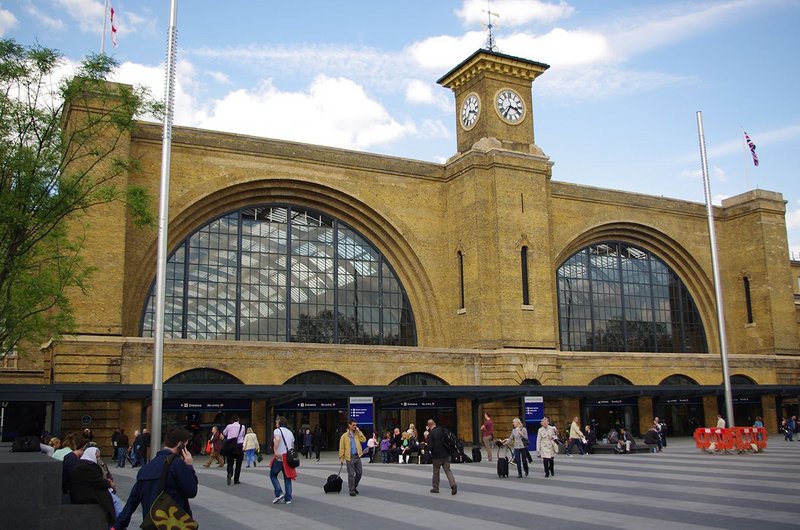 Recently re-revealed in all its Spartan glory after the removal of decades of accretions by successive railway companies, Cubitt’s frontage is probably the most eloquent resolution of the architectural difficulty in relating a station’s facade to the huge train sheds it both covers and is meant to signify. It is a remarkable fusion of structural bravura, aesthetic effect and architectural allusion. The span of the sheds is directly picked up in the facade as two vast lunettes, within which the steel frames are seen dramatically marching away in extreme perspective, while to the exterior they are buttressed by three solid piers and surrounded by blank brick walls with only a minimal cornice line above. The cumulative effect of Cubitt’s restrained use of ornament and of proportions taken directly from the sheds, as well as emphasising only the largest architectural elements, is of a building that embodies the potential nobility of infrastructure. It is as if, instead of a temple or even a bath, a section of viaduct had been taken as the worthy architectural precedent around which to orchestrate a grand urban statement. 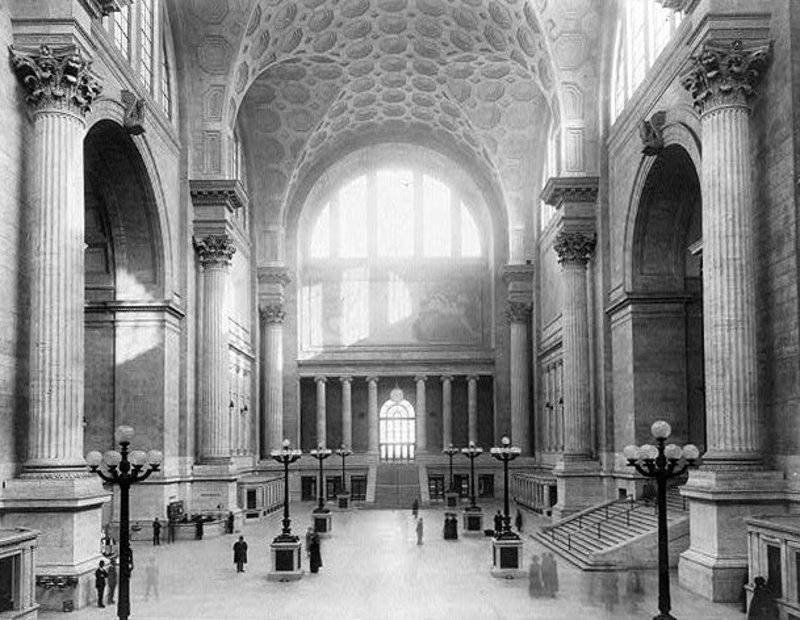 Reaching the size of the nave of St Peter’s in Rome, the old Penn Station in New York saw an attempt to revive and reconfigure the grandeur of Roman bath architecture as a suitable prototype for the complexities of an industrial-era transport interchange and terminus. The waiting room of the station was a discrete volume within a collage of sequentially-ordered spaces; with its Diocletian windows, vaults and giant Corinthian order, it was an attempt at reconstructing the interiors of the Baths of Caracalla, at a larger scale, in steel and suspended plaster. 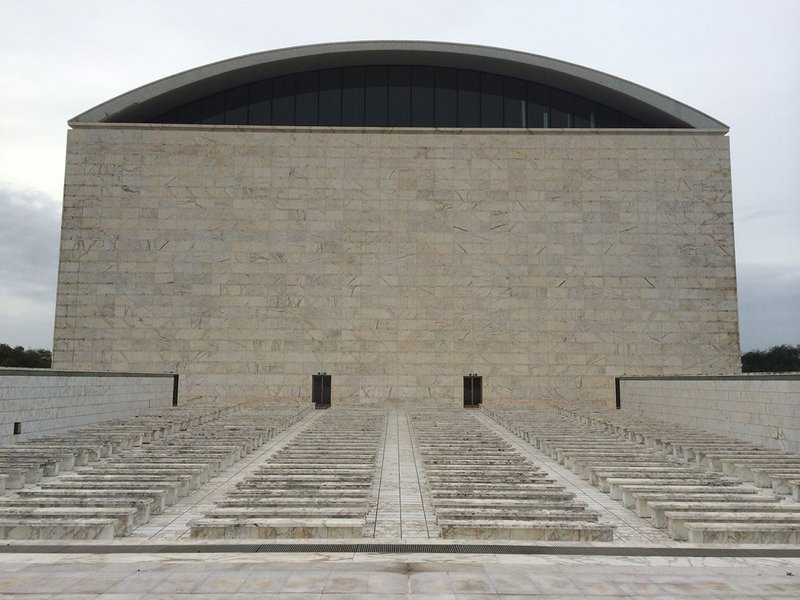 Awarded to Adalberto Libera, the Congressi project involved years of tense negotiation and compromise between Marcello Piacentini, the classicizing architect-in-chief of the EUR district, and Libera, a committed rationalist with quite differing views on architecture. The rear (east) facade of retained Libera’s sweeping glazed cantilevered porch, while the main (west) front was packed with columns to match the emerging context as defined by Piacentini. The latter also stipulated the placement of a cubic hall in the centre of Libera’s previously horizontal design to provide a suitable termination to the street whose other end is monumentally concluded by the Palazzo della Civiltà Italiana (the square Colosseum). Libera topped the cube with a shallow vault that sits above the perfect cube, almost floating on a set of squashed lunettes that nearly meet at their edges. This presages Louis Khan’s more complex version in the Assembly Hall at Dhaka by some years. The sum of compromises and years of frustration on the part of Libera have left us with one of the strangest but most enduring combinations of the otherwise opposing pursuits of modernity and continuity. 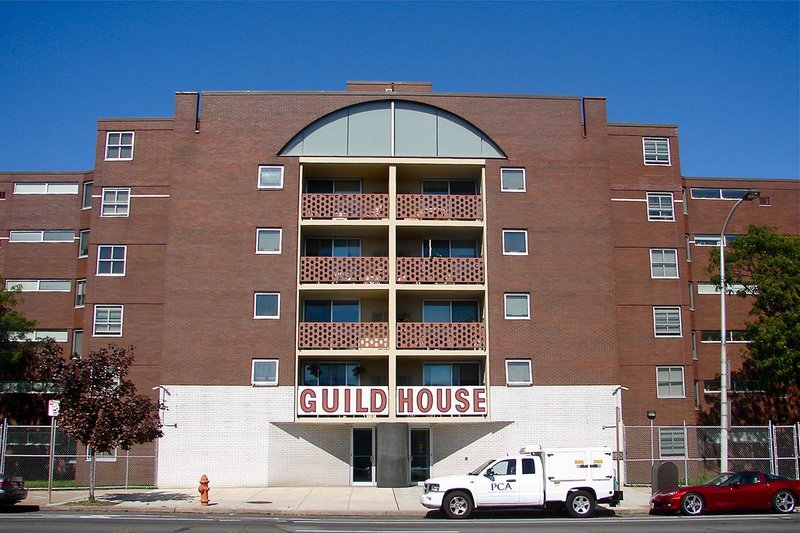 Guild House, Philadelphia; Venturi and Rauch with Cope and Lippincott, 1960-3

A key project that took centre stage in the architectural revival of historically-rooted forms, Venturi’s Guild House deploys a Diocletian window as the apogee of a facade that is at once monumental and banal in its orchestration of otherwise standard elements. Thinness as opposed to implied depth – a key rhetorical tool in Venturi’s formal approach – is manifest here in the cognitive opposition between the unexpectedly smooth surface of the large pane of glass, broken only by a thin mullion at its centre, and the large columns immediately behind in precisely the location where one would expect the mullions of a Diocletian window to be. Here the quasi mullions are rendered immaterial, half obscured by reflections of the passing sky. 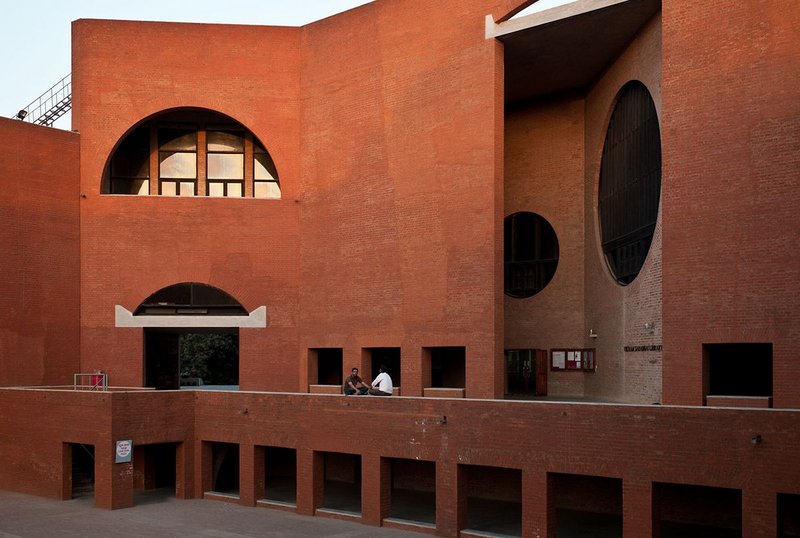 Presaged by Piranesi’s remarkable analytic section of the ancient Ponte dei Quatro Capi, Kahn’s employment of the arch and the full radius opening lent an aspect of modernity and abstraction to his use of historical forms at the Institute of Management in Ahmedabad, a veritable manifesto in the effective use of brick and the arched opening. A master of optical manipulation, Kahn’s central focus within the asymmetric facade pictured here is a semi-circular perforation of an exterior wall, an interstitial void, and a rectangular window with mullions; cleverly, the viewer reads these features, in combination, as a perfect Diocletian window. Appropriately for this article, Kahn’s design also makes extensive use of lunettes.