Symbols of power, places of delight, monuments to ambition – there's always a reason to build a tower

Ostensibly built for practical purposes – the ringing of bells or the call of the Muezzin, or as a place of final retreat and lookout – towers have always been loaded with meaning and value far beyond their functional justification. As embodiments of height, which is perhaps the most instantly recognisable and quantifiable metric of success in the built environment, towers have always been symbols of achievement, easily judged one against the other not in terms of quality but in the unarguable language of dimensions. What counts is the simple number of brick or stone courses that man has raised one above the other in any one given location, in defiance of gravity.

They are also symbols of folly, of man’s pride in believing he can overcome nature, a pursuit doomed to tragedy. This is, of course, exemplified by the story of the construction of the Tower of Babel, a tower so high that it was to achieve the impossible aim of all towers: the joining of the heavens with the earth. This act was so contrary to God and to nature that humanity was broken into warring groups, each with a different language, so that we might never attempt such rashness again.

Whether standing alone in singular repose, clustered together in competition, or towering over the buildings to which they were added, towers of great proportions are –and always have been – functionally unnecessary. Yet they remain emotive and vital markers of our ambition, confidence and wealth in civic, domestic and religious life. 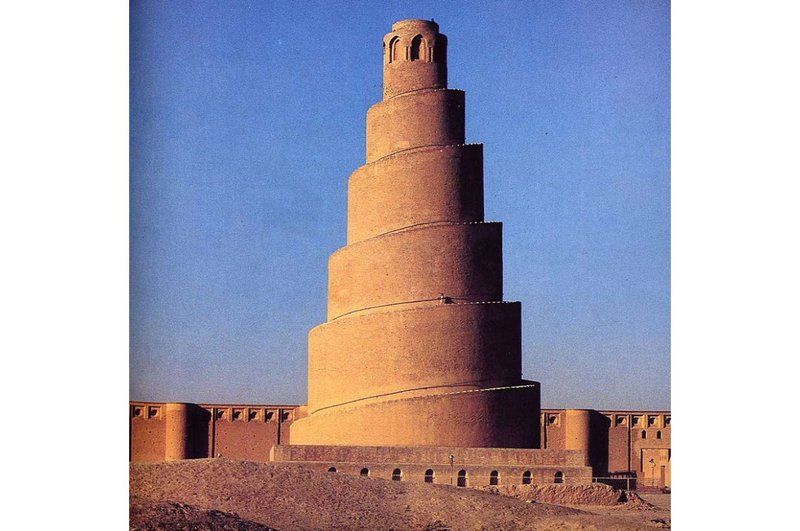 The Malwiya Minaret at the Great Mosque of Samarra, Iraq, 848-851

The Malwiya Minaret at the Great Mosque of Samarra, Iraq; 848-851

The form of the minaret of the Great Mosque of Samarra stands out even within the varied lineage of towers for the Muslim call to prayer. Built as the crown not only of the largest mosque in the world at the time but of the new capital of the Abbasid Caliphate that ruled the known Muslin world, Caliph Al-Mu’tasim’s tower was both a powerful statement of arrival and a forceful claim to continuity. It recalled both the massive ziggurats of the great Mesopotamian cities that had come before, as well as the great Spiral temple tower which had marked the heart of pre-Islamic Firouzabad in Persia, anchoring the Caliph’s newly-built city through a union of the novel faith, its dynamism and the gravitas and historical weight of the region’s incomparable architectural heritage. 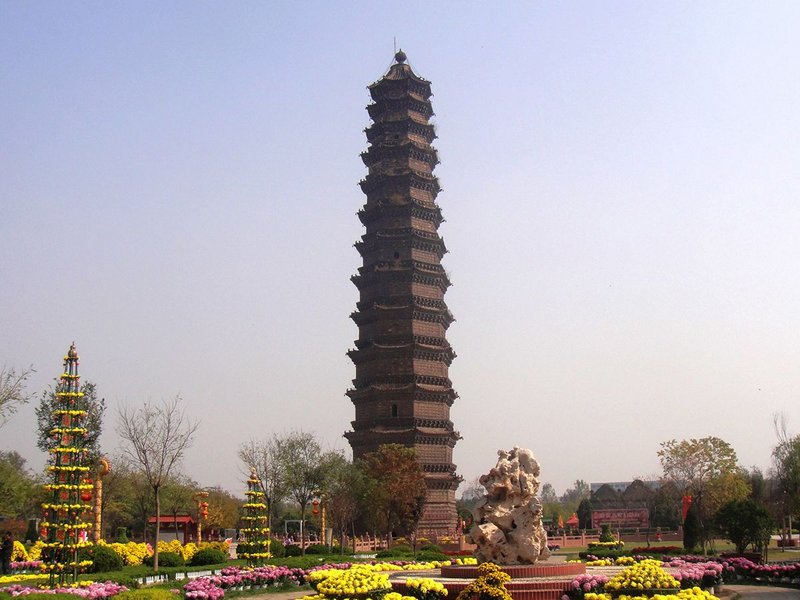 One of a series of tall pagodas built during the Song dynasty, the Iron Pagoda – a brick tower so named because of its colour – marks a high point in the elegance that could be achieved with this Chinese arrangement of vertiginously stacked eaves. Evolving from the reliquary form of the Buddhist Stupa, pagodas took on the shape to which we are accustomed when they arrived in China. They are a combination of two different architectural types, the military tower and the Chinese pavilion, with the height of the former taking on the vertical repetition of the latter. These inventive towers were used as religious monuments, as well as signifiers of the dominance and cultural achievements of the ruling dynasty. 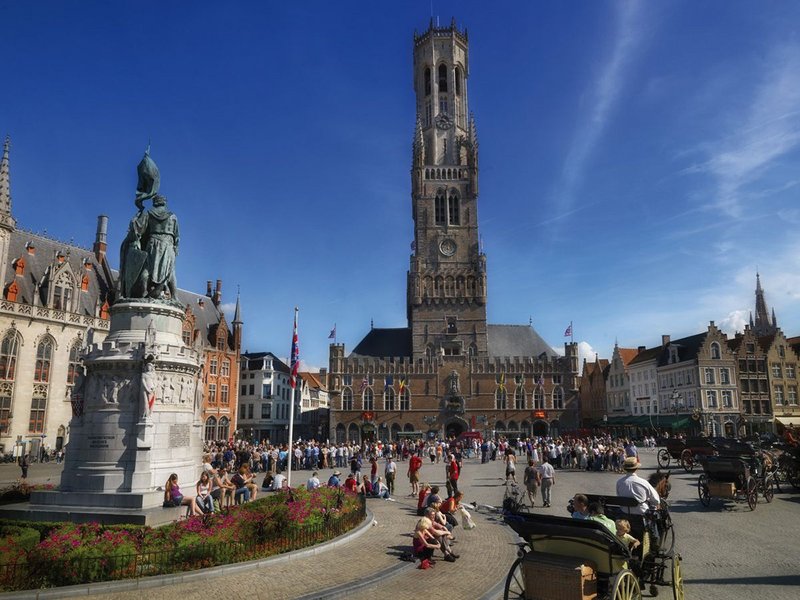 The gargantuan belfry of Bruges embodies the incredible rush to the skies that occurred in northern Europe during late medieval times; belfries, much like minarets, acted as the focal points for civic pride and architectural ambition in each city. Like many in modern-day Belgium, Holland and northern France, this belfry was built above the main market hall and functioned both as the civil and the religious focus of the city, with its bells tolling for Christian ceremonies as well as to mark standard working hours and city fire alarms. Although Bruges, with its later octagonal top, is a much-copied architectural precedent, and manages to emphasise its scale to almost sublime effect, it was the more plain belfry of Ghent (one of that town’s trio of giant towers) that managed to attain and hold on to the title of tallest belfry, only briefly losing the prize when the citizens of Bruges – in an attempt to best their rivals – added a wooden pinnacle to their tower in 1487; it was destroyed by a lightning strike after only six years, handing the title back to Ghent. 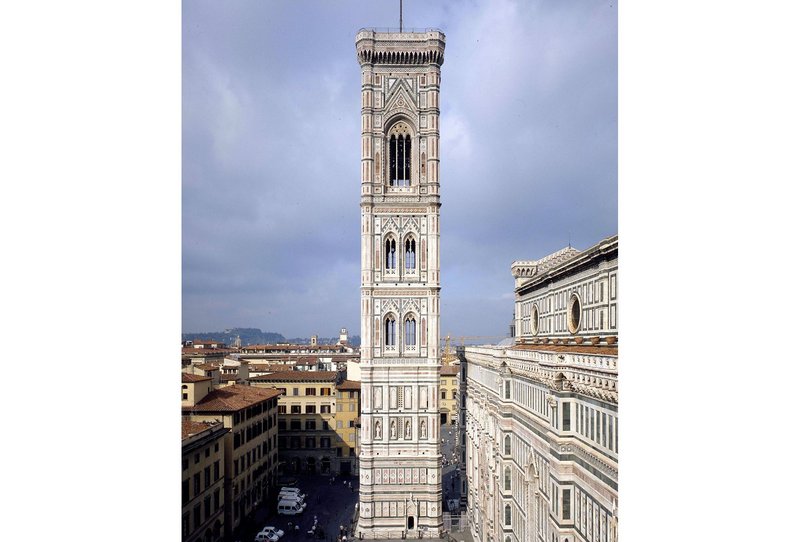 Florence, like a huge version of San Gimignano with its myriad competing towers, was a forest of extrusions before the 13th century. Campanilismo gripped the towns and cities of the Italian peninsula, with each competing family throwing up its own campanile to show how powerful it was as well as to provide itself with a defensive retreat of last resort in the permanent pitched battle that was civic life of that period. As part of their efforts to bring the warring families into line in the 13th century, the city ordered all these towers to be cut down to acceptable parapet level. One remaining tower that had been built by the Ghibelline family, already partially lowered, was incorporated into the seat of Florentine government – now the Palazzo Vecchio – and became the singular permitted vertical marker of profane power from that point on. Down the road, the cathedral of Florence was allowed its own marker of city might: its free-standing campanile was built as an emblem of divine power. The tower is an astonishingly delicate piece of design started by Giotto and completed by Pisano and Talenti, one which creates multiple hierarchies both along the vertical articulation of the tower and within its lively polychromatic surface that dissolves into an interconnected grid of delights. These details emphasise its overall coherence while rendering it light and ethereal, the very opposite of the somewhat terrifying effect achieved in Bruges. 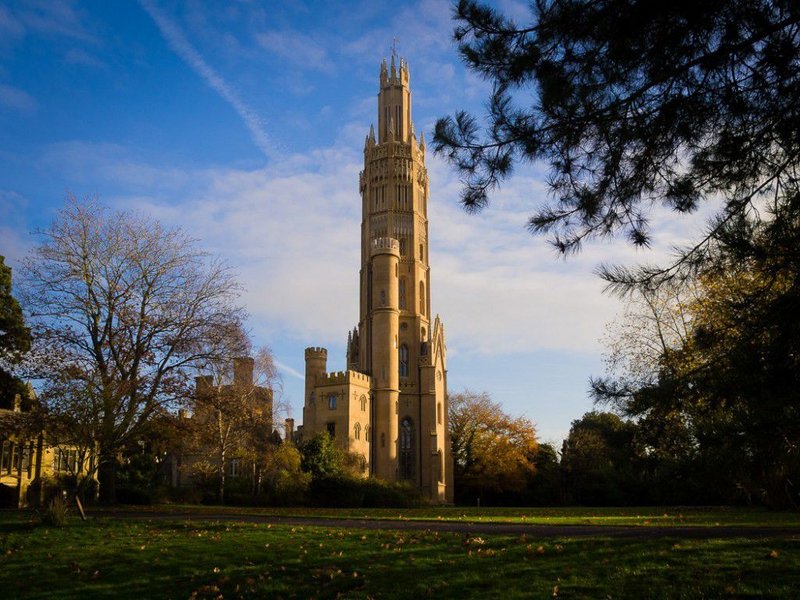 While most towers throughout history have been confident markers of a positive outlook, a bright future foreseen and a rich present, the Romantic tradition threw up an intriguing alternative: the mighty tower which was both aware of – and actively courted – the precariousness of its own thrusting bravery. The huge Fonthill Abbey built by James Wyatt for William Beckford between 1796 and 1813, a sprawling country house with a spire of epic scale, embodied this tendency only too well; with its tower collapsing on numerous occasions. Hadlow Tower, built in the same spirit for Walter Barton May, has proved sturdier, although the rest of the house around it has been lost, leaving the tower wonderfully fulfilling its purpose as a trigger for the contemplation of greatness lost and the passing of all things man-made. 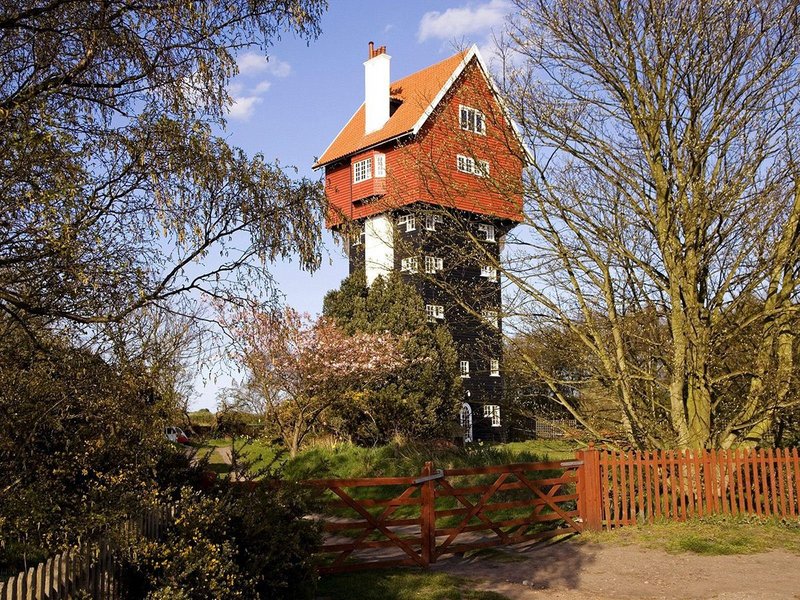 Thorpeness village, a purpose-built resort in Suffolk created by Stuart Ogilvie ‘for people who want to experience life as it was when England was Merrie England’, needed a water tower. Unfortunately water towers are difficult to fit into the image of a picturesque English village, and so the concrete structure erected by the Braithwaite Engineering Company of London was camouflaged by Ogilvie and his architect F. Forbes Glennie as a traditional house, one that just so happened to be raised 15m off the ground. The base up to the raised house (which contained the water tank) was designed for and inhabited by a Mrs Malcolm Mason, writer of children’s books, which some have speculated may have added impetus to the fantastical design of the tower, and indeed it was Mrs Mason who coined its poetic name. 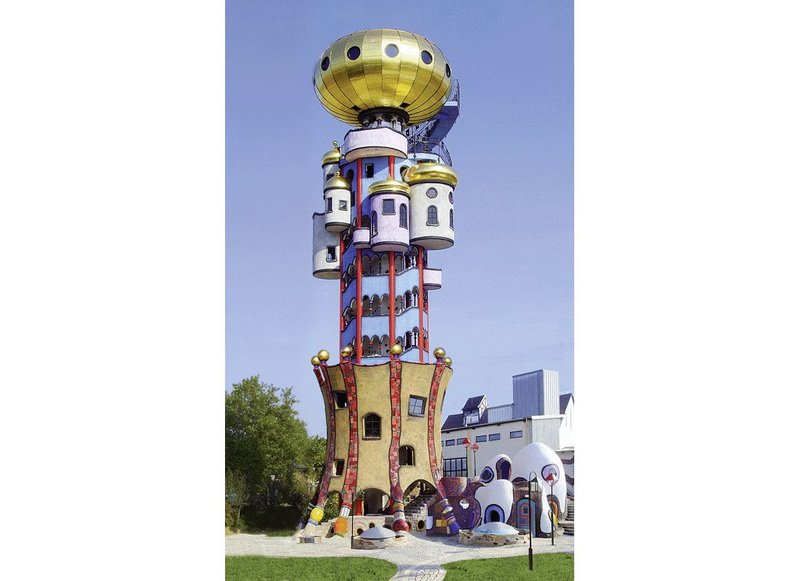 Towers have proliferated and grown in scale at an unprecedented rate through the 20th and 21st centuries. Telecommunications towers provided ample opportunity to show off a city’s modern credentials, from constructivist innovations like the 1922 Shukhov tower in Moscow to the vast Ostankino tower built in the 60s in the same city. There are other examples in London, Prague, East Berlin, Bratislava, Kuwait, Toronto and Barcelona, with a new generation of supergiants recently kicked off by Tokyo’s Skytree and Guangzhou’s Canton Tower. Follies, or towers without any real purpose other than entertainment or symbolism, have become equally frequent, following the example of Gustave Eiffel’s great tower for the 1889 Exposition Universelle in Paris and its imitators at Blackpool and New Brighton. These include the Space Needle in Seattle, the Orbit in London, the i360 in Brighton, the Great Peace Prayer Tower in Osaka, the Bayterek in Astana, and – pictured here – one of three towers designed and built by Friedensriech Hundertwasser. An eccentric architect with his own vision of space and buildings as places of the imagination and personal liberation, this tower was commissioned by a German brewery as a monument and viewing platform for its visitor centre. It is a vigorously wilful union of the most fantastical of architectural notions, pointing the way towards a rich and dynamic future for this ever-alluring, deceptively simple building type.