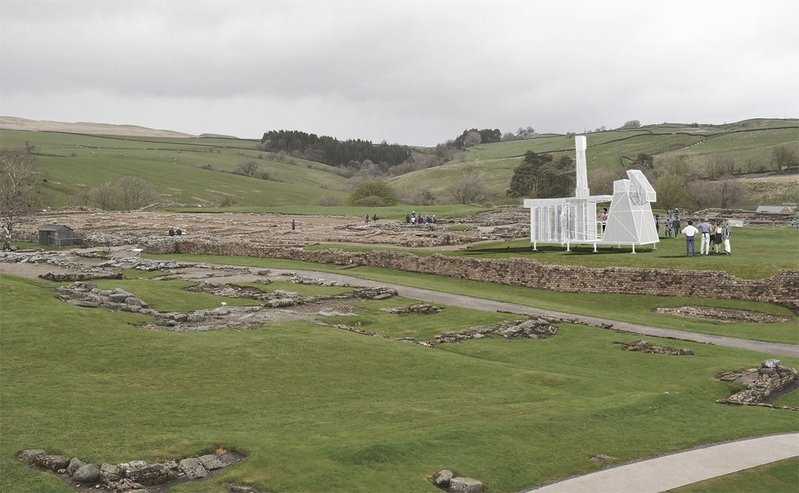 Visual of the Mansio, designed by Matthew Butcher, at Hadrian’s Wall.

Nearly 2000 years ago, officials travelling to forts along Hadrian’s Wall on the northern extremity of the Roman empire would have been glad of a mansio, a government-maintained travel lodge where they could rest while on the road.

Architect Matthew Butcher has designed a moveable contemporary reinvention of this building type as part of the Hexham Book Festival and Arts & Heritage Touring Project, which launches next week.

Clad in 40m-thick white polycarbonate, the steel structure is conceived as a ghostly ephemeral presence as it moves around six different sites along Hadrian’s Wall from 23 April to 11 September.

The brief for The Mansio specified a structure that would provide a semi-sheltered place to view the surrounding landscape, take refreshment, and most importantly listen to new pieces of work from poets and authors commissioned by the Festival on the theme of borders and colonisation.

For Matthew Butcher the challenge was to provide these functions in a single structure capable of relating to a series of different conditions, including quiet ruins of Roman forts in rural settings and proximity to a busy road near Carlisle Castle, as well as demounting easily for transit and re-erection.

‘We’re fascinated with the idea of what a mansio was,’ says Butcher, who has walked stretches of Hadrian’s Wall in the past.

For his ‘mobile ruin’, the architect chose to express a juxtaposition of different components in response to the incomplete nature of the Wall’s ruins.

‘One thing that’s interesting about the ruins is that they’re incomplete abstractions of what the buildings once were, abstracted from their original form,’ says Butcher, adding that a single expression wouldn’t have been appropriate in the variety of settings. 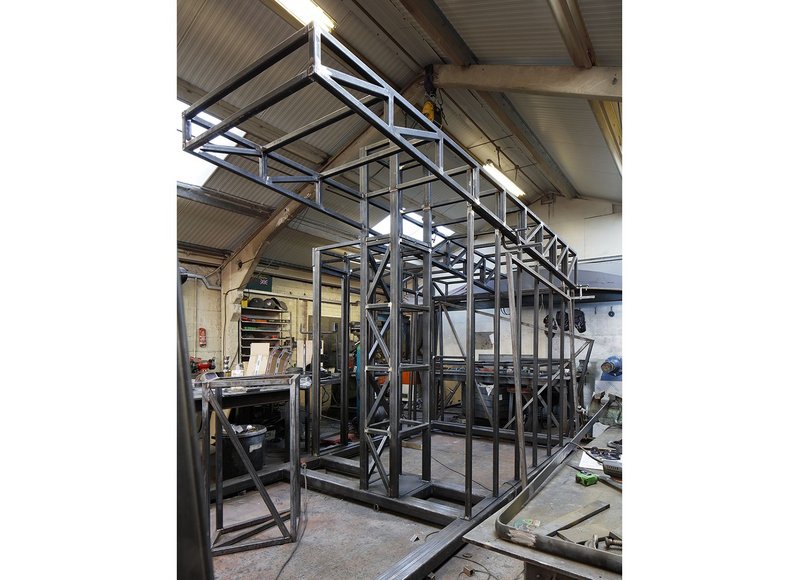 The steel frame of The Mansio under construction.

The outcome has three distinct components. It is signposted in the landscape by a 6.3m high tower, conceived as a reference to historic military architecture and the industrial language of the North East.  Similarly, the chamfered form of the front vessel, which creates an enclosed area for sitting and listening to new pieces of work, is abstracted from the form of a cement works near Carlisle. The third component, reached by an entrance ramp, is the gatehouse, a semi-sheltered area with louvred windows, a tea point and literature on the commissions.  The design also allows for projection and an outdoor seating area.

The 7.5m long by 2.5m wide structure was built by London steel fabricator Flux Metal and engineered by Structure Mode with a steel frame designed in dimensions to suit a trailer. It is partially dismantled for transit into the components of gatehouse, tower and vessel  – the latter in two parts – then assembled in situ on jacked legs rising 0.5m to give added visibility in the landscape. The top of the tower and the top of the vessel are bolted on last.

A matt rather than gloss white finish was chosen as more appropriate to the ephemeral effect that the architect was after.

It is hoped that a further use for the £50,000 structure will be found once the Festival and tour is over.