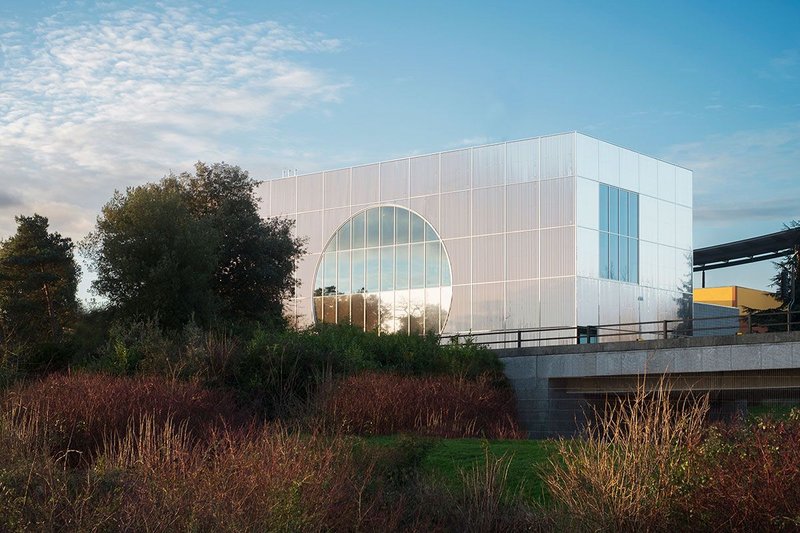 The new MK Gallery extension with its all-seeing window as viewed from Campbell Park. Credit 6a.

This is a fascinating exercise: how to capture the original spirit and subsequent history of Milton Keynes, and condense all that into one expanded art gallery? It’s a tough job that nobody had to do but one group of people firmly wanted to: especially the proprietors of 6a Architects, Tom Emerson and Stephanie Macdonald; artists Gareth Jones and Nils Norman; and MK gallery director Anthony Spira. They all love the ambition and identity of the city as it was designed in the 1960s and built in the 1970s, and they wanted to celebrate it.

The result is an art gallery, some 50% bigger than it was before, which acts as a visual condenser of Milton-Keynes-ness, in parts very obvious, in other parts very oblique. It opens on Saturday. This is not normal territory for 6a. As Emerson puts it: ‘It’s great for us because everything we’ve done previously has been in London or Cambridge where it’s like wading through heritage mud. Here, the land is hard and dry and people are interested in the future.’

They are also interested in the future as it was previously imagined and then half-forgotten – a product of Leftist thinking that was paradoxically loved by Margaret Thatcher. ‘Here’ is at the top end of MK’s axial Midsummer Boulevard, overlooking Campbell Park with its mystic mound. There’s more than a danger that the city will lose the clarity of its original landscape vision – and since 2000 a terrible anomaly has marred the journey from the railway station at the south end of the original centre to the gallery at the top. That’s the entire length of Midsummer Boulevard, and it should be achievable in a straight line. Unfortunately the axis is interrupted two-thirds of the way up by a half-arsed shopping centre expansion, plugged into the side of the original very long, rigorously rectilinear (and now listed) mirror-glass mall. It’s by Milton Keynes Development Corporation architects Derek Walker, Stuart Mosscrop and Christopher Woodward and was opened by new PM Thatcher in 1979. Perhaps the rapid decline of the retail sector generally will lead to the reinstatement of the axis at some point.

The MK gallery was itself an addition, though far from disruptive. It was slotted as a late extra into one side of the entrance plaza to the city’s theatre, designed by Blonski Heard to occupy a complete city block and opened in 1999. Everything was properly on-grid but the gallery was little more than a couple of basic boxes and turned its back on the open park landscape behind. Wholly refurbished and extended to much better environmental conditions and security (necessary to enable it to be part of the Government Indemnity Scheme when borrowing valuable and vulnerable artworks and objects), it now has a sequence of five exhibition galleries, shop and café, education studio and outdoor playspace.  For the first time you can see from front to back, an enfilade running from the entrance right through to the new window looking into the landscape beyond.

On this ground level there is not much of an outlook owing to the existence of a raised road running across the back: the view here will terminate on a single Scots pine planted in the new close landscape behind. Upstairs, however, it’s a different matter. The biggest change to the gallery comes in a rectangular two-storey extension at its north-western end, clad in corrugated stainless steel, the end elevation defined by a very large circular window spanning both storeys (bottom half mirror-glazed). Upstairs, it’s the Sky Room, a 150-seat multi-purpose auditorium suitable for events from cinema (programmed by the Curzon chain) via stand-up to live music. It’s relatively basic apart from its first-rate acoustic isolation but it incorporates retractable bleacher seating and is lined with a huge stripey curtain on a trainset-like arrangement of tracks for different configurations. With the parkland beyond, I can imagine the semicircular window being left uncovered at dusk for a rural version of Manhattan’s Jazz at Lincoln Center. This is a revenue-earning space for the gallery but it can also be used for art installations – a sound piece was playing there the day I visited.

The external finishes, other than the stainless steel of the new extension, are in keeping with the colour schemes of the 1970s. There’s a whizzy red external staircase, while the colour-blocked original rendered entrance block is now done in the 1970s rather than 1990s colour palette, complete with the original and present logos for Milton Keynes. The playground is in the spirit of the 1970s (and includes a mystic mound) though apparently some of the play equipment of the time is deemed too dangerous for today’s kids.

The Milton Keynes-ness starts at the entrance – previously part-concealed, oddly, by a concrete fin wall. Now there is a porch taking the form of one of the familiar original MK features: the simple black steel porte-cocheres that act as markers and shelters for the pedestrian routes from boulevards to buildings. Once inside, it’s a world of 70s exposed services, colours and graphics including more red and yellow surfaces and black ceiling, all seen in the MKDC architects’ ‘custard factory’ department back in the day. The big lift between the floors is pure yellow inside. 6a’s reworking of the spaces in the original buildings includes a mysterious high-level door to nowhere which apparently used to connect to a service stair. Left in place as a bit of recent history, it’s locked, reassures Emerson.

The obliqueness and subtlety comes in the design of the new extension. Its form is based like many of the artists’ interventions on ‘City Club’ a never-built supergroovy MKDC leisure and cultural centre much influenced by Archigram which would have occupied a complete city block. Part of this involved a rectilinear gridded steel form containing a silver sphere. The memory of that – a memory of the utopian never-built – is enshrined in the silvery extension with its huge circular window.  Your average punter will no more get that allusion than they will the neon heart on the entrance façade, which is based on some cover artwork of the time from AD magazine’s coverage of the new city. But they may well pick up the fact that the new gridded building is based on the gridded city it sits in.

‘We’ve tried to avoid being over-nostalgic’ says Emerson. Well, up to a point. There’s bags of a very architectural kind of nostalgia here, for a different, optimistic, public sector era and the way it expressed itself. I love this aesthetic and this spirit as much as anyone but there was always something paternalistic if not Big-Brotherly about the way MK communicated with its burgeoning population. The point is, all that is now historic. This building – and its opening exhibition ‘The Lie of the Land’ with a broad landscape theme including much about the city itself – is all to do with a new city that now has a tradition of itself.  I’m glad that tradition is recognised and invoked.