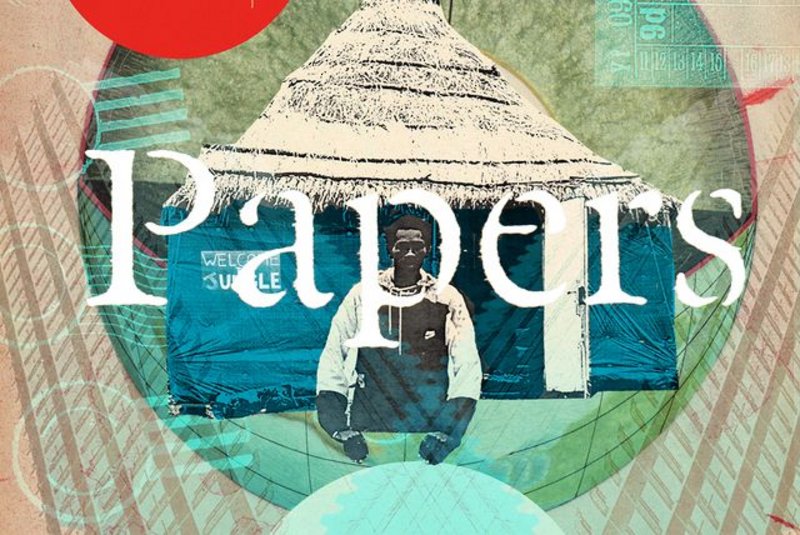 Robert Mull, former dean of architecture at the Cass school, has been on quite a journey since January. The journey, he relates, has taken him to refugee camps in Calais, the Greek island of Lesbos, and most recently Izmir in Turkey, or ‘Little Syria’ as the fast-developing refugee enclave is known. Now, with the Architecture Foundation, he is staging a one-day celebration and discussion of the culture of refugee and migrant settlements at the Barbican in London on 12 June. This involves all those involved – the various volunteer agencies, architects, voices from the affected regions and some of the refugees who are now settled in the UK. This is the ‘Papers’ festival – ‘papers’ eliding the idea of the identity documents which loom so large in this crisis with academic papers.

Mull has seen at first hand how – left to their own devices – refugees and migrants start to make recognisably civic places in their ‘temporary’ places of settlement – the schools, shops, places of meeting and worship and so on. Along with this goes music, art, the normal human activities. It’s a creative and urban culture, says Mull, happening in places that are often otherwise horrific. The inhabitants are not always allowed to do this, however: the demolition of the Calais ‘Jungle’ camp by the French authorities was largely to avoid a complete unplanned town developing. As with Victorian and postwar slum clearance programmes, what might seem to be the enlightened provision of better, more hygienic (if very basic) housing can also mean the destruction of delicate communities. In the case of Calais, distinct districts relating to the various national origins of the inhabitants had developed. The forced evacuation and demolition of these areas was accompanied by tear gas, though some of the ‘civic’ buildings were allowed to remain, now surrounded by wasteland.

Mull’s introduction to all this came when he was asked by friends to help them construct a building on Lesbos for migrant/refugee use– a Bucky dome they’d been given. On arrival, Mull quickly found himself on the beaches assisting with the boatloads of people arriving there. ‘I was horrified to find I was useful,’ he says, having imagined he would find himself getting in the way of an official operation. Soon he found himself helping with other aspects of the refugee camp there, such as basic drainage infrastructure.

From this he went to Calais, thence to Izmir, researching and learning. Some refugee camps in Jordan and Syria have been in existence for 20 years: how do they and should they develop? Mull warns that because national governments merely tolerate but do not encourage such places, they are not allowed to develop naturally and so are stuck in a perpetual state of what he calls adolescence – places prevented from becoming real, grown-up places.

This is something the RIBA is also becoming involved in. The Institute is a member of the new Global Alliance for Urban Crises, launched during the first-ever World Humanitarian Summit (WHS) on 23-24 May 2016 in Istanbul, Turkey. The Alliance will bring together urban professionals, UN agencies, the development community and the private sector on a common platform for advocacy, lobbying and action to respond to the growing importance of urban humanitarian assistance.

What can a professional members’ organisation such as the RIBA do?  Its first action is to collaborate, joining  forces with the Royal Town Planning Institute and the Institution of Structural Engineers to create an advisory group. The aim of this is to provide the international humanitarian and development community with a more effective conduit to the combined resources of over 100,000 members working in more than 150 countries throughout the world. What they can start to provide, says the RIBA’s international vice president and ambassador for ethics, Peter Oborn, is: ‘A vital new global framework for urban preparedness, response and recovery.’

The Papers festival is billed as ‘bringing together refugees, architects, artists, academics, musicians, poets, chefs and builders’. It will take place in the Barbican Conservatory and adjoining rooms thanks to the support of the Barbican. One of the installations will be the ‘Blue House’ by artist Alpha, an art school and gallery rescued from the Jungle in Calais and reassembled here.

Meanwhile Mull is trying to find ways for refugees known now to be settled in Britain to travel to the Papers festival – any practices willing to fund someone’s travel costs for this should contact the Architecture Foundation.