The new OMA ‘Progress’ show, documenting the last twenty years output by the now world-famous architectural firm is full of some big gestures, but none so big as the main move they made to open the never before opened west entrance of the art gallery at level three. 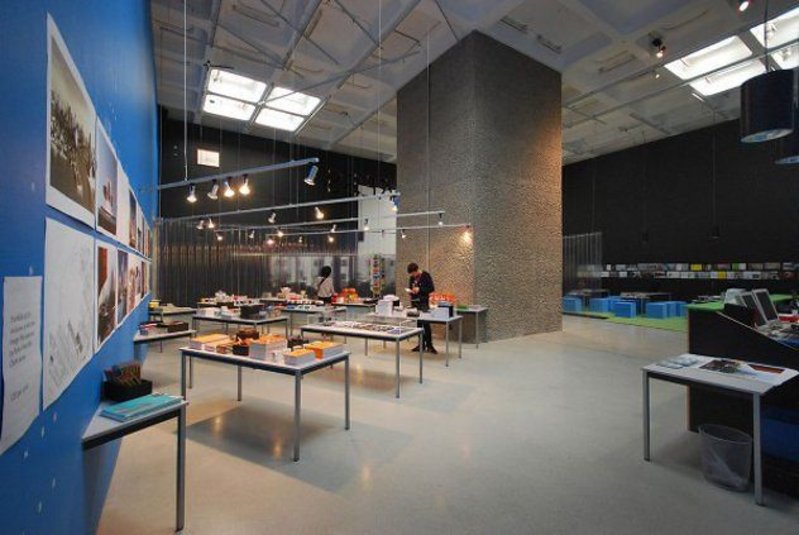 Though it’s a paying show, the public can, for its duration, use a ‘free’ route that has been carved out through to the main circulation core of the complex and have a little curatorial taster of the firm on the way. It’s a little experience of the utopian gene, the slogan that Koolhaas has christened this show with, because once you’ve arrived at the Barbican’s lift cores, it’s back to the same old dysfunctional, set-in-concrete circulation that has blighted the complex since it opened- I doubt whether even OMA could do anything about that.

The show has been curated by Belgian art collective Rotor, who made their name at last year’s Venice Architecture Biennale, displaying bits of building bearing the marks of human traffic- Koolhaas termed them ‘borderline material fetishists’, and he’s not wrong- the mark of materials is keenly felt here, from melted and melded baubles of recycled glass and huge panels of aluminium shotfired underwater, to partner Ellen van Loon’s collection of Italian travertine. It’s a material pleasure keenly felt it seems, by both consenting parties.

Otherwise, the show seems to be about the processes employed by the firm to communicate the spatial ideas and theoretical concepts that have defined their output for the last two decades. This seems almost random, which seems appropriate; as we are bombarded with roomfulls of faxes, morphing models and practice postulations as Post-Its. One room just bombards one million images from the OMA archive at you- like their life flashing before your eyes. The show feels a lot like a 3-D version of Al-Manakh or Volume. Looking at it, someone’s obviously done a lot of research; but you won’t have the time to interrogate it, and it would just be plain wrong if they presumed to do that for you. Personally I would have liked to have seen the planning report for their Rothschild Bank in the City up on the wall- that’s definitely an absorbing work of facts and fictions, and well worth the read.

So while it’s all quite thrilling and left-field, I have to say, I left none the wiser about who OMA were and what they have actually become. In his press conference address Koolhaas spoke about structural changes occurring within the office, so maybe they’re not sure either. I looked around to see nearly all the partners there, and putting two and two together made seven. Perhaps the economic downturn has hit them too. Maybe they’re all twiddling their thumbs in Rotterdam and this is some kind of practice showcase to rustle up new work. But for a practice that defined the concept of ‘Bigness’, the concept of downsizing must seem anathema.