Museums might make daring plans but the reality is much more tempered. ZMMA’s Adam Zombory-Moldovan tells how the firm has carved out a quiet niche in this changing landscape 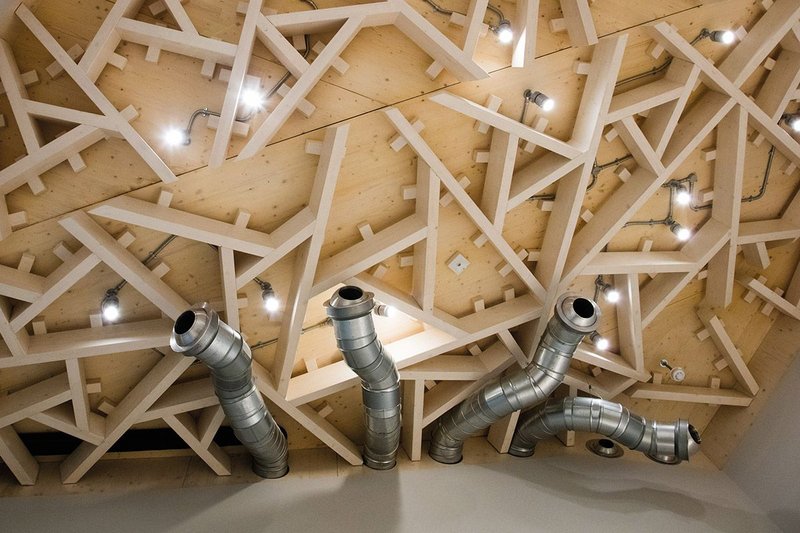 The ceiling at the Heath Robinson Museum overtly expresses the services into the room. Credit: Michele Panzeri

ZMMA defies anyone who thinks museums and galleries are a shrinking market for architecture. The practice’s director Adam Zombory-Moldovan keeps interrupting our conversation with projects the firm is working on that he forgot to mention earlier. The practice definitely wins and gets stuff done. But looking at some of the current drawings, you have to ask, is there a wider picture? It’s more than enough work to sustain a practice of 12 and not entertain other types of commissions.

That was ZMMA’s mission when it started out in 1989 with Zombory-Moldovan’s Cambridge University contemporary Rowan Moore, now an architecture critic. It wanted to do arts and cultural projects; and its driving force was an interest in collections – paintings, sculptures, museums, virtually anything.

Moore split off from the practice (though it kept his initial in its name) in 1994 while it was still deep in commercial and private galleries – Rothko, Constable, medieval and Asian acquisitions. But by 2000 the practice wanted to move on, climb the proverbial architectural pole, and do public buildings.

The first came with the Watts Gallery in 2001. Its long gestation meant that for much of the past 20 years ZMMA has taken on other projects to keep going. It always tried to connect with the creative industries and found work for a craft centre in Dorset, the restaurant and staff canteen at Sotherby’s. Today it has secured the sweet spot it wanted.

Just at the moment ZMMA has galleries at London’s Geffrye Museum, the Fry Gallery extension in Saffron Walden, a building at Gainsborough’s House in Sudbury, Guildford Museum and Castle redevelopment, the Royal College of Music’s museum, the Scottish Design Galleries at V&A Dundee and work for the National Museum of Scotland on its plate.

The question is how ZMMA has managed to get there. Others have come and gone, as have the museums and galleries they created. There is something in the steadiness of Zombory-Moldovan’s character which could be appealing. He certainly gives the impression of knowingness and understanding without elucidating a great deal. Or perhaps it is by quietly playing on client fears, exploiting an architecture instinctive to him that reassures them too. Of course for Zombory-Moldovan, it’s not about him as an individual. It’s about what he offers; expertise in two sectors which do not usually overlap – architecture and exhibition design. The practice prefers to do both, but equally can do just one part and work well with whoever else is contracted. Zombory-Moldovan knows only one other architect that also truly bridges both disciplines, Pringle Richards Sharratt.

‘What pins our work together is the crafted, bespoke way we approach projects and the passion we have for collections,’ he says. ‘We spend a lot of time with the collections and curators. We spend days in object stores looking at the material, getting to know the objects, as part of the design process; what they are made of and thinking about how they are going to be best displayed.’ He suggests there are so many commissions because museums and galleries are getting more ambitious – daring to start projects and hoping to fund them.

And there are a lot. Did I forget to mention that the practice has completed three projects in 10 months: refurbishing the V&A London’s Europe 1600-1815 Galleries, Watts Studio (an extension), and the brand new Heath Robinson Museum in Pinner where we met? But do we need this many museums?

‘We need more,’ replies Zombory-Moldovan. For his benefit? ‘No, for everyone’s. They are life enhancing, where people can share space with objects of value and wonder. There has been a huge increase the numbers of people visiting museums and galleries. It’s become a major social activity, like living rooms for the city, a place and reason for people to gather.’ 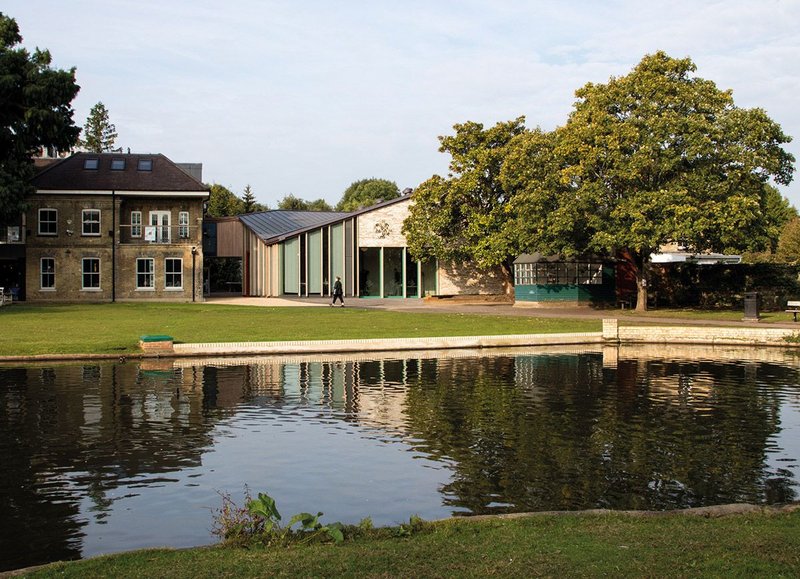 The museum attaches itself to the West House Trust in Pinner Memorial Park. Credit: Michele Panzeri

The Heath Robinson Museum is one of these ‘daring’ examples. The project started through the Heath Robinson Trust which has looked after the illustrator’s collection since his daughter bequeathed it in 1992. It found a collaborator in the West House Trust in Pinner which helped it build a home on an adjacent car park. ZMMA’s building is an expression of the slightly awkward site and its slightly unattractive brother, yet makes the most of fantastic views onto the Pinner Memorial Park with a blind wall to the rear.

Inside, building services and mechanics feature alongside exhibits, as Heath Robinson himself would have done in his drawings. These expressions take place primarily on the ceilings, and despite looking contrived, particularly in the puzzle of bracing, they aren’t – they have a structural logic. The same applies to the lighting and ductwork, which aren’t just exposed, but artfully arranged for aesthetic effect. There’s a clear enjoyment in that process. Copper light fittings are made with run-of-the-mill copper pipes, walls only rendered white in the display area, recesses for electrical wires left open. The ideas are considered, collected and result in a reliable, comfortable building.

For this museum, like Watts Studio (RIBAJ March 2016), the guiding concept is right but the method of its application is just so safe and controlled. There’s no sense of letting loose, of a mad streak that makes the building itself a destination. Initial ideas might be daring but execution is more careful. This resonates with what Zombory-Moldovan says about how museums have changed since the heady days leading up to the millennium and the early 2000s when major new institutions were catapulted into unlikely spots – Middlesbrough, Bilbao, the National Centre for Popular Music in Sheffield – and international architects transplanted to do them. It presents the work as a sign of the times. 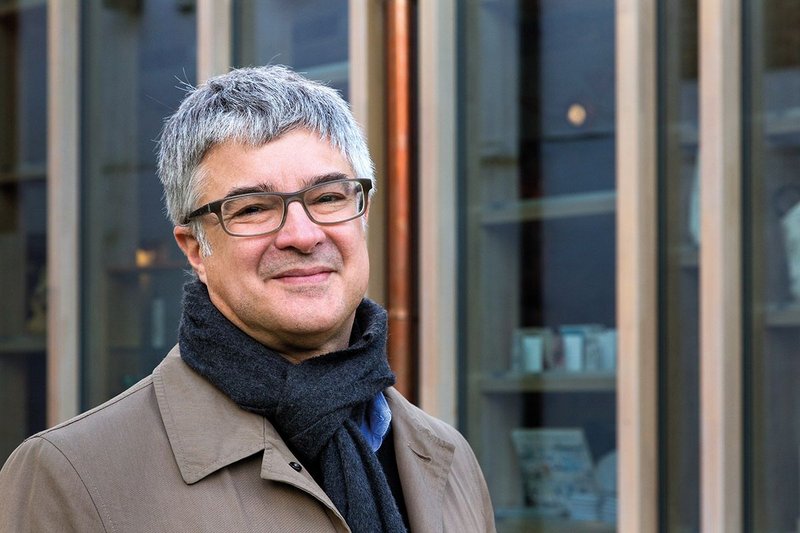 ‘Since 2000 things have been much better scrutinised and conceived,’ explains Zombory-Moldovan. ‘Museums and galleries are more crafted as ideas and ambitions; organisations wanting to do capital projects think longer and harder about it.’

Have they had their fingers burned? ‘Yes, people have learned that more can be gained by more modest and scrutinised schemes. There is more public consultation and engagement with community, and thought about who the audiences are. There is less expectation that people will turn up when the doors open.’

If ZMMA is seen as a practice sweeping up so many of these types of commissions, the architecture says clients are taking a more restrained, less risky attitude. ZMMA’s work makes contemporary modifications to what is essentially a vernacular language – in whichever appropriate style it sees fit for its project. While Zombory-Moldovan’s ultimate ambition is to do a big new museum, the usual loud architecture for that type of commission might still – just about – be preferred. Although Herzog & de Meuron’s Tate Modern Switch House – less interesting than its recent Hamburg Elbphilharmonie – and the recent Stirling win for Newport Street Gallery, could suggest that’s changing too.

So if he’s right, and more ambitious museums and galleries are daring to start projects and hoping to fund them, where does that leave their architecture with regards to Brexit? Few of ZMMA’s projects attract EU funding. Some do when they’re part of a regeneration development, but plenty are significantly UK funded, with US money (so far) involved too.

‘We can only guess,’ says Zombory-Moldovan. ‘There will be a readjustment – we’re not seeing any additional caution, but the thing that can affect projects is the stock market. Donors give more money when it does well, and less when it doesn’t. Brexit will change the procurement of designers because currently they go through OJEU.’

Following the US election, any extra jitters that the result causes in the UK look like making ZMMA and its architecture well placed to soak up work that does materialise – possibly in an increasingly cautious context.