Glasshouses offer the promise of openness and freedom, in a ghostly representation of architecture

The glasshouse holds a particular place in the history of modernism. It represents both a point of origin and a recurring dream. For the early moderns, Joseph Paxton’s Crystal Palace, designed for the Great Exhibition of 1851, offered the possibility of a radical break with the past, a moment when (supposedly) rational engineering and technology would sweep away the stultifying grip of all that architectural history.

The glasshouse is a form of anti-architecture, the negation of building with all its heavy-walled certainty. Skeletal and transparent, glasshouses are like ghost buildings, an ethereal and barely-there kind of architecture. Despite this they carry a heavy load of symbolism: transparency, openness, endlessness, freedom. From Bruno Taut in the early 20th century to architects like Lacaton and Vassal today, the ethereal, immaterial properties of glass buildings have fascinated the architectural avant garde. One could say that the ultimate glass house lies in Italian firm Superstudio’s late 1960s collages, where the architecture has vanished altogether, leaving us free to roam unconstrained across the globe like digital nomads.

All this might seem a high-falutin’ way to describe what is often a very ordinary building type. After all, many of us have glasshouses, small garden structures used to grow tomatoes, store bags of peat and hang up our secateurs. These cheap structures might be a long way from, say, Philip Johnson’s exquisite Glass House in New Canaan, Connecticut, but even the humblest are places where the normal rules of nature are enhanced and distorted. Inside them the world is a little more fecund, a little more exotic and the vegetation more abundant. Glasshouses – think everything from Kew Gardens to The Eden Centre in Cornwall – are representations of the world shrunk down, collapsed geographies of climate and eco-system.

And they themselves can be pretty huge. The largest greenhouse in the UK is called Thanet Earth in Kent and occupies 9ha. That’s a lot of tomatoes. 225 million to be exact – about 12% of the UK’s consumption – and they are picked every single day of the year. Driving across the Isle of Thanet, one can see its vast expanses of glass shimmering, reflecting the sky and surroundings. This is the industrialised version of the Garden of England.

Our glasshouse plays on this theme of the industrialisation of nature and the (hyper) productive landscape. But it also refers to the exotic, often extraordinary character of Victorian glasshouses with their elaborate profiles and figurative elements. It mimics an archetypal factory building, playing on the expressive potential of the frame to create outlines, a little like an un-rendered three-dimensional computer model. But it could also be part of a range of glasshouses, each shaped like different building types: factory, church, terrace, tower block. Together they could make up a small town of glasshouses, a new form of ‘rural’ settlement reflecting the scale and economic importance of contemporary market gardening.

The glasshouse depicts an outline, a silhouette, filled in by plants and the accoutrements of gardening. In this case, the implied ‘trees’ of classically-derived column structure are literal palms, grown to form a structural grid. Here the leaves, plants and vegetal forms of classical ornamentation also provide the construction system for the building.

It combines both beauty and utility, the simplicity of the ‘kit-of-parts’ tuned to create something more expressive and figuratively communicative. In this sense, our glasshouse would no doubt be anathema to those early moderns obsessed by the abstract qualities of Paxton’s Crystal Palace. Our design delights in the ambiguities of the glasshouse, its ability to be both architecture and not-architecture at the same time. It accepts the functional aspects of the glasshouse as a given, but attempts to ‘add back’ culture.

The glasshouse’s spectral presence is increased by its mirrored base, so that it appears to float in its context. It is both more like a recognisable building and less, a suspension of the everyday and a distortion of the ordinary. 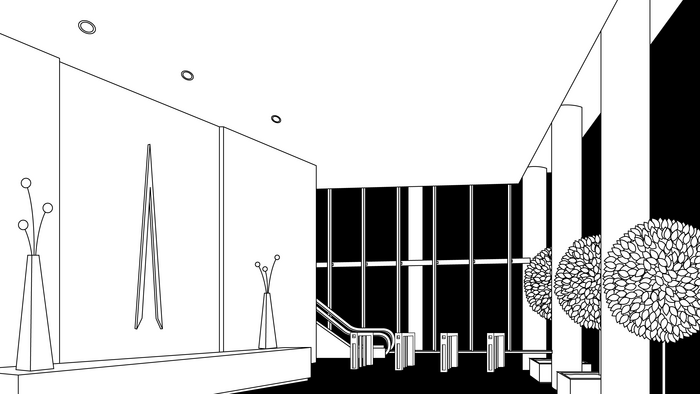