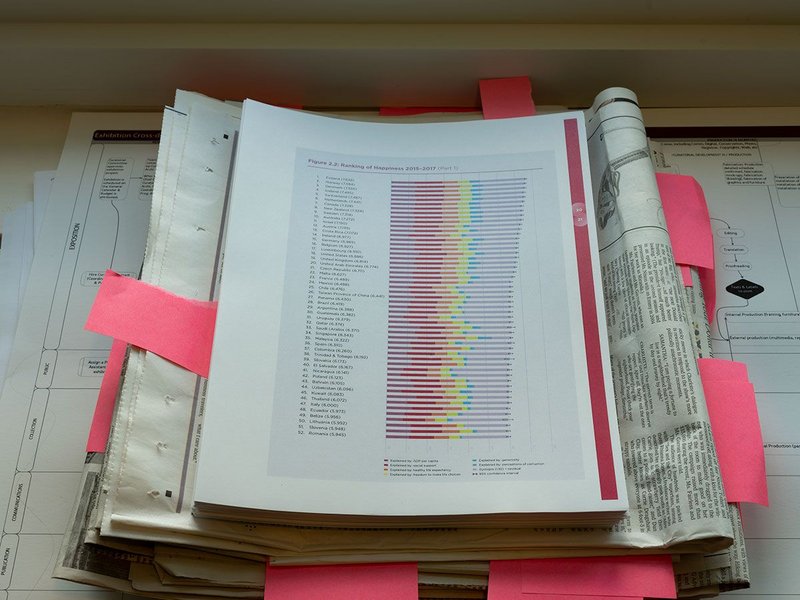 Investigating the data generated by the study of happiness. Stefano Graziani, photographer. “Rankings of Happiness 2015–2017,” World Happiness Report 2018 © CCA. From the exhibition Our Happy Life.

How does your city rank in those lists of best places to live? Is your workplace designed with wellness in mind? Is our society increasingly obsessed with the concept of happiness and how is this affecting how our buildings and cities are designed?

These stimulating issues are discussed in Our Happy Life – Architecture and Well-Being in the Age of Emotional Capitalism, a new exhibition at the Canadian Centre for Architecture.

‘The cult for the idea of wellbeing is more and more present in our contemporary society,’ says Francesco Garutti, CCA curator of contemporary architecture, who describes the exhibition as a research project in the form of a show.

‘The exhibition is trying to explore how the markets for emotional and happiness agendas are affecting the built environment,’ he says, adding that he was interested in how architecture might be influenced by subjective senses of wellbeing, and the recent development of wellbeing ratings and rankings.

The show provides context by taking us back to the 2008 financial crash, and the subsequent explosion of interest in happiness levels – Garutti speculates that this new industry may have been a response to the need for a new system of values to face the crisis. In France, Nicholas Sarkozy has instituted a new commission for measuring economic performance and social well-being, and commissioned analysis that questioned gross domestic product as the key measure of contentment. In 2012, the World Happiness Report was published by the Sustainable Development Solutions Network for the United Nations. In Canada, the Canadian Index of Wellbeing was set up to track the wellbeing of the population. The WELL Building Standard was launched in 2013, dedicated to designing buildings that help people thrive. The Monocle Quality of Life Survey has an annual list of 25 cities with the most scope for comfort, leisure and possibility.

‘Questions about emotion, which 10 years ago belonged exclusively to our lives’ most private spheres, are now a crucial part of a sociopolitical and economic system that evaluates contemporary space,’ says Garutti in the publication accompanying the exhibition.

‘The many standards for achieving mental wellbeing and emotional health compiled and published after 2008 have come to replace sustainability as the gold standard for design.’

The exhibition explores how happiness is collected and the measures behind these influential data. Dutch architects Bovenbouw and Gosia Olchowska were given the data sets and commissioned to use them to explore visions of ideal city scenes, which visitors are invited to contemplate in the show.

In all, 25 happiness indicators are examined, including comfort, security, sleep, homes, broadband access, access to nature and natural light, and the show considers whether design constructed to meet these needs is more than a ‘surface’ or branding treatment, or whether spatial design gets lost along the way. We look at a hotel room designed to Stay Well standards, which includes features such as circadian lighting and dawn simulator, a plant-extract foam mattress and antimicrobial, hydrating linens. There’s a section on lighting, including plans in Sardinia to regulate lighting to preserve darkness, how Paris is limiting shop lighting at night time and how the quality of light in the city of Los Angeles is changing with the introduction of LED street lighting. We learn about the fascinating trend of reconstructing nature in new Chinese developments, where matured trees from rural areas are uprooted – with mixed success – and replanted in the new cities in a parallel process to the migrating rural people themselves.

The happiness agenda presents, says Garutti, a radical change to the discipline of architecture.

‘How do we re-shape the role of the architect? Ranking producers and companies are taking a really strong influential role in urban planning,’ he says.

While the exhibition deliberately offers no conclusions, Garutti nonetheless raises provocative questions on the implications for designers of the pursuit of the happiness agenda. Tellingly, photos of data collection company offices when empty end the show.

‘Are the real places for the production of space today no longer architecture offices but rather media agencies, ranking production and well being data-collection centres?’ he asks in the exhibition book.