Pop Art Design is an immensely appealing show – exuberant, colourful and packed full of work by the big names such as Warhol, Hamilton, Lichtenstein, Oldenburg, Sottsass, Eames. It’s certainly not afraid to play the hits the audience wants. But there is plenty more besides by lesser celebrated artists and designers such as architect and textile designer Alexander Girard, designer of the interior and furnishings at the Time-Life Building, who is particularly prominent throughout. 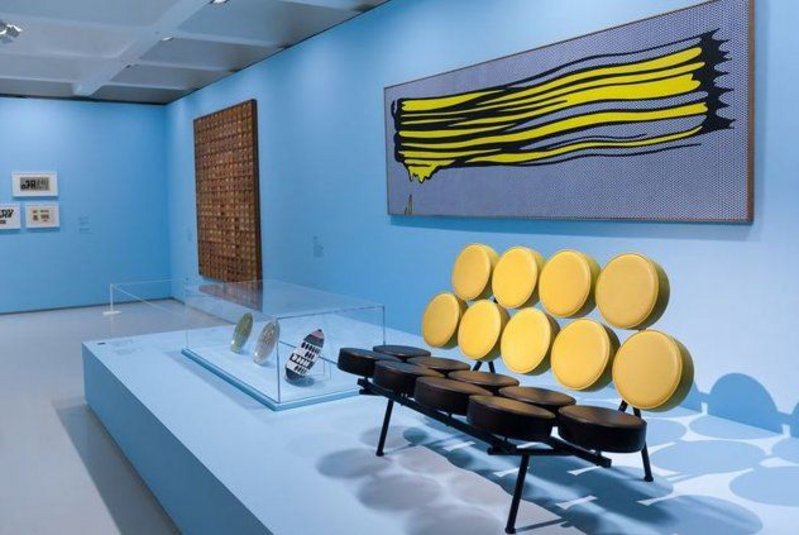 The show’s aim was to present the interplay of ideas, motifs and references between artists and designers of the late 50s – early 70s Pop era. Issues of celebrity, mass production, mass media have been well-chewed in exploring Pop Art but this broader perspective taking in design, and to a lesser extent architecture, is a welcome alternative. I would have liked even more focus on these other underlying cultural conditions that bred this genre of art and design – the cold war, unease and fascination with technological advances such as computers and robotics.

Charles and Ray Eames’ 1953 film A Communication Primer is fascinating, with its consideration of the technology and potential of different printing techniques, mass media and the use of binary code. Half a century later, designers and artists are dealing with their own responses to the next big technological revolution, one that the Barbican will explore next year in another show, Digital Revolution. What would the Eames’ have made of digital development and the internet? Without a doubt, they would have been early adopters.

The content is dazzling, whether you’re interested in the context or not. George Nelson’s asterisk clock and the Castiglione brothers’ bicycle seat chair are shown to demonstrate that an object can be both a thing and an image of a thing. As the exhibition discusses, as Pop gained momentum, it’s hard to clearly trace who influenced what between art, design and popular culture.  Commercial artists helped create iconic brands which were in turn quoted by artists and designers in their work.

There is so much to enjoy such as Bernard Holdaway’s Tomotom dining table and chairs from 1966 where each chair frames a petal of the flower-like table, and the fantastic graphics room, including work by Glazer, Bass, Rand and Vignelli. I particularly liked the large-scale photographs of fabulous homes of those who lived Pop Art and design to the full at the time - such as Verner Panton’s Basel house and photographer Ulrich Mack’s St Moritz apartment, whose lounge included seating resembling a flock of sheep.

Architecture does get a small look in - with photos from Learning from Las Vegas research, which accorded American commercial design such as hot-dog shaped hot dog stands, billboards and garish casinos the same value as classical references. There are also futuristic houses by Matti Suuronen shown close to hermetically sealed Tupperware and always-fascinating footage of the Smithsons’ House of the Future from the 1956 Ideal Home Show.

The exhibition, designed by AOC, leaves us when Pop art and design meets drug-fuelled counterculture at the end of the 60s, and dips its toes into Post-Modernism. But by then, having gorged on what’s gone before and emerged smiling but full, we’re ready to leave and move on.