We leave the Atlantic surf and body boarders of the summer beach to go down into the cellars. Moments away from the St Ives tourists on the sand is Porthmeor Studios. It encapsulates the other industries that have sustained this Cornish town, and made it famous. 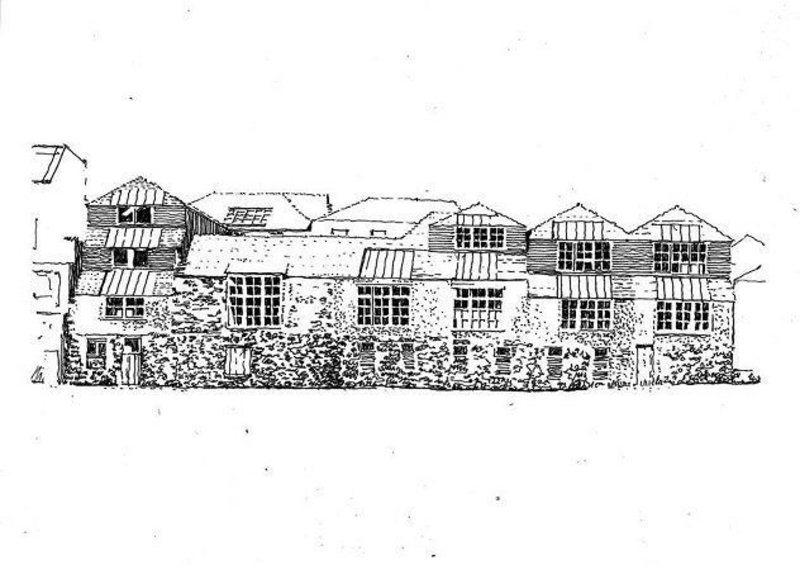 Fishing and art coexist in this building with a good dose of mining technology. It is this, historically one of Cornwall’s main industries, that holds up the building. The columns are old water pipes from mines, the 20m long lengths of timbers would have been cut alongside those for the pits and the concrete wall was unusual at that time outside mines. All this architect MJ Long and Chris Hibbert, manager of the trust which runs the studios, tell us with some relish.

A wall to keep the creeping, blowing sand of beach had long given shelter to the fishermen and their nets. In the 1890s the pilchard industry made it worthwhile building net workshops with huge tanks in the basement for pressing pilchards before sending them off to Italy. The building is now the domain of a more polite side of fishing with a carpeted net workshop below and above artists’ studios. They have an almost mythical status in this town which is famed for its beautiful light – reflected off the sea on all round the headland. In these long studios with generous windows facing out to sea Ben Nicholson, Terry Frost and Patrick Heron painted. In keeping with that tradition they have been run as inexpensive artists’ studios since 1949. But without capital investment they were getting run down, cold in winter and with mould climbing up the walls.

Cornish history has become familiar to Long since Long and Kentish’s Maritime Museum on the south of the peninsula (where she now keeps a boat). Nearby she is also working on Porthcurno Telegraph Museum and St Ives’ Archive project. But the practice is probably better known for its work with artists. It has designed studios for Frank Auerbach, Peter Blake and Ben Johnson. So it was an obvious fit for working on bringing Porthmeor Studios back to full health.

With money from, among others, the Arts Council England, Heritage Lottery Fund, English Heritage and the now-defunct Sea Change fund the studios is now part way through a £4.1 million two phase refurbishment and expansion. We stand in studio five, now occupied by Naomi Frears and once the artistic home of Ben Nicholson. Wooden boards covered in flaking paintwork stretch up to the ceiling. I wouldn’t know there has been any work done in here with new insulation and more hidden away. Long explains how there would be a certain pointlessness in repainting these water damaged boards. At stake is both aesthetics and history: a good humoured debate between Long and Hibbert about current artists’ autonomy over their own spaces and right to choose to paint whatever they like emerges over discussions about some of Nicholson’s scribbles (or graffiti) on the walls and whether that is part of the grade two star listing.

There are fewer such dilemmas in the less intact and the new studios (the building has been extended up just a little). Here the BREEAM very good local sourcing demands have been satisfied with local larch lining that has been found without too much difficulty (elsewhere winning points on the listed building has proved more problematic and costly). There has been a little chopping up of some of the studios to create a ‘starter’ or artist-in-residence studio and all studios will have stoves as they once used to (the building overall will be heated to just 10 degrees so expect to see artists carrying armfuls of logs). A new lift through the building means that tenant the St Ives School of Painting on the top floor shares access with the studios for the first time – something that Hibbert hopes might breed interesting fruitful conversations. And on the first floor a gallery and seminar room give the rearmoured building a truly public face for the first time ever – just a stone’s throw away from Tate St Ives.